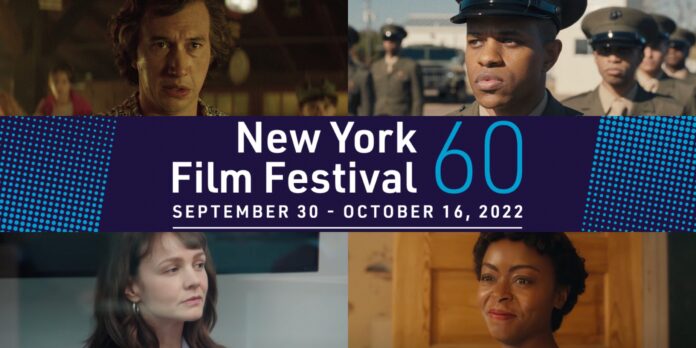 The 60th anniversary of the New York Film Festival begins tomorrow, September 30th, with the Opening Night film Noah Baumbach’s “White Noise.” It will continue until October 14th with the Closing Night film, Elegance Bratton’s “The Inspection.” Laura Poitras’ Venice Golden Lion-winning documentary film “All The Beauty And The Bloodshed” will be the Centerpiece Film. Representing the celebration of 60 years is New York native James Gray’s film “Armageddon Time,” which will play near the end of the festival. Two highly anticipated world premieres are Maria Schrader’s “She Said” and Chinonye Chukwu’s “Till.” There are also several films playing in the Revivals and Currents sections, while also featuring lots of Talks with filmmakers on their movies and the industry’s current state. It’s an exciting time to be a film fan if you live anywhere near New York over the next two weeks. What does this festival mean for the Oscar race, though?

One of the things I’d like to show you all is how many Best Picture nominees have played at NYFF since the expanded lineup was introduced at the Oscars back in 2009.

2009
Precious: Based on the Novel “Push” by Sapphire (Centerpiece)

2016
Manchester By The Sea
Moonlight

2021
Drive My Car
Dune
The Power Of The Dog (Centerpiece)

None of these three films come from one of the Gala nights, but of the three playing in those prestigious slots, I’d say “White Noise” is the closest due to the power of Netflix behind it. The Don DeLillo adaptation represents Baumbach’s most ambitious film to date, and hot off of his most tremendous success yet with Academy voters with “Marriage Story,” they might be open to welcoming him back again so soon. Yes, the reactions out of Venice weren’t necessarily the strongest. Still, Netflix is in desperate need of a significant Best Picture contender right now, and it’s possible NYFF might give this film the shot in the arm it needs to be taken seriously for a nomination.

Unlike Venice, Telluride, or TIFF, NYFF doesnt play the largest role in helping us figure out what might be nominated for Best Picture. It can help us find a contender here or there, and it certainly can help elevate a film’s status post those other major festivals (since NYFF is the last major one before the regionals begin). But the real question is how many Best International Feature Oscar nominees have played at NYFF over the last few years? NYFF is known for taking the “best of” Cannes and having those films re-enter the conversation alongside specifically curated films from Berline and Venice. In many ways, NYFF is a culmination of all of the major film festivals that came before it, making it highly unique in the Oscar race. So how many International Feature Film Oscar nominees have played at NYFF since 2009? Let’s take a look…

2021
Drive My Car
Flee
The Worst Person In The World

So far, here are the films that their countries have selected to contend for the Oscar for Best International Feature Film playing at NYFF this year…

Each of these still stands a good chance of getting an Oscar nomination for Best International Feature Film, but judging on the recent trends, only one or two of them will likely make the final cut. Currently, Next Best Picture believes those two films will be “Decision To Leave” and “Saint Omer,” but it’s still a long season ahead, and a lot can change.

The Best Documentary Feature race is also starting to take shape, and special consideration should be given to the films playing at this year’s festival. I’d say the four documentary feature films worth keeping an eye on for this year’s Oscar race are…

I’ve seen all four of these, and they all rank among my top ten best documentaries I’ve seen this year. Each of them currently has a decent shot of being nominated for Best Documentary Feature at this year’s Academy Awards.

So, where does this leave us with NYFF being the last major stop on the fall film festival circuit before the other regional festivals begin and the precursor awards start shortly after? The New York Film Festival has more to offer than just serving as another launching pad for films in the awards conversation. There’s a treasure chest of quality filmmaking, challenging stories, and memorable experiences to be found amongst the lineup if you’re bold enough to look. Here are a few recommended titles playing at this year’s festival that I have not yet mentioned….

What are you most excited to see at this year’s New York Film Festival? Do you think it will have any impact on this year’s awards race? Available tickets for NYFF60 can be found here. Please let us know your thoughts either in the comments section below or on our Twitter account.