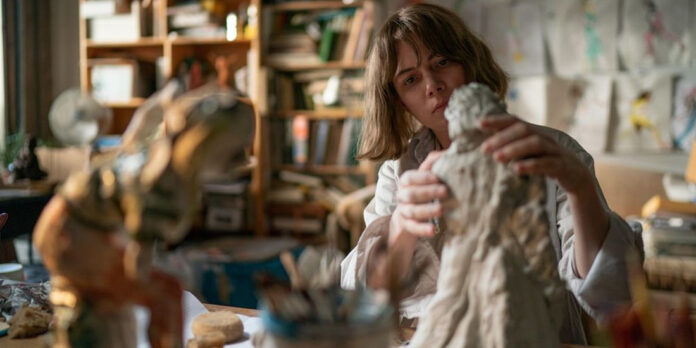 THE STORY – A sculptor preparing to open a new show must balance her creative life with the daily dramas of family and friends, in Kelly Reichardt’s vibrant and captivatingly funny portrait of art and craft.​
​
THE CAST – Michelle Williams, Hong Chau, Judd Hirsch, André Benjamin, Heather Lawless & Amanda Plummer​

​It’s been said: “80% of success is just showing up.” But for the character of Lizzy (Michelle Williams) in Kelly Reichardt’s newest film, “Showing Up,” which premiered in competition recently at this year’s Cannes Film Festival, showing up doesn’t seem to be leading to much. She has a sort-of career at a small arts college in Portland, complete with her mother as her boss and Andre 3000 as the flirty pottery expert. Her cat owns her personal life with around-the-clock needs for attention, and her neighbor/landlord, Jo (Hong Chau), still hasn’t fixed her water heater after two weeks of constant requests. Is this all her life is cracked up to be? Either way, it’s not a comforting thought.

Reichardt’s quietly distinctive work has been infrequent yet always well-reviewed whenever she bestows a new film upon us. 2008’s “Wendy and Lucy” marked the first of many collaborations between the director and Williams, followed by “Meek’s Cutoff” and “Certain Women.” But even with the positive critical reception for each, Reichardt’s films have never lit the box office on fire. “First Cow,” seemingly an epic in comparison to her other work, was prevented from having a chance due to its unlucky release during the origin of the COVID-19 pandemic. However, it found an audience through an extended awards campaign which garnered Reichardt a whole new legion of fans.

Maybe as an act of self-commentary, the lack of widespread recognition and adoration can also be said of Lizzy’s character in “Showing Up.” Sculpting intimate creations, Lizzy’s work has always been appreciated but never put on the same pedestal as her contemporaries, such as Jo and her unwieldy creations. She is struggling to meet the deadline for her new exhibit, and with so much self-doubt plaguing her mind, she questions whether she should even attempt to show up.

In its low-key nature, “Showing Up” can be a comforting ode to small artists persevering in putting their creations into the world. Just as Reichardt often sleeps on people’s couches and teaches at Bard College, Lizzy has to put up with no hot water and a never-ending litany of problems to finish her work just so she can have a shot at having a meaningful life. And taking the connecting through-line of the bond between humans and animals from “First Cow,” Reichardt finds a way for Lizzy’s life to be upended and ultimately transformed by a pigeon that injures itself by crashing into her window.

Both sides of the debate will correctly say that not much happens in “Showing Up.” But for those that are familiar with Reichardt’s work, is that much of a surprise? Having an exciting plot has never been high up on her priority list. The same can be said of her films’ pacing. Reichardt, once again, serves as her own editor, so if anyone has ever had any complaints about how her films are paced, “Showing Up” won’t change anyone’s mind on her style. She lets the opening credits roll in an extended fashion across the first several minutes of the film and generously makes time for Williams to meticulously craft the arms to one of her sculptures in an unbroken take. With this slow sense of pacing, Reichardt has often been able to mine deep and expose the hidden feelings that faster-paced works are simply unable to achieve, making it, for many, a more rewarding cinematic experience that reveals great truths about humanity.

Not many could carefully tell the uplifting and heartbreaking friendship within “First Cow,” and while “Showing Up” tries to find a similar vein, it doesn’t deliver the same refined fulfilling message about the way unforeseen people and circumstances shape our lives. Unlike Lizzy’s clay creations that start as wet messes and end up as fully formed creations, Reichardt’s work stops just short of the kiln and ends up feeling more like a shallow puddle of good ideas. “Showing Up” won’t win Reichardt any new fans, but it could potentially offer another helping of what her supporters love so much of her work. For them, Reichart has supplied the goods; now it’s time for them to show up.

"SHOWING UP"<b>THE GOOD - </b>Reichardt remains true to her vision and already well-established style with a great cast ready to deliver her message about the artist's role in the world. Michelle Williams is a dependable presence.<br><br> ​ <b>THE BAD - </b>The meandering plot and pacing keep the building blocks from amounting to much of anything. Even for such a simple story, the ultimate message feels much less than the sum of its parts.<br><br> ​ <b>THE OSCAR PROSPECTS - </b>None<br><br> <b>THE FINAL SCORE - </b>6/10<br><br>