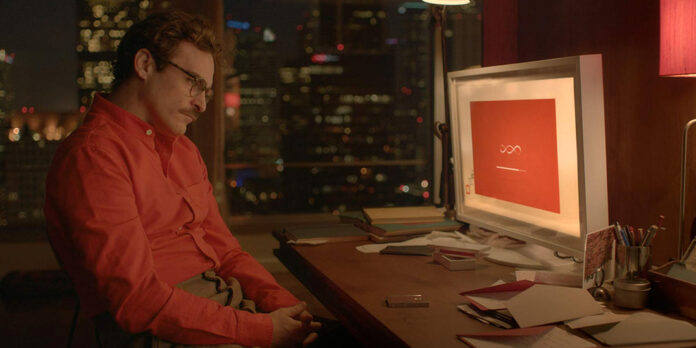 THE STORY – A sensitive and soulful man earns a living by writing personal letters for other people. Left heartbroken after his marriage ends, Theodore (Joaquin Phoenix) becomes fascinated with a new operating system which reportedly develops into an intuitive and unique entity in its own right. He starts the program and meets “Samantha” (Scarlett Johansson), whose bright voice reveals a sensitive, playful personality. Though “friends” initially, the relationship soon deepens into love.

​Heartbreak is timeless. It’s among the most universal of experiences, and so much of its power derives from the fact that it brings out the worst (or at least, the most shameful) in people. We’ve all done things we regret after getting dumped, and we’ve all fed the self-loathing suspicion that whoever dumped us is thrilled to be rid of us. It’s a topic that’s generated loads of great pop songs, but cinema has sometimes struggled to capture the fragility of heartbreak without leaning on cliche. Few films have managed to capture all of the nuance and the hypocrisy of a breakup, much less the agonizing process of putting yourself back together. Spike Jonze’s “Her” is one of those rare instances.

“Her” takes place in a futuristic Los Angeles, where Theodore Twombly (Joaquin Phoenix) works as a professional card writer. Knee deep in the traumas of divorce, Theodore finds it increasingly painful to script jovial messages for strangers, and he spends his off-hours in isolation. With no end to his isolation in sight, Theodore decides to purchase an operating system upgrade that includes an AI virtual assistant. The OS is given the name Samantha (Scarlett Johansson), and before long, Theodore is opening up in ways he never again thought possible.

The premise of “Her,” perhaps the most famous aspect of the film, was something that writer/director Spike Jonze worked on for over a decade. He was fascinated by the contradictory feelings we have about artificial intelligence versus people and what might happen if those emotional wires got crossed. Would it feel authentic? Could we, as human beings, tell the difference? Theodore is dismissive of Samantha at first, much like the audience, but the more they talk, the more he comes to realize that she’s a more genuine companion than the flesh and blood around him.

It would have been a miscalculation to play the film’s premise entirely straight. The imagery of a man (much less a man dressed like Theodore) going on a date with his phone is inherently awkward, and Jonze inverts this issue by using the awkwardness to his advantage. Whenever Theodore admits to dating an OS, he’s met with concern and/or confusion.

His friend Amy (Amy Adams) is supportive, but it’s unclear whether she’s doing it out of pity or is merely occupying the same lonely headspace. Some of these reactions make for some credible laughs; others illuminate cracks in the relationship that Theodore can’t bring himself to face. Not yet, at least.

Phoenix plays Theodore as an open wound, a man who carries grief with him like the stench of an old cologne. We feel for him on these grounds, but we also come to see his short-sightedness and his nagging concern with how others perceive him. There are several instances in which Theodore is cruel to Samantha, citing her lack of physical form as though it was something she had any control over. His happiness, so infectious during the early phases of their relationship, gradually sours when he realizes that others perceive him as lesser for not adhering to traditional dating standards. This insecurity takes on a deeper connotation in 2021 when dating apps and online relationships have become more of a commonplace practice.

Jonze does a remarkable job of capturing the fear/excitement of reentering the dating pool. Whether they be for carnal or romantic fulfillment, Theodore’s attempts to meet women repeatedly go wrong. The former comes to fruition with painfully awkward phone sex courtesy of “Sexy Kitten” (Kristin Wiig), while the latter culminates with Theodore’s date (Olivia Wilde) calling him a “really creepy dude.” Jonze shoots them in softly lit closeups, furthering the sense of foreign intimacy for the viewer. It’s tough to sit through, but these scenes compound the insecurity that drives Theodore towards his non-judgemental OS and hammers home concerns over why his wife Catherine (Rooney Mara) left him.

The divorce meeting between Theodore and Catherine is another masterclass of performance and direction. The tension is palpable from the moment they sit down, and the real-time progression from niceties to hurtful insults is scarily accurate for anyone who’s ever had to sit down and rehash the past with an ex. The added subtext of the scene, being (reportedly) inspired by Jonze’s divorce from Sofia Coppola and played by real-life couple Phoenix and Mara, gives it a level of authenticity that’s largely unprecedented. The pain feels honest because, well, it is.

If I had to pick an aspect of the film that was weak, I would point to the end of Theodore’s romance with Samantha. It builds effectively from the midpoint of the film, and the revelation that Samantha has been talking to thousands of other men online is devastating, but it sort of wobbles out from there. The film hasn’t been shy about embracing big emotional moments or even melodramatic ones, so the decision to make Samantha’s exit so subdued feels like a missed opportunity. It may have been intentional on Jonze’s part as a sort of metacommentary on Theodore’s lack of closure, but it doesn’t come together as smoothly as the rest of the film’s artistic gambles. The final scene, where Theodore reconciles with Amy, is a similarly understated (read: slightly underwhelming) choice. These issues don’t cause irreparable damage, but they do slightly dull the film’s emotional impact.

I first saw “Her” in theaters in 2013, and truth be told, I was unimpressed by it. I hadn’t yet had my heartbroken, and I found some of Jonze’s choices to be on the mawkish side (hi there, ukulele scene). Surely heartbreak can’t be that bad?? However, the more time has passed, the more I’ve come to marvel at the film’s singular take on love and what it means to connect with another human being.

“Sometimes I think I have felt everything I’m ever gonna feel,” Theodore admits at one point. “And from here on out, I’m not gonna feel anything new. Just lesser versions of what I’ve already felt.” It’s a couplet that works as a sort of microcosm for the film as a whole: simple, sad, and achingly sincere. We all want to feel that which is new, but we have to make peace with the old before we can. “Her” may not solve this internal dilemma, but it’s a touching reminder that we aren’t alone in our desire to solve it.