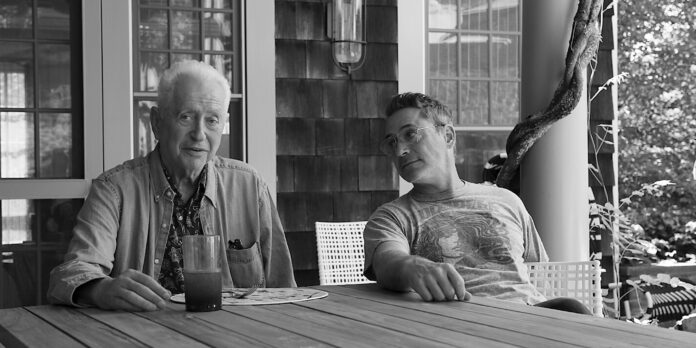 THE STORY – Follow the tender but appropriately irreverent account of the life and career of Robert Downey Sr., the fearless and visionary American director who set the standard for countercultural comedy in the 1960s and 1970s.

Talking about making documentaries, Robert Downey, Sr. says, “I like that you don’t know what’s gonna happen.” The magic of “Sr.,” Chris Smith’s documentary about him, is that even though we know what’s going to happen, watching Downey (referred to by most people by the titular suffix) and his son Robert Downey, Jr. connect with each other as they figure out what the film is going to be still manages to be emotionally impactful, whether you know who Downey is or not. Without ever once hitting you over the head with its themes, “Sr.” offers hard-won life lessons from a father and son who have been through it all, and the kind of emotional catharsis that can only be achieved in cinema. It is a beautiful work of art.

The film tells its story along parallel tracks. Downey, Jr. wants to make a documentary about his father as a way of getting to know him better in his waning years, but Downey, Sr. is cagey, and in order to get him more involved, Jr. tells him he can use the film crew to make his own version of the documentary, in whatever way he wants. While we never see a full cut of Sr.’s film, watching him direct the crew towards shooting different things and work with the footage in a makeshift editing bay gives invaluable insight into his filmmaking style and his philosophy of life. Downey’s approach to filmmaking is a lot like life: you’re just finding your way through it, not really knowing what it’s going to be until you get to the end, and maybe not even then. It is such a seemingly obvious message, but the way the film goes about delivering it never feels heavy-handed. This is partly due to Sr.’s delightful, irreverent personality but is also a credit to how seamlessly Smith weaves in footage from the man’s films to illuminate his point of view.

Films like “Chafed Elbows,” Putney Swope,” and “Greaser’s Palace” were emblematic of the counterculture and independent filmmaking movements of the ’60s and ’70s. Weird, witty, and wild, they were made mostly on shoestring budgets and with people Downey knew. It was a hugely influential environment for the younger Downey to have grown up in, and father and son have several emotional moments in the film where Sr. admits that maybe it wasn’t the best thing to raise a child around so much open drug use and non-conformity. Though Jr.’s history of drug addiction isn’t fully delved into, it’s clear that he has worked very hard to move beyond it and that his dad has been invaluable in his journey, not just in his rehabilitation but in his life in general.

Jr. revels in the obvious delight his dad has working with a crew again for the first time since 2005’s “Rittenhouse Square,” and all that joy is infectious. Sr. isn’t the most open book, but the things he chooses to have the crew film and how he wants them inserted into his cut of the film do build a picture of how he sees himself in the world. He is still a curious observer, looking at all sorts of things most people would walk past, with a lightly cantankerous edge that shows up every once in a while. But there is also the ever-looming specter of the inevitable end: He has ALS, and his days are numbered. The film’s relatively late reveal of his prognosis is beautifully done, leading to an emotionally impactful ending whether or not you knew of his death in 2021.

As Sr.’s health deteriorates further, Smith wisely pulls back, offering Jr. and his son the space they need to come to terms and mourn without the intrusion of a documentary crew. The scenes we do get, though, offer a lovely resolution to both Jr. and Sr.’s journeys: Sr. gets to make his own cut of the documentary that reflects his more off-kilter instincts, and Jr. gets to memorialize his father as he knew him, and how he wants the world to see him. While that description makes “Sr.” sound like a vanity project, it actually doesn’t feel like that. Instead, it’s a beautiful tribute to an artist who could have been lost to history otherwise and a lesson to others of his generation to stay open-minded and present every day. It’s also a deeply-felt meditation on father-son relationships and how even the most strained can eventually be healed if both parties are open to it. By allowing themselves to be so vulnerable and honest – each in their own way – on camera, Sr., and Jr. manage to make “Sr.” compelling, essential viewing.

<b>THE GOOD - </b>An emotional look at the life and career of one of America's most iconoclastic independent filmmakers, told by his megastar son with beautiful openness and vulnerability.<br><br> <b>THE BAD - </b>It could have done even more with its conceit of father and son making different versions of this very film.<br><br> <b>THE OSCAR PROSPECTS - </b><a href="/oscar-predictions-best-documentary-feature/">Best Documentary Feature</a><br><br> <b>THE FINAL SCORE - </b>8/10<br><br>"SR."