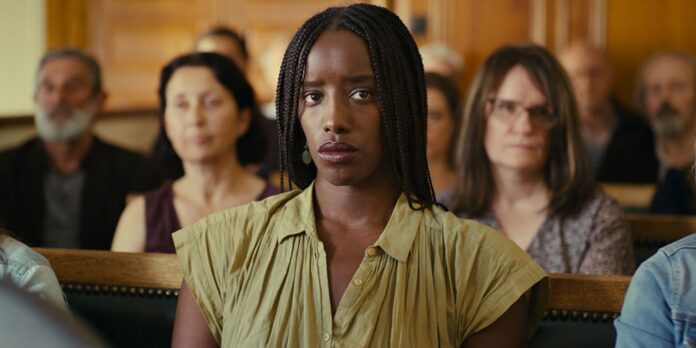 THE STORY – Follows Rama, a novelist who attends the trial of Laurence Coly at the Saint-Omer Criminal Court to use her story to write a modern-day adaptation of the ancient myth of Medea, but things don’t go as expected.

In 2013, Fabienne Kanou, a young Senegalese immigrant, placed her 15-month-old daughter on a beach and watched as the waves took her out to sea, a killing that sent shock waves throughout France and led to a 2016 trial in the titular French town. Among the spectators attending that trial was acclaimed documentary filmmaker Alice Diop, whose family came from Senegal, and she was pregnant herself at the time. The trial touched something in Diop, and she chose it as the subject for her first narrative film, “Saint Omer.”

It’s probably not surprising that a real-life case would pique the interest of a documentary filmmaker. Still, by choosing to tell what happened in narrative form, Diop can recreate the trial as she saw it through her own eyes or, in this case, through the eyes of her lead character Rama (Kayije Kagame).

Like Diop at the time, Rama is a pregnant writer who becomes fascinated with the trial of the accused child killer, a Senegalese immigrant named Laurence Coly (Guslagie Malanda). Diop chooses to lay out her story methodically, with much of Act One focusing on Rama’s relationship with her family – specifically, her mother, with whom Rama has had a difficult relationship all her life and from whom she is keeping the news of her pregnancy.

Rama, who is researching a piece on mythic child killer Medea, travels to Saint-Omer to witness the sensational trial, hoping to get further insight as to why a person could bring herself to commit such an act. She soon becomes intrigued by Laurence, who, despite her “not guilty” plea, seems to admit guilt by wondering aloud as to why she killed her child, chalking up the reason finally to sorcery or witchcraft. Rather than sitting in judgment of Laurence, however, Rama soon finds herself empathizing with the defendant as she tells her story of dealing with the pressure from her dominating parents to overachieve, getting pregnant, and finally carrying and raising the child in secret.

Just how to reveal what emotionally connects the two women proves to be a tricky narrative challenge for Diop. The familiar method – two characters sit down to have a conversation – is closed off to her, as legal protocol forbids a trial spectator from meeting with a jailed defendant (much like the way that Diop could never meet the real-life accused). “Saint Omer” must then become a film whose primary method of communication is physical – a nod here and a knowing smile there tell us much of what Rama is taking to heart from Laurence’s testimony. Add to that what Rama has to say to others outside the courtroom, and Diop provides the pieces to make the connections. How they’re assembled, though, she leaves up to us.

To do this, we are helped immeasurably by the two moving performances at the film’s center. Laurence is riveting as Malanda calmly recounting the most startling aspects of the crime in the most matter-of-fact way possible, an acting choice that is utterly chilling. While much of Malanda’s performance is rooted in Diop’s lengthy monologues from the witness stand, Kagame’s powerful Rama is a much more reactive character, quietly observing and holding it all inside until the moment she can hold back no longer in a remarkable emotional outburst. Two very different actresses and two very different approaches, but together their acting pas de deux truly becomes the heart of “Saint Omer.” Incidentally, their work is strikingly illuminated via top-notch cinematography by the great Claire Mathon.

So what, in the end, is the film’s final takeaway? Do the women bond over the trauma of pregnancy? Is it because they are two of the few Black women in an otherwise white community? Or is it Rama’s fear that, given her own troubled history with her mother, she may have an equally problematic relationship with her new child? And does she fear that she may someday be driven to commit the same deadly act as Laurence? We’ll never fully know. Is Diop’s enigmatic approach frustrating? Definitely. Or at least if you’re looking for definitive answers. But the questions she asks are visceral, and they wind up lingering long in the mind even after the final credits are over.