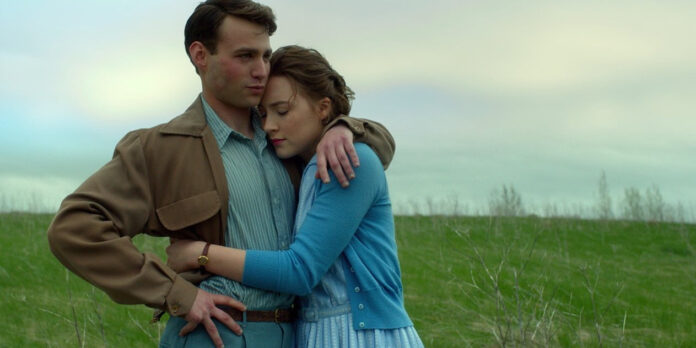 THE STORY – Young Irish immigrant Eilis Lace (Saoirse Ronan) navigates her way through 1950s Brooklyn. Lured by the promise of America, Eilis departs Ireland and the comfort of her mother’s home for the shores of New York City. The initial shackles of homesickness quickly diminish as a fresh romance sweeps Eilis into the intoxicating charm of love. But soon, her past disrupts her new vivacity, and Eilis must choose between two countries and the lives that exist within.
​
THE CAST – Saoirse Ronan, Domhnall Gleeson, Emory Cohen, Jim Broadbent & Julie Walters

I think every person who watches “Brooklyn” has a highly personal relationship with it. Ask anyone about their thoughts on the movie and they’ll inevitably end up talking about when they moved away from home, an experience falling in love with a place and a person at the same time, or even the story of their own grandparents coming to America. There’s something about this film (and that something is largely contingent on Saoirse Ronan’s nuanced but emotive performance) that demands that you give yourself over to it.

I will begin by addressing a personal connection I have with this film first. There’s a good reason I didn’t re-watch “Brooklyn” the entire year I was living in London, even though it’s one of my favorite films. After I graduated from college, I ended up applying to graduate school in London and packing up my life to move across the ocean to a new country, far away from my parents, sister, and friends. The first few weeks, I was hit by wave after wave of homesickness, but then I began to build a new life for myself. When I went home for a visit, I struggled to figure out who I was there: was I the new London me in America or did I have to revert back to the old version of myself? That conflict is the very soul of “Brooklyn.”

Based on the novel by Colm Tóibín, “Brooklyn” tells a story that is both very specific and entirely universal: it’s about a young Irish woman named Eilish (Saoirse Ronan) who moves to Brooklyn in 1951 because someone has found her a job there. Though she struggles with homesickness, she soon finds her stride in America and falls in love with a young Italian-American man named Tony (Emory Cohen). However, when tragedy calls her back home for a visit to Ireland, she finds herself pushed towards Jim Farrell (Domhnall Gleeson) and flirting with the idea of what life back home could be like. It’s a beautiful story about love, yes, but more than that, it’s a coming-of-age tale about moving away from home and forging your own path in life.

This film feels delightfully old-fashioned, in all the best ways. Directed elegantly by John Crowley, there’s something so familiar about its warmth and use of color. It almost feels as if you are watching someone else’s memories rather than a film. The costumes by Odile Dicks-Mireaux deftly mirror Eilish’s personal transformation in the film from a young girl in a small town to a sophisticated working lady in New York. How Odile Dicks-Mireaux missed an Oscar nomination for Best Costume Design is beyond me.

The best thing about “Brooklyn” isn’t its great screenplay by Nick Hornby or even its lovely score by Michael Brook, but its ensemble cast. Jim Broadbent gives a dour and moving performance as the Irish priest in Brooklyn who has arranged a job for Eilish. Julie Walter is delicious as the very maternal head of the boarding house where Eilish lives. Eileen O’Higgins, who plays Eilish’s best friend in Ireland, has wonderful chemistry with Ronan that helps demonstrate to the audience how Eilish has changed from the sidekick for her pretty friend to a sophisticated city woman.

Both Cohen and Gleeson are completely charming in completely opposite ways as Tony and Jim. But it’s Ronan who is at the heart of this film and not just because she plays the lead character. For one so young, she gives an excellent performance and makes Eilish universally relatable without her every feeling like a “Mary Sue” undefined character. It’s thanks largely to Ronan that Eilish is likable to the audience as she portrays both her heartbreak at being separated from her family and her reluctant infatuation with Tony in a way that feels authentic and tangible. Ronan is one of those actresses who is able to portray many emotions through her facial expressions alone and also has a wonderfully emotive voice. I can’t imagine how someone could watch that scene at the end with her voiceover and not have their heart be touched.

“Brooklyn” might seem like an inconsequential, overly-traditional period drama but it’s much more than that. While there are no explosions and no real antagonist, it’s one of those movies that goes straight to the heart of what it means to be human. Homesickness, love, identity – these are issues that most people have to deal with in their lifetime and that’s what makes this film so appealing, no matter who you are or where you come from. It presents those themes to you in a simple package with a nuanced three-dimensional set of characters portrayed by a fantastic cast, elegant production/costume design and excellent use of color used to evoke feelings and memories of the past. It makes us laugh, it makes us cry, it makes us want to call our mothers – and it makes us believe in the power of building a life for yourself. “Brooklyn” is a perfect coming of age film that all should see.