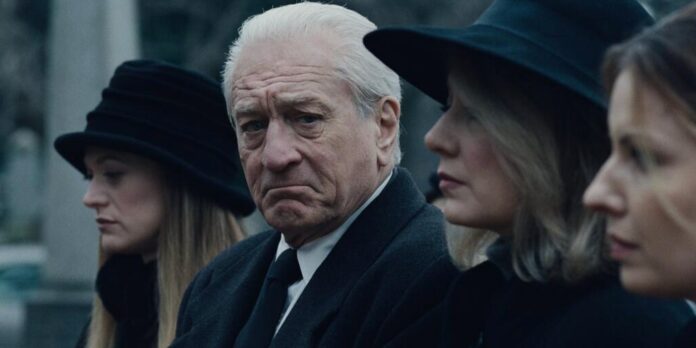 THE STORY – An epic saga of organized crime in post-war Americatold through the eyes of World War II veteran Frank Sheeran, a hustler and hitman who worked alongside some of the most notorious figures of the 20th century. Spanning decades, the film chronicles one of the greatest unsolved mysteries in American history, the disappearance of legendary union boss Jimmy Hoffa, and offers a monumental journey through the hidden corridors of organized crime: its inner workings, rivalries and connections to mainstream politics.
​
THE CAST – Robert De Niro, Al Pacino, Joe Pesci, Harvey Keitel, Bobby Cannavale, Anna Paquin & Stephen Graham

​​On paper, “The Irishman” is almost too good to be true. Master director Martin Scorsese returns to the genre he once revitalized, to explore a new territory he’s never touched on before using a new technology he’s never worked with before. His cast consists of Robert De Niro, marking the actor and director’s first collaboration in 24 years since “Casino.” Joe Pesci also returns out of retirement, marking his first collaboration with the two since “Casino” as well. And Al Pacino makes his debut in a Martin Scorsese picture for the first time ever. Together, they tell a new American epic that spans several decades, touching on familiar themes of loyalty, crime, and betrayal while also quietly reflecting on the past, their legacies and their mortality. The beauty of “The Irishman” is not only do these iconic screen legends get to do this through the finished project but the audience is able to do the same as well. With a runtime of three and a half-hours from Netflix (another parallel to the film’s thematic story of the changing times for this is cinema lover Martin Scorsese’s first streaming film), there’s enough time, thematic material and value here that if this was to be any of these men’s swan song, it’s a hell of a way to go out.

Using voiceover narration, Frank Sheeran (Robert De Niro), now in his eighties, tells us his account of his relationship with Philadelphia crime boss Russell Buffalino (Joe Pesci) and Union Leader Jimmy Hoffa (Al Pacino) from an old folks home in the early 2000s, coming towards the end of his life. From his time as a driver to a chance meeting with Russell at a gas station, one event leads to another as Frank becomes more entrenched in a world of crime, affecting his family life and morality. These events are told in flashback alongside another flashback as Frank and Russell travel on a road trip to a wedding during the early eighties, which will have life-altering consequences.

Knowingly paced so that the audience feels the weight, drama and dispirited regret of a character’s life reflecting on their legacy, “The Irishman” is a unique cinematic experience in the canon of Martin Scorsese. It’s the kind of film that he could only make now at this point in his life, in his mid-70’s, after a full life of storytelling, success, and failures. Its such assured filmmaking that it manages to ascend to something beyond our own experience of simply watching the film, as we are forced to take into account the character of Frank Sheeran’s life and correlate it to De Niro, Pacino, Pesci and Scorsese. Such internal reflection and appreciation (something we are certainly not failing to show here), can only be done with a long passage of time and that’s what “The Irishman” is concerned with: time. As Jimmy Hoffa says at one point “time is of the essence,” and Scorsese and his team are well aware of this, using it their advantage to tell a story that is jam-packed with content but mature enough to resonate deeply with the audience. The length of the film is certainly felt but it is felt in the way that Scorsese wants us to feel it, making the investment an enriching one instead of a negative one.

Every element of Scorsese’s latest is designed to reflect this theme and the changing of the times. The re-creation of the time period, with hundreds of scenes, setups, sets, costumes, and songs from the era are all faithful, accurate and highly immersive. The makeup used to age up the actors is truly convincing and especially extraordinary in the third act. However, on the opposite end, the new de-aging technology specifically used to make the actors look thirty years younger as we follow them through decades of plot, takes a little getting used to at first (De Niro’s punched up blue eyes being the most noticeably distracting effect). However, after several scenes seeing it in motion, the effect quickly disappears as we get lost in the film’s narrative, its characters and magnetic performances from the actors.

After delivering solid to poor performances over the past few years, Robert De Niro reminds us of what a quality actor he can be when given the right material as he internalizes his pain, grief, and darkness under a tough-guy persona that has ended many lives from serving over 400 days in World War II to being a hitman for the Buffalino crime family. It’s the actor’s strongest work in years and very new territory for him as he never once raises his voice or overreacts to any situation. Sheeran is an endlessly fascinating character for this reason, as De Niro pushes the audience to analyze and dissect his character’s motivations and actions at every turn with a subtle, silent and powerfully reserved performance.

Equally calm in a very surprising manner is Joe Pesci, coming out of retirement and playing against type as “the quiet don” (the role of the hothead gangster is played this time by Stephen Graham instead). Despite having no real outbursts of swear spewing, unpredictable anger, Pesci’s screen presence is welcome and just as intimidating as ever. With a mere glance, the man can still incite commanding fear in the audience without having to resort to his old bag of tricks which made him a household name.

The real star here though is Al Pacino, who like De Niro, is giving one of his best performances in a long time, having the benefit of working with a great script, a great director and opposite great actors. His Jimmy Hoffa gets plenty of moments to chew the scenery, as he shouts, emotes and eats ice cream with a level of energy we have not seen from the 79-year-old actor in a long time. Steven Zaillian’s script gives Pacino plenty of quiet moments as well though, presenting the actor with a well-rounded, sympathetic and larger than life character that the Academy Award winner is able to dig his claws into, showing us a youthful energy that is volcanic and riveting.

While all three of the main principles get plenty to do as they ignite the screen with their performances, Scorsese brings in other well-known names including Harvey Keitel (as crime boss Angelo Bruno), Bobby Cannavale (As Sheeran’s first boss Felix “Skinny Razor” DiTullio), Ray Romano (as the Buffalino crime family’s lawyer Bill), Jesse Plemmons (as Hoffa’s son Chuckie O’Brien) and Anna Paquin (as Sheeran’s youngest daughter Peggy) to help round things out. Sadly, at even nearly three and a half hours, the supporting actors don’t get as much to do and at times feel underutilized compared to the main names.

The common tropes of Scorsese’s crime films are all presented here (including a shot of the famous Copacabana club from “Goodfellas”) and for the first hour or so before Jimmy Hoffa gets introduced into the story, “The Irishman” struggles to find itself. The film’s slow-moving pace starts off right away, hitting on familiar beats we’ve all seen before as the characters, their relationship to one another, the setting and time period all need to be established. However, as we settle into act two, the excitement and tension really begins to tighten, culminating in a glorious third act that brings the movie full circle and reveals “The Irishman’s” true intentions all along. It may be another crime film from the master of crime films but this is something different. This is something special. This is a filmmaker thinking about the end, as his lead character (and the actor playing him and other actors involved) think about the end, thus making us, the audience, all think about the end as well. It’s a thoughtfully designed, melancholy film, where the violence is unceremonious and inglorious, with no remorse or resolution offered. In the end, there will be nothing but black. The kind of black that will take your breath away as the credits roll on Scorsese’s latest and hopefully not last, masterpiece.