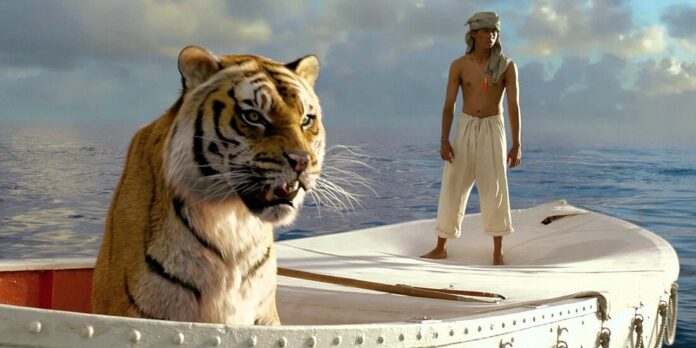 THE STORY – A young man who survives a disaster at sea is hurtled into an epic journey of adventure and discovery. While cast away, he forms an unexpected connection with another survivor: a fearsome Bengal tiger.​
​
THE CAST – Suraj Sharma, Irrfan Khan, Rafe Spall & Adil Hussain

There was so much working against the screen adaptation of “Life of Pi” (2012). For one, it was a logistical nightmare. The story of a teenager stranded on a lifeboat with a Bengal tiger made for insightful literature, but turning it into a film meant having to figure out how to make such a harrowing premise realistic. The difficulty can be gleaned from the roster of names that were attached to direct but ultimately passed: Alfonso Cuaron, M. Night Shyamalan, and Jean-Pierre Jeunet. The gig eventually fell to Ang Lee, who had already nabbed a Best Director Oscar for his stirring adaptation of “Brokeback Mountain” (2006). Lee was a slam dunk when it came to somber, humanist dramas like “Brokeback Mountain” and “The Ice Storm” (1997), but his lone foray into CG filmmaking, “Hulk” (2003), was an airball. Would “Life of Pi” be another? I don’t think I’m spoiling anything by saying that Lee prevailed. The very fact that we are revisiting “Life of Pi” as part of our 2012 retrospective speaks to its quality (never mind the fact that Lee took home a second Best Director Oscar). It’s a film that’s talked about reverently, if not as often as some of its decade-old peers, and part of this retrospective will be an attempt to determine why.

“Life of Pi” starts in earnest. A young writer (Rafe Spall) meets with Pi Patel (Irrfan Khan) on the vague hunch that Pi’s life would make a good book. It’s a predictable framing device, and one might even roll an eye at its use early on, but Lee and screenwriter David Magee utilize this supposed predictability to their advantage, even if the ways in which they do so take a while to become clear. The early scenes operate on a similar function of being engaging on the surface but retroactively important once we embark on the main section of the film. Pi’s childhood in India is quickly sketched, including a telling encounter with a tiger he names “Richard Parker.” He gets dangerously close to the tiger at one point, and as punishment, his father makes him watch the tiger maul a goat. The father decides to move the family (and the zoo) to Canada when Pi is a teenager, the disastrous storm they run into washes everyone out to sea except Pi (here played by Suraj Sharma) and Richard Parker. Both are able to board a lifeboat, where they remain for a staggering 227 days. The bulk of the film takes place within the cramped space of the lifeboat, as Pi and Richard (Mr. Parker? RP?) struggle to fight their base tendencies and co-exist.

One of the things “Life of Pi” does best is fight the urge to romanticize Richard Parker. The film could have so easily settled for a sunny, romanticized version of him, but it ensures that the gravity of him being a wild animal never wavers. We are terrified, like Pi, that he will snap at any point and rip the teenager to shreds. It’s the baseline tension that courses through the veins of an otherwise basic narrative. The film builds the relationship between Pi and Richard at such a measured speed that one fully buys into the notion of them reaching a sort of primal understanding. The CG rendering of the tiger is still superb after a decade (real-life tigers were used during some scenes), and the nuance with which he’s treated leads to what feels like a borderline character arc. Richard learns what must be done to survive, and the subtle ways in which the film illustrates this is a strength that few others share.

Visually, there’s a lot to unpack. Lee and cinematographer Claudio Miranda take the expansive canvas of 3D and utilizes it sparsely and delicately. The film avoids gimmicky shots or “gotcha” POV moments and instead goes for a more subtly enveloping experience. It pays dividends. The scene where the glow of jellyfish lights up the ocean and a whale springs into the air is breathtaking to watch. It’s a splash of euphoria in an otherwise harsh reality, and the moment’s singularity helps it stand out on repeat viewings.

Lee’s directorial instincts are sharp as ever. He can cultivate a believable relationship between Pi and Richard, relying primarily on subtle body language and, of course, the masterful visual effects. A lesser filmmaker would have relied on more obvious tactics (voiceover, expositing aloud) to get thematic points across, but Lee’s perceptiveness allows him to maintain a level of human authenticity. Or, in the case of Richard, animal authenticity.

I stand by my praise for both Lee and the Pi/Richard dynamic, but I think the handling of this central relationship is partially to blame for the film’s muted reception in the past decade. The film is rarely mentioned when discussing the best films of the 2010s, despite netting four Oscars and a heap of critical praise when it came out. “Life of Pi” places so much importance on Pi and the relationship he’s able to develop with Richard that their farewell (or lack of a farewell) is one of the most upsetting moments in the film. Pi is rescued shortly after that, and in the story, he resorts to telling his rescuers that he was on the lifeboat of human survivors who succumbed to murder and cannibalism. It’s a sobering switch-up, and the comments made by an adult Pi make a larger point about people often choosing to believe the “better story.” It’s a clever thought exercise and a neat misdirect, but introducing different events undermines the film we just watched unfold. When the adult Pi notes that his family died and he was saved regardless of which version is believed, it ignores the intimate and specific experiences we shared alongside him and Richard. It’s an ending that prioritizes profundity over emotional resonance, resulting in “Life of Pi” ringing somewhat hollow by the time the credits roll.

Still, I can’t deny the rest of the film is a technical triumph. There are so many dazzling moments, understated or otherwise, that imprint themselves on the viewer, and the dual Pi performances by Khan and Sharma are impactful on their own unique terms. There’s a lot to love about the “Life of Pi,” despite its imperfections. After all, what’s a story about human life without imperfections?