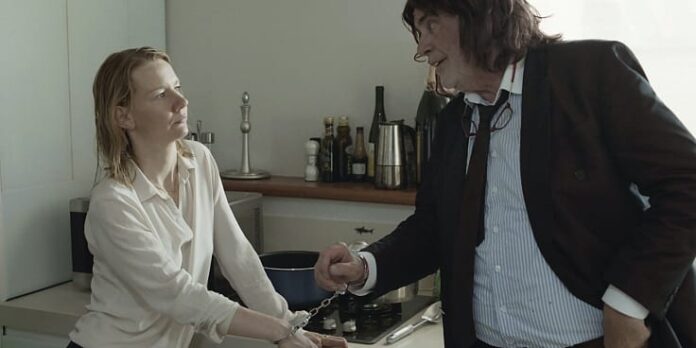 THE STORY – A reluctant woman (Sandra Hüller) must spend time with her estranged father (Peter Simonischek) when he comes for a surprise visit.

“Toni Erdmann” is Germany’s foreign-language submission for this year’s Oscars and for good reason. It is an emotionally touching, unique comedy, unlike anything else you are likely to see all year. Many will be discouraged by the daunting nearly three-hour runtime and even though that amount of time is not needed to tell the story that writer/director Maren Ade sets out to tell, it still manages to achieve its goals of making us laugh and care about the characters all the same. In that regard, “Toni Erdmann” is a joy.

Winfried Conradi (Peter Simonischek) is the divorced father of Ines Conradi (Sandra Huller). After the death of his dog, Winfried decides to visit his daughter unannounced and surprises her with his usual blend of humor and multiple personalities as a means to win her affections and bring joy back into her life. Ines is pretending to be a tough and successful business woman when in reality she is struggling through life. Armed with fake teeth, a bad wig and the means to do almost anything, including donning a fake persona named Toni Erdmann and getting mixed up in Ines’s professional life, Winfried will stop at nothing to make sure he sees his daughter smile again.

“Toni Erdmann” can be quite painful to watch at times. This is not just in terms of its awkward comedy and tension of wondering when Erdmann will get caught in a lie and thus embarrass his daughter, but also in the relationship the two characters share with one another. Many scenes are perpetuated by Sandra Huller’s look of disbelief, embarrassment and at times even contempt as her father inserts himself into every aspect of her life. The two are a total contrast of personalities, both outer and inner. On the outside, Ines is portraying herself as a tough as nails business woman, while on the inside she is sad and lonely. On the outside, Winfried is outgoing, goofy and affectionate. There are, however, hints at darkness underneath his many bewildering personas. The loss of his dog, the loss of his marriage and the fear of the loss of his daughter’s childlike sensibilities all drive Winfried to conjure up these multiple personalities, filled with jokes and humor so that he may bring back a tinge of happiness in Ines’s life. At one point Winfried sees how his “joking around” impacts people’s lives and yet he still manages to impart words of wisdom such as, “Do not lose the humor.” It’s this perseverance and attitude towards life that drives Ines to do the same and embrace her father’s spirit in a party scene towards the end of the film that is completely hysterical and unforgettable.

Without the two leads, Peter Simonischek and Sandra Huller, “Toni Erdmann” would simply not work. The relationship which the two characters share not only feels real in its most complex moments, but also in its most tender ones as well. There is one scene in particular where the two partner up to perform the song “Greatest Love Of All” by Whitney Houston, with Winfried playing the piano and Ines singing the lyrics. Huller is tremendous throughout the film but she really goes for broke here, singing the song with all of her heart and bringing the house down, creating a wonderful moment between her and her father. This is all encapsulated when she sings the line, “learning to love yourself is the greatest love of all” and it is here that we finally realize the change that Ines is experiencing through the relationship with her interfering yet caring father.

“Toni Erdmann” mixes both comedy and drama beautifully and personifies it in its two leading characters. It creates a rewarding filmmaking experience that certainly overstays its welcome by at least a half an hour. However, writer/director Maren Ade is so in control over the tone, pacing, and performances that it’s a miracle that “Toni Erdmann” manages to be as impactful as it is. It’s a blend of everything one could want in a movie, from unforgettable characters to a good sense of humor and life lesson takeaways, “Toni Erdmann” through all of its crazy antics, manages to win our hearts.