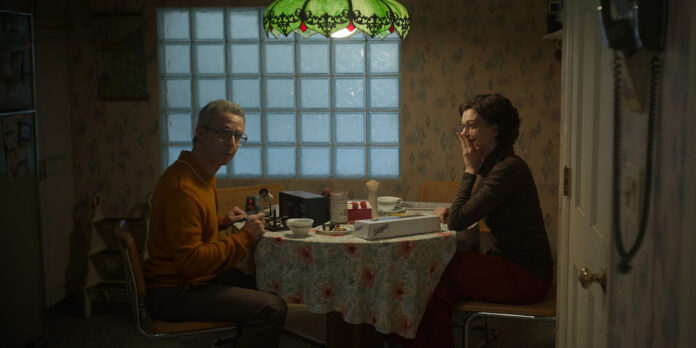 THE STORY – Paul Graff enjoys a peaceful childhood in a New York borough, getting up to no good with Johnny, a classmate ostracised at school for the color of his skin. Paul believes himself to be shielded by his mother, who heads up the parent-teacher association, and by his grandfather, to whom he is close. But one incident sees him sent to a private school, where the board is chaired by Donald Trump’s father. The rampant elitism and bare-faced racism he encounters there will change his world forever.

After pushing himself with the higher budgeted and expansive projects “The Lost City Of Z” and “Ad Astra” (and garnering more critical praise in the process), director James Gray is back with the hotly anticipated “Armageddon Time.” An autobiographical tale from Gray’s childhood set in New York City during the 1980s, this scaled-back drama follows in the footsteps of other recent self-autobiographical reflective pieces, including Kenneth Branagh’s “Belfast” and Lee Isaac Chung’s “Minari.” Considering the success of those films, did Gray’s personal attachment to the story make this one his strongest yet?

Unlike other cinematic works released over the past few years, Gray does not lean into the 1980s from a nostalgic perspective. With projects such as “Stranger Things” and “Wonder Woman 1984,” it has become common to associate the decade with bright colors, puffy hair, and a roaring soundtrack of various hits from the era. In “Armageddon Time,” Gray keeps his color palette of 1980s New York City muted, which is appropriate given the murky political landscape reflected within the film but leaves a lot to be desired stylistically. The primary references from the time actually come from the mentions of politics (yes, including the Trumps), showing the public’s general reaction to Ronald Raegan’s presidential campaign and eventual election. This view of the decade seems to be one that is in line with Gray’s views of his childhood, and it is refreshing to see that shown on the big screen as it presents a unique way to tell the story. However, there are odd moments in which the editing features archival footage and dream sequences, which can be hit or miss as they don’t seem to fit in with the rest of the tone Gray is trying to convey.

“Armageddon Time” brings together a big cast of well-known actors, and they all mostly deliver with the material they are given. After his Best Actor Oscar-winning performance for “The Father,” Anthony Hopkins manages to capture our hearts once again as Paul Graff’s grandfather Aaron and warms up any scene he is in, continuing a streak of winning performances from the 84-year-old actor. Anne Hathaway also delivers a decent performance as Paul’s mother, Esther, continually reminding audiences of how talented and underrated she is. However, it is Jeremy Strong who steals the film as Paul’s father, Irving. This film shows that Gray’s father had a significant impact on him during these formative years, and that influence can be seen in every moment of Strong’s performance. Considering he’s given the most substantial emotional arc near the end of the film and the flashiest moments in the script, it is hard to walk away and not be impressed with his acting range.

While “Armageddon Time” presents an earnest snapshot of Gray’s childhood, the story, unfortunately, does not offer enough context to care about the events that occurred. Aside from Paul’s father, it feels like none of the characters go on an emotional journey or develop their own stories. This is particularly the case with the lead character, Paul (played by Michael Banks Repeta), who is meant to represent Gray. While there are glimpses of change within his character, it is tough to see what kind of journey he went on emotionally during the film’s events or whether the challenging moments he faced made any kind of an impact on him as he got older. His character repeatedly makes the same mistakes, with various situations escalating in tension and drama, but the results have less of an effect throughout. Keeping the audience at such an arm’s length from such a story only serves to render it hollow.

A ton of focus is placed on sharing Gray’s childhood from his perspective, which leaves other more intriguing storylines and characters to be pushed to the side. The filmmaker is interested in talking about issues that impacted the U.S. during his childhood years, especially when it comes to racism. This is highlighted through the dynamic relationship between Paul, and his friend Johnny (Jaylin Webb), which is a fascinating one to watch, and yet any attempt at social or racial commentary feels very surface level. It is extremely uncomfortable to watch how Johnny is treated throughout the film, and the way his storyline ends leaves everything that came before it with a sour taste that is hard to get rid of. Gray also tries to touch upon his views of the creative industries during this time. There are some imaginative sequences involving his passion for art, but there is also no satisfying conclusion to this storyline for him either. Considering that he did go on to have a career in filmmaking, it would have been lovely and insightful to have that topic go beyond the constant repetition of being told not to pursue such a career and actually show how his journey to becoming one could inspire others to follow similar dreams.

“Armageddon Time” does not aim to hit the same emotional beats as the other autobiographical coming of age dramas have. It instead presents a more challenging look at childhood during a tumultuous time politically and socially, which is commendable and will work for some, especially those who also grew up during this time period. While Gray’s sincerity can be felt, the screenplay refuses to focus on expanding the characters and important themes with an ending that is left up to interpretation, making it hard to conclude what he wants the audience to take away from his latest. It’s missteps like this that make what should’ve been a crowning achievement for the talented filmmaker one of his greater disappointments.