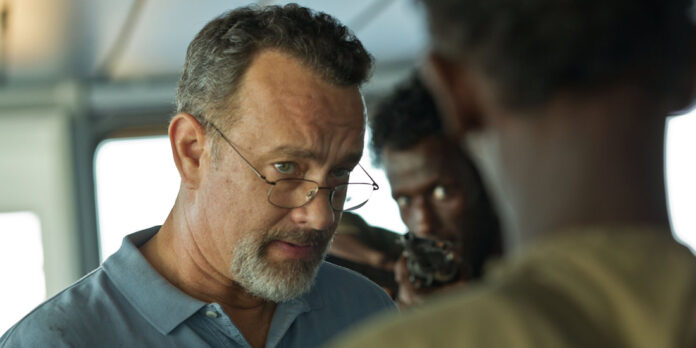 THE STORY – In April 2009, the U.S. containership Maersk Alabama sails toward its destination on a day that seems like any other. Suddenly, Somali pirates race toward the vessel, climb aboard, and take everyone hostage. The captain of the ship, Richard Phillips (Tom Hanks), looks to protect his crew from the hostile invaders and their leader, Muse (Barkhad Abdi). The pirates are after millions of dollars, and Phillips must use his wits to make sure everyone survives and returns home safely.
​
THE CAST – Tom Hanks, Barkhad Abdi, Catherine Keener, Michael Chernus, David Warshofsky & Yul Vazquez

There’s a complicated risk and reward system when it comes to films that are based on real-life events. In one breath, the stamp of “truth” can draw in a wide array of audiences. Those passionate about the subject matter will be intrigued, and novices who want to learn more will use the film as a starting point. Conversely, the stamp of “truth” can open the film up to criticisms regarding the accuracy and the biases of the filmmakers. There’s a fine line between artistic license and Hollywood gloss, between dramatization and misrepresentation. It takes a delicate touch to navigate the harsh waters of the biographical drama, and few directors have braced these waters as confidently as Paul Greengrass.

Greengrass’s career has been dictated and primarily defined by real-life events. He honed his craft as a documentarian and TV dramatist before leaping to feature films with 2002’s “Bloody Sunday.” He was praised for his kinetic take on the 1972 shootings in Northern Ireland and parlayed the success of the film into similarly tense efforts like “United 93” (2006), “22 July” (2019), and the first installment in our 2013 retrospective, “Captain Phillips.” The latter was a critical and commercial success upon its release and remains arguably the best example of Greengrass’s directing talents. Does it still hold up nearly a decade later?

“Captain Phillips” is a retelling of the 2009 Maersk Alabama hijacking, in which Somali pirates took over the ship of the same name. The hijacking and subsequent hostage standoff were widely televised at the time, so audiences with even a passing knowledge of the event know what to expect. Instead of trying to fool them, however, Greengrass embraces the real-life limitations of his story and twists them to his advantage. The film’s opening parallels both the crew and the Somali pirates’ actions before they come into conflict. Neither party knows what lies ahead, but the presentation (and the built-in awareness of the audience) casts a shadow of poetic irony over the proceedings.

The film is mercifully brief on the exposition and wastes little time staging the hijacking that anchors the first act. Greengrass is no stranger when it comes to large-scale action scenes (as his work on the “Bourne” franchise can attest), and he orchestrates a masterful sequence of alternating high-and-low angle shots as the pirates attempt to board the Maersk Alabama. The use of shaky-cam has become commonplace for the director. Still, he continues to show restraint and taste whenever he deigns to give the audience a shaking close-up of the pirates or the slowly unraveling crew. In the hands of someone like Michael Bay, the shaky-cam becomes a crutch to enliven a boring shot. In Greengrass’s hands, it becomes an amplifier for a scene’s pre-existing (and well-established) tension.

The pirates, led by Abduwali Muse (Barkhad Abdi), eventually break through the firewall and take the Maersk Alabama crew hostage. They plan to hold the ship ransom for millions of dollars, but the crew, independent of their captain, Richard Phillips (Tom Hanks), decide to fight back. Things go awry, however, and the pirates wind up taking Phillips hostage in an attempt to guarantee their payday.

Phillips and Muse are at wildly different junctures in life, and the script does a deceptively fine job of highlighting these differences. Phillips is a comfortable skipper; a creature of habit reaching middle age, whereas Muse, is a desperate pirate; a criminal pushed to the end of his rope through impoverished circumstances. The latter is clearly the aggressor early on, but the longer the story wears on, the more obviously formidable Phillips becomes. Muse’s tenacity and unwillingness to back down are gradually matched by Phillips’s loyalty to his crew and his compulsion to protect them. It’s a stalemate of wills, and though never outwardly stated, there seems to be a core understanding between Phillips and Muse. Both men are simply doing what they have to do to survive.

This central dynamic would not be nearly as strong were it not for the stellar performances by Tom Hanks and Barkhad Abdi. Hanks’s reputation as the quintessential everyman had already been solidified by 2013, and yet he manages to find new shades and emotions to play with here. His Phillips is a hero by circumstance, a working stiff who’s fighting off cowardly impulses at every turn. Some of the real-life crewmembers chastised the film for making Phillips too heroic. While that may very well be true, Hanks’s vulnerability ensures that the character never feels invincible. The final scene, in which a rescued Phillips breaks down and cries, is among the finest bits of acting in Hanks’s entire career.

Remarkably, Hanks is matched in conviction by Adbi. The Somali-American actor steals the film from the moment he enters the frame, forging a tragic and terrifying character. There’s an unpredictability to the character that’s largely owed to Abdi’s vulturine body language, which plays in sharp contrast to the skittishness of Phillips. He also shines in brief moments of internalization, particularly during the final act, when the severity of the character’s actions begins to sink in. It’s a remarkably realized performance that was well-deserving of an Oscar nomination.

Greengrass films are not generally singled out for their acting ensembles, but “Captain Phillips” boasts a deceptively strong crop of supporting turns. Michael Chernus, David Warshofsky, and Corey Johnson shine as the resourceful members of Phillips’s crew, while Catherine Keener adds memorability to the otherwise thankless role of Phillips’s wife. Yul Vasquez, a supremely underrated bit player, is also a standout as the commanding officer of the USS Bainbridge. It’s actors like these that elevate standard dramatic fare to the realm of excellence, and it’s something that was sorely lacking in Greengrass’s follow-up, “Jason Bourne” (2016).

Like most films, “Captain Phillips” has its shortcomings. The airtight pacing of the first two acts falters ever so slightly during the third, and much of it has to do with the suddenly limited space of the lifeboat. The actors are still giving it their all, but Greengrass and cinematographer Barry Ackroyd fail to shoot the lifeboat exchanges in a particularly engaging manner. It feels as though we get further away from the characters when we should be getting closer. There’s also the increased emphasis on the US Navy, which makes sense given their role in Phillips’s rescue, but their sudden relevance relinquishes some of the tension that had been building up. These are minor, relatively subjective flaws, but they ultimately keep “Captain Phillips” from the consecrated banner of “perfection.”

2013 was a banner year for Hollywood, with classic releases like “Gravity,” “12 Years a Slave”, and “The Wolf of Wall Street.” “Captain Phillips” may lack the technical innovation, the cultural significance, and the masterful decadence of these titles, respectively. Still, it deserves to be remembered (and celebrated) for its tense direction and magnetic performances. Time has been kind to this meat-and-potatoes film, for quality never goes out of style.