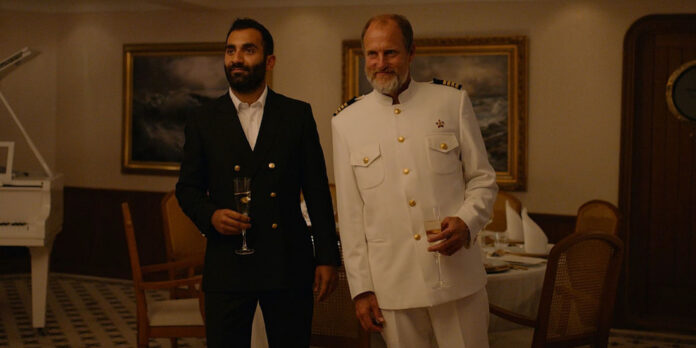 THE STORY – Models Carl and Yaya are navigating the world of fashion while exploring the boundaries of their relationship. The couple is invited for a luxury cruise with a rogues’ gallery of super-rich passengers, a Russian oligarch, British arms dealers and an idiosyncratic, alcoholic, Marx-quoting captain. All may seem Instagrammable at first, but a storm is brewing.

Five years after winning the Palme d’Or with his previous film “The Square,” Ruben Östlund is back and unafraid to make headlines once again. His newest endeavor, “Triangle Of Sadness,” had audiences giving their applause not just at the end of the film but throughout for its completely outrageous but brilliantly scathing takedown of the wealthy and beautiful. Spending nearly two-and-a-half hours with the rich may not initially sound like the most fun experience. However, Östlund’s black comedy proves to be exactly that as it’s an uproarious crowd-pleaser that gives the audience a chance to see the most prosperous and preposterous knocked down to their lowest levels imaginable.

The film introduces the audience to Carl (Harris Dickinson) through an audition to model for a high-end brand. This sequence not only explains the film’s title – the triangle of sadness being the frown lines between your eyebrows – but it also explains the lack of equality in the modeling industry. It is said that women are paid up to three times as much as men to model, and this note provides a strong transition into Part One, which is titled Yaya and Carl. Carl’s girlfriend Yaya (Charlbi Dean) acknowledges that she earns more money than her boyfriend as a female model, yet causes an argument between the two in the middle of a public restaurant when trying to make him pay for their meals. This particular sequence creates a specific tension and conflict between the two, and yet we are not led to support either side of the conflict as Östlund never forces explicit explanations on his audience for his characters or the situations they find themselves in. It’s a biting look at the rich’s lifestyle, with the argument focusing on money rather than their emotions. It is hard to feel pity for either of these privileged and pompous models having a full-blown quarrel over what is, for them, a small amount of cash. Östlund immediately draws a sharp divide between the audience and his characters, making it easier for us to laugh at their expense down the line.

Part One is only the tip of the iceberg, though, as the film’s best scenes come with Part Two: The Yacht. As influencers, Yaya and Carl are invited onto a luxurious cruise ship free of charge, providing that they document their experience to their legions of followers on social media. It may seem plain sailing, but chief stewardess Paula (Vicki Berlin) is struggling behind the scenes to keep everything on the ship running. With the captain (Woody Harrelson) refusing to leave his room, guests demanding that the crew go for a swim, and a heavy storm coming up, Paula tries her best to make sure everyone on the ship is ready to give the guests a good time, but of course, the stage is set by Östlund for something more wild to occur when so many outlandish personalities come together.

It is not until the captain’s dinner sequence that everything starts to go downhill for the guests on the ship in a manner that must be seen to be believed. Suffice to say, Östlund takes his characters and places them in the worst situation possible, all for the sake of our pleasure. One set piece, in particular, will likely go down as one of, if not the most memorable of the year and should be avoided for spoilers at all costs to preserve the shock, horror, and laughter Östlund has in store. If you take joy in seeing the rich and powerful suffer while the drunk captain of the ship blabbers on about Karl Marx and Ronald Reagan to an oligarch (Zlatko Buric), with loads of bodily fluids involved, this sequence may just be for you. It’s ostentatious, intelligent, and one of the most amusing sequences to emerge from a comedy of this kind in quite some time. And this is just one of many, as Östlund has several surprises up his sleeve in this expansive dark comedy.

One of the main reasons why “Triangle Of Sadness” works as well as it does is because Östlund has complete command over the tone of his latest through some painfully funny and committed performances from his cast. Harris Dickinson possesses the perfect demeanor to play a male model and yet can also lean into the over-the-top humor the screenplay gives to him. Vicki Berlin has a distinctive energy about her that fits the annoyingly cheerful chief stewardess and is able to use that energy to show the frantic panic that her character faces every waking moment she’s trying to hide that from the guests. Woody Harrelson may have a more minor role than you might expect, but his casting as the captain of this unforgettable yacht is genius. He is an absolute scene-stealer, and his line delivery alongside Zlatko Buric produces some of the film’s biggest laughs. While his role is not significant enough to attract any kind of awards attention, it’s another win for the versatile actor that will undoubtedly go down as one of the more indelible roles of his career.

Part Three of “Triangle Of Sadness” should be best discussed as vaguely as possible. However, what is particularly compelling about this final section is how the cruise ship’s toilet manager Antonia (Dolly De Leon), is able to take control of the spiraling out of control circumstances, giving the audience someone they can perhaps connect with, seeing as how up until this point the film is filled with the kind of despicable human beings we’d never want to associate with. The social hierarchy changes drastically within the final act, as the humor once again pivots towards the conflict between Carl and Yaya. What is perhaps most astonishing about “Triangle Of Sadness” is how Östlund chooses to end his latest. He boldly leaves it up to the audience to decide what occurs at the end. Some may be confounded by Östlund’s choice here since the characters’ actions lead us to places you would never expect this movie to end up, but with no definitive statement on what its intentions are in the final moments. For a film that made its themes and screenplay so blatantly obvious early on and has led us on such a whacky journey for nearly two and a half hours, it feels abnormal to have to decipher Östlund’s ultimate message in the film’s final moments. While some may not find any fault with this, such a move may prove to be divisive for others.

What first appears to be a look at the rich and luxurious lifestyle of being a model and an influencer, “Triangle Of Sadness” takes Östlund’s satirical formula to another level in a film that lacks subtlety but in the best way possible. While his latest will not be everyone’s cup of tea the same way something as acclaimed as “Force Majeure” was, it is hard to ignore the reactions “Triangle Of Sadness” will elicit from audiences, whether it’s laughter, disgust, shock, or wonder from the witty dialogue and over-the-top humor. It’s a non-stop, laugh-out-loud, savage ride that pulls no punches and should be seen as blindly as you can with the biggest crowd possible to best experience its brilliance.