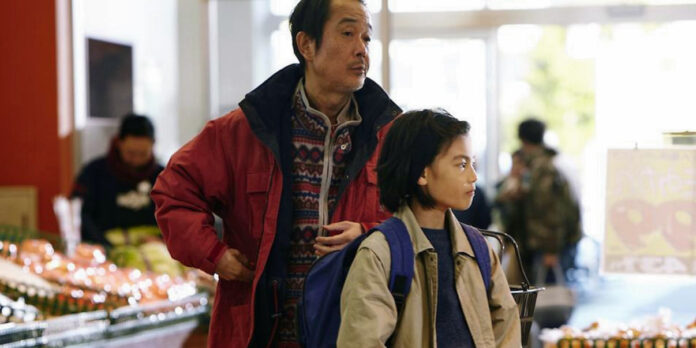 THE STORY – From the director of Still Walking, Like Father, Like Son and Nobody Knows. A film by Kore-Eda Hirokazu.
​​
THE CAST – Lily Franky, Sakura Ando, Mayu Matsuoka, Kairi Jō, Miyu Sasaki & Kirin Kiki

​​​​​​​Known for his humanist family dramas (“After The Storm,” “Still Walking” & “Like, Father Like Son”) director Hirokazu Kore-eda returns yet again to the questions that arguably guide his recent body of work– what does it mean to belong in a family? What constitutes a family, anyway? Winner of the Palme d’Or at this years Cannes Film Festival, “Shoplifters” is perhaps Kore-eda’s most difficult appraisal of these issues, pitting empathy against moral ambiguity and privileging multiple experiences from an ensemble of flawed, complex characters.

Osamu Shibata (Lily Franky) and his wife Nobuya (Sakura Ando in one of the most subtle, but powerful dramatic performances of the year) live in poverty somewhere in Tokyo, along with their son, Shota (Kairi Jō), grandmother, Hatsue (the late Kirin Kiki), and teen daughter, Aki (Mayu Matsuoka). Osamu supposedly works as a day laborer, Nobuya as a cleaning lady, Aki as a sex worker at a peep show ala Paris, Texas– but all members of the Shibata clan, including the young Shota, base their livelihoods primarily on shoplifting. In the opening scene of the film, a playful, jazzy, father-son operation resulting in a backpack full of stolen groceries, depicts the extent to which shoplifting has come to define the family, who have devised an entire series of hand signals to indicate the objects they intend to swipe. Coming home from an afternoon of ragtag maneuverings, Osamu and Shota find a five-year-old girl alone and shivering out on the street, and decide to bring her home to warm up, and for some noodles and croquettes. It’s soon evident that the girl, Yuri (Miya Sasaki), is subject to abuse in her household, which persuades Osamu and Nobuya to keep her as their own.

Unorthodox as it may be, the couple are no strangers to unofficial adoption, as it becomes clear that none of the family members are related by blood, but rather, held together by an emotional bond rooted in shared struggle and need. Influenced by reports of the poverty resulting from the 2009 Japanese Recession, “Shoplifters” is a portrait of how a community is formed by those who have been stripped of the privileges that belong to mainstream society. That the Shibatu’s rely on shoplifting as their main source of income, and go so far as to shoplift a new child to call their own, reframes the typically frowned upon action as something potentially dignifying– emblematic of an unabashed striving to exist and seek happiness in a world that is otherwise indifferent, if not hostile. Yet Kore-eda inflects these efforts with the melancholy reality of social convention and bureaucracy that prevents the hopes and desires of our family of shoplifters from actualizing.

Though the main narrative thread latches on to the reasons, and later consequences, of Yuri’s illicit integration into the Shibatu family, “Shoplifters” veers into observational vignettes that probe deeper into the unique circumstances of each family member. The effect is a more egalitarian portrait of the family as a whole, which serves to vindicate not a singular, exceptional reasoning for this normatively “illegitimate” way of life, but the spirit of an entire people. Because of the film’s symbolic scope, and the resulting attention it gives to several characters, Kore-eda forgoes some of the sentimental resonance so easily built-up in his single-protagonist reliant films of recent years, which occasionally makes his usual melodramatic touches feel contrived. But perhaps Kore-eda, so keen on infusing his signature emotional style with a new socially-conscious purpose, is here less interested in crafting another relatable family fable than he is in planting within us an enduring, and more intellectual form of empathy.