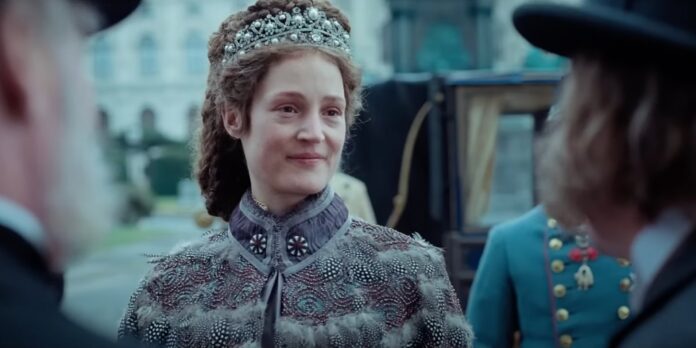 THE STORY – Empress Elisabeth of Austria is known for her beauty and fashion trends. But in 1877, she celebrates her 40th birthday and must fight to maintain her public image. With a future of only ceremonial duties in front of her, she rebels against her public image and comes up with a plan to protect her legacy.
​
THE CAST – Vicky Krieps, Florian Teichtmeister, Jeanne Werner, Alma Hasan, Finnegan & Colin Morgan

In some ways, making a film about Empress Elisabeth of Austria and Hungary – or Sissi as she was known – feels sort of like making a movie about Marilyn Monroe. During her life, every aspect of her appearance and behavior was heavily scrutinized by the people, the press, and her fellow royals. Her beauty was famed far and wide, and her weight was the subject of tabloid articles. In the 1950s, a series of German films starring Romy Schneider further immortalized Sissi in a very romantic depiction of her troubled life.

It’s easy to see how “Corsage,” the new biopic of the nineteenth-century monarch, could have gone wrong and felt like further exploitation of a much-mistreated woman. But Marie Kreutzer crafted a film that is most interested in examining the insane pressures put on Sissi and how upkeeping her image damaged her mental health. The co-production between Austria, Germany, Luxembourg, and France premiered at Cannes in May and is now playing at TIFF.

The film begins in Vienna in December 1877, just before Sissi’s fortieth birthday. The ruler married Franz Joseph at the age of sixteen, ascending to the throne and becoming Empress of Austria and Queen of Hungary in 1854. She would continue to hold the title until her assassination in 1898. The film provides little context for any of this but instead dives right in. It shows Sissi (Vicky Krieps) timing how long she can hold her breath underwater before her servants determinately tight-lace her corset and measure her waist (This is one of the few times in a period drama when tightlacing is entirely appropriate).

When she goes to a royal event, she’s immediately met with the discussion of her weight and criticism of how much time she spends in Hungary instead of in Austria’s capital. She collapses on purpose to get out of the event, preferring to spend time with her beloved cousin Ludwig (Manuel Ruby) and smoke cigarettes. In between constantly being weighed, she spends her time horseback riding and doing gymnastics, seemingly desperate in search of something to fulfill her in a way that royal life and motherhood do not.

When Sissi goes to hand out fancy sweets at a mental asylum, she encounters a woman who is locked in a cage, screaming and thrashing. It’s clear that she understands as we do that if it were not for her royal status, it could be her in the asylum alongside this woman. The whole film is filled with a sense of melancholy, a yearning for something that will never come. Krieps brilliantly infuses Sissi with an air of detachment, but something is clearly simmering under the surface.

Franz Joseph (Florian Teichtmeister) and Sissi fight over her restlessness and how to raise their children. He criticizes her parenting of young Valerie (Rosa Hajjaj), implying that she is to blame for the death of their earlier child Sophie. Eldest son Rudolf (Aaron Friesz) wants to connect with his mother, even asking to accompany her on her trip to England, but while there, he warns her about the gossip about her lovers, driving a wedge between mother and son.

Sissi isn’t subtle about her flirtation with her riding instructor George “Bay” Middleton (a darkly charming Colin Morgan). But it becomes clear that her long list of lovers are influenced by her need for praise of her beauty – if only the film had delved more into how this obsession with her beauty had been created in her teen years by those around her. Indeed, the film does an excellent job of keeping the audience aware of the timeline but fails to provide a lot of the context needed to make its points fully click. Characters aren’t given much introduction, and the line between fiction and truth is blurred in a potentially confusing way for a figure that most of its audience won’t know much about.

In many ways, “Corsage” feels like a combination of “Spencer” and “Marie Antoinette.” It has the fictionalized psychoanalysis of the former and the opulent costume design (by Monica Buttinger), and the modern soundtrack of the latter. However, it fails to reach the heights of either of those films as it lacks nuance in the statements it’s making about Sissi’s life, the strict expectations of her, and of women in the spotlight. “Corsage” makes us feel the constriction around its heroine but never fully delves into why it’s there.