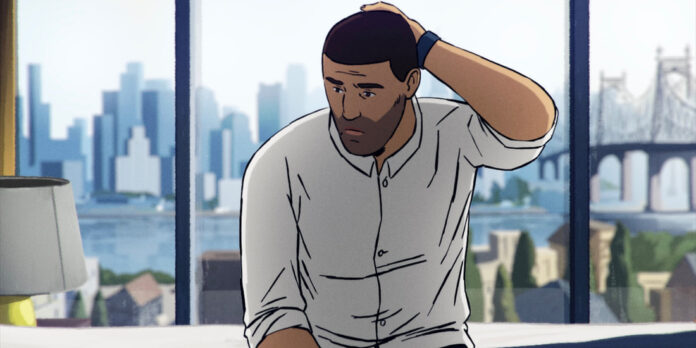 THE STORY – An Afghan refugee agrees to tell a remarkable personal narrative of persecution and escape on the condition that his identity not be revealed. As a means of fulfilling that wish, his filmmaker friend uses striking animation to not only protect this young man but also enhance his tale, bending time and memory to recount a visceral, poetic, and death-defying journey dictated by deception, loneliness, and a relentless will to survive.
​
THE CAST – Amin Nawabi & Jonas Poher Rasmussen

​​​​​​We’ve seen animated documentaries before, such as “Waltz With Bashir” and “Tower.” So while “Flee” may not break any new ground or be considered a revolution for the art form, there are still many contributing factors that help this particular film and personal story stand out. The emotional defenses of the film’s main subject remain exposed yet also somewhat impenetrable, as he’s tormented from a lifetime of PTSD that has made him not only distrusting of others but also fearful for his life and the lives of those whom he loves. This is a refugee story like so many others that have been untold but also unlike so many others in its execution.

Backed by star producers Riz Ahmed (“Sound of Metal“) and Nikolaj Coster-Waldau (“Game of Thrones“) and recently acquired by NEON out of the Sundance Film Festival, “Flee” tells the life story of Afghan refugee, Amin Nawabi (a pseudonym to protect his real identity). Amin has agreed to disclose the events of his life for the first time to his friend and filmmaker, Jonas Poher Rasmussen. Starting in Kabul in 1984 with his family and ending in Copenhagen, Denmark in the present day, with his male fiance and his family’s fate still a mystery to him, Amin’s story takes many twists and turns. Sometimes nightmarish, sometimes beautiful, but always inspiring, his story is a testament to the human condition to survive at all personal costs.

Director Jonas Poher Rasmussen has crafted a mesmerizing feat of storytelling that should be regarded as one of 2021’s remarkable achievements. The decision to have his documentary told as an animated film is not a stylistic choice born out of creative desire but out of sheer necessity to protect the identity of the film’s main subject, who is risking his asylum should his true identity be revealed. Rasmussen makes the most of it, allowing the animation to wash over so that we may experience Amin’s fears, anxieties, joys and desires in a subconscious manner that you couldn’t achieve with live-action filmmaking. The result is one of the most revealing, richly drawn (literally and figuratively) and staggering pieces of art you are likely to see this year.

We empathize with Amin’s life story as it starts from the time he’s a child to the present day, covering not just his refugee experience but also his quest for his own sexual identity in a part of the world where such a thing can be punishable by death. Amin’s traumatic experiences are backed by a gorgeous, yet gloomy, violin-led score from composer Uno Helmersson, while an ’80s pop soundtrack supplements his brighter moments. This is never better utilized than in a scene when Amin enjoys a night out at a gay nightclub for the first time ever, finally at peace with his sexual identity. Creating such a duality in the music is symbolic of who Amin is as a person. Someone who is exposing who he is, to a certain extent, to the world for the first time while also still needing to protect himself after a lifetime of suffering.

“Flee” is an impressive memory poem that not only gives us an insight into the Afghan refugee experience but also presents to us an intriguing character study, one that we may not fully ever know but we can seek to understand through his own personal experiences. Jonas Poher Rasmussen’s artistry and trust, which he has built with Amin over the years, is thoroughly on display, creating his most sprawling, gorgeous and extraordinary film. It’s a breathtaking cinematic experience you are unlikely to forget any time soon.