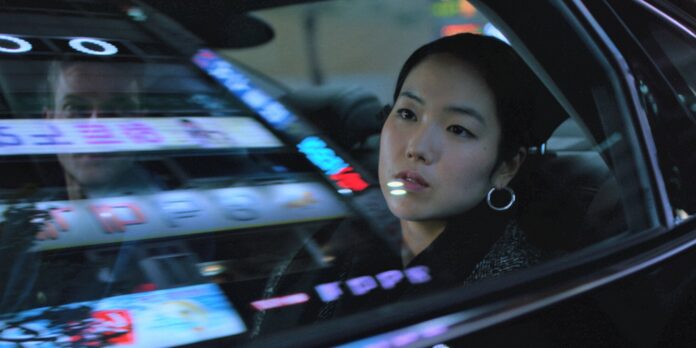 THE STORY – A 25-year-old French woman returns to South Korea, where she was born, for the very first time. She decides to look for her biological parents, but her journey takes a surprising turn.

There’s a unique thrill that can be discovered in the midst of watching the personal journey of a complex person. It’s a facet of cinema that is particularly potent. Seeing the world through a perspective that may be unlike anything that one is immediately familiar with, yet has the possibility to connect to a powerful universality. Draping this aspect against the backdrop of the international stage opens up this empathetic assessment, even more, allowing for a brilliant piece on the nature of humanity. “Return to Seoul” looks to dive head-first into the nuances that form when an aimless life is desperately trying to find meaning in every connection, and it is an engrossing portrait to witness.

Freddie (Park Ji-Min) has arrived in Korea in an effort to discover more about her own history. Adopted by French parents as a child, she has returned to her country of origin to learn more about her biological family. Along the way, she creates a friendly bond with a stranger, Tena (Guka Han), before eventually meeting with her father (Oh Kwang-rok). He has a new family but is still filled with regret and overly apologetic to a resentful Freddie. What began as merely a two-week impromptu visit evolves into a much longer trek. She is continually brought back to the country over the course of many years, and each new encounter unfolds an undiscovered layer concerning her complicated past. Her multiple pilgrimages are persistent in revealing a deeper understanding.

Davy Chou manages to craft a tender examination of the nature of displaced identity, achieved through a quiet yet profound intimacy that finely textures this world. The canvas of these strained relationships often exacerbated through the prism of language, is a rich commentary that is explored rather masterfully. The analysis of the nature of guilt and how it drives all these characters to consequential decisions feels both grandiose and authentic. These are individuals who are constantly choosing the freedom perceived in the moment, unashamed until those consequences are eventually met. There is a nuanced landscape being created, and Chou mines this territory with a subdued yet compelling catharsis.

There are moments, however, when one can feel the strain of such measured pacing. While it is often employed to ruminate in the spaces these individuals inhabit and give them a more layered inspection, it can occasionally turn languid instead. There is also an abrupt shift within the narrative as it moves forward quickly in time and abandons the more focused perspective at the start. While it is thematically purposeful, one cannot help but feel the disrupted rhythm of the storytelling that is never quite recaptured in the second half. There are plenty of insightful descriptions of these intricate characters, but the shift in momentum is noticeable and deflates some of the more captivating notes that came before.

Park is a fantastic anchor for this piece, as her performance is able to display a wide range of emotions in just a few subtle glances. She captures the conflicts at her core that never give way to hollow histrionics. The search for answers to indecipherable questions is beautifully rendered in every scene. Even when the film loses some steam, she remains an engaging presence. The surrounding ensemble is well-suited too, and she shares a tense yet alluring chemistry with Han. Oh is also devastating as a tragic figure haunted by the mistakes of his past. His portrayal is incredibly sad yet grounded, making the erratic behavior all the more frustrating and understandable. It’s a heavily shaded role that he makes the most out of, and it’s hard not to be moved by this difficult persona.

“Return to Seoul” certainly has times when one may be restless with the deliberate pace of its revelations. It is particularly felt in a weaker second half that loses much of the concentrated detail and begins to meander. However, even then, it is consistently attuned to the odyssey being studied, and its themes are plentiful. The craft is simple yet elegant in the scrutiny of this character study, and the performances are truly a joyful discovery that aids the film in an incredible manner. There is tragedy and celebration at the heart of this story, and it is a pleasure to see every new turn unearth a novel dissection of the arduous emotional states one traverses in search of foundational individuality.

<b>THE GOOD - </b>The film is a rich examination of the complicated nature of identity, captured through effective intimacy and complex emotional states. The thematic commentary is captivating, and the performances are marvelous, particularly from Park Ji-Min and Oh Kwang-rok.<br><br> <b>THE BAD - </b>The second half loses a lot of momentum, as the abrupt shift in the narrative doesn't have the same focus. The measured pacing becomes more languid and less compelling.<br><br> <b>THE OSCAR PROSPECTS - </b><a href="/oscar-predictions-best-international-feature/">Best International Feature</a><br><br> <b>THE FINAL SCORE - </b>8/10<br><br>"RETURN TO SEOUL"