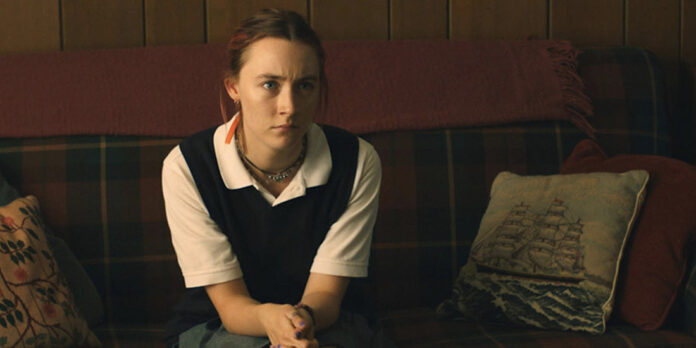 THE STORY – Marion McPherson, a California nurse, works tirelessly to keep her family afloat after her husband loses his job. She also maintains a turbulent bond with a teenage daughter who is just like her — loving, strong-willed and deeply opinionated.

​There are some films that when they come along, you can tell that the writing does not feel manufactured. You can tell it is being written from the heart. And when the actors involved are all delivering humanistic performances that not only transport you to the time and place in which the film is being written but also making you laugh and cry, you know that the film is working its magic over you. And that is the magic of “Lady Bird,” Greta Gerwig’s directorial debut. It is practically impossible to dislike.

Taking place in Sacramento California in 2002, Christine McPherson (Saoirse Ronan) or “Lady Bird” as she likes to be called, is a young seventeen-year-old girl attending Catholic High School, who has dreams of moving as far away from home as she as she applies to various colleges. The problem is that she doesn’t necessarily have the best grades, her father (Tracy Letts) has just lost his job and her mother (Laurie Metcalf) is reluctant to let her go away to college in the first place. Rebellious, awkward and trying to balance all of that out with her love life and auditions for the high school drama play, Christine spends her last year in high school trying to figure out what kind of a person she wants to be.

We have seen Saoirse Ronan mature on screen over the years since 2007 when she flew onto most of our radars with her Oscar-nominated work for “Atonement.” She astounded us once again a few years ago with her also Oscar-nominated work in “Brooklyn.” Hitting familiar beats in terms of the “coming of age” story but with a totally different character, Ronan surprises us yet again with her incredible range, vulnerability, believability, and maturity. She is a phenomenal actress who has an uncanny ability to make us care about the characters she is portraying, flaws and all.

However, despite the work of Ronan, “Lady Bird” is a film about mothers and daughters and the mother is played by industry veteran Laurie Metcalf. If there is any justice in this world, Metcalf will find herself with an Oscar nomination for her emotional and credible work as an overbearing mother, who does not necessarily understand her daughter but is trying her best to love her regardless. She is balanced out by Tracy Letts who plays Christine’s warm and affectionate father. Together, the two create a married couple with a family and home that feels real and lived in.

“Lady Bird” has all of the usual tropes found within the coming of age genre. There is teenage angst, confusion, and exploration of sexuality, in this case with two different boyfriends played by Lucas Hedges (“Manchester By The Sea“) and Timothee Chalamet (“Call Me By Your Name“). Both young men are giving radically different performances than what we typically are used to from them and that leads to a theme a which I found most endearing about “Lady Bird” and that is the exploration of expectations versus reality. Christine has expectations of what her sex life will be like, what it means to fit in, what it means to live her life. Her mother has expectations for her own life as well and for the future of her daughter. The film finds its most brilliant moments when these characters clash with the realities of the real world, sometimes influenced by each other’s own decisions.

Everyone is suffering their own hardships. Everyone has their own desires. And everyone has their own successes and failures in life. Greta Gerwig set off to write a story about one young woman and her family’s life while inserting pieces of her own personal life in there as well. That level of care and attention to detail is what makes “Lady Bird” feel special against the other countless films within this genre. Her first directorial effort is a breezy one with little nuances which help it to come alive. Call it nostalgia. Maybe I, myself found a lot to relate to in this on a personal level but tt also helps that it is written with incredible quick-witted and dry humor that lands perfectly. It has actors who are up to the task to bring the characters that Gerwig wrote on the page to life. And it contains enough callbacks and genuine moments to the time when we were all young, scared, confused to make us all, in the end, feel right at home.