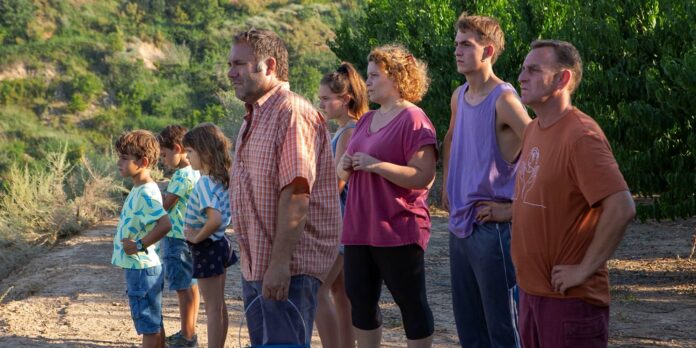 THE STORY – For generations, the Solé family has made a living from the summer harvest of their peach orchard in the Catalan town of Alcarrás. However, after the death of the owner of the property, his heir wants to sell the land.

Named for the small town in Catalonia, Spain, “Alcarràs” is as much about the place as it is about the people. It’s a gorgeous location, full of lush hills and sun-kissed trees. The town feels a bit like a place out of time, with family looking to keep it that way. Director Carla Simón filled the cast with non-actors from around the town to portray the Solé family, building an authentic milieu for the picture. Aiming for naturalism, Simón’s “Alcarràs” has mixed results, primarily due to its unfocused narrative that prioritizes lovely moments over an engaging plot. But still, the beautiful moments are numerous.

Opening on a group of children playing inside a junky old car, one might mistake “Alcarràs” initially for a period piece. The children play pretend in a grand adventure of danger and intrigue until they’re unceremoniously interrupted by a crane needing to remove and destroy the car. While the film may be set in the present day, the Solé family seems somewhere out of time, living a quiet, contented life in their peach orchard. It’s contented until the orchard is sold from underneath them to make room for a more profitable solar panel array. The family has lived and worked for generations in the peach orchard and now must face one more season and an uncertain future.

Three generations of Solès still live on the farm, and much of the film is spent simply watching them be. They live and work and play. They fight and cause trouble. They have big family dinners and argue over who will open the bottle of wine. Simón’s gamble of using all non-actors pays off, especially with the children. The familial atmosphere is tangible and genuinely engaging. While the adults feel the immense pressure of the orchard’s last season, the children don’t realize that much has changed. Some of the teenagers, Mariona (Xènia Roset) and Roger (Albert Bosch) are caught in this in-between, feeling the freedom of their youth but witnessing the pain their parents are dealing with and the fights that result because of it. Quimet (Jordi Pujol Dolcet) is the family member most in charge of the orchard and has the most challenging time coming to terms with the future plans.

While the familial moments are the most enjoyable, a lack of focus on the story is often frustrating. Simòn seems more interested in simply capturing moments rather than telling their story. With a lack of structure, it’s hard to invest in the family, even if it’s nice to spend time observing them. The world is lived in and fleshed out in a masterful, memorable way, allowing us to float in and out of the family’s lives, but rarely brings compelling ideas to the table that further their story. When Simòn does choose to put the plot in the driver’s seat, it’s mainly through Quimet’s eyes. He oscillates between anger, picking fights with his in-laws as they install the solar panels or with his wife, or being productive in other ways, like protesting the unfair prices of produce. Sometimes he works as if nothing’s changing, pushing himself harder and harder as if that could change the outcome for the land.

Despite the lack of structure, “Alcarràs” thrives on Simòn’s ability to craft an environment, a feeling, especially from kids’ perspective. The film captures their freedom and joy in a lovely way. It’s also able to see the subtle ways they discover their world is changing. Having a seemingly idyllic existence interrupted by forces outside of your control is a compelling, pervasive idea. Simòn taps into that fear well, even if she’s more successful at observing people than telling a compelling story.

<b>THE GOOD - </b>A charming slice-of-life portrait of a family desperately clinging to their way of life. The non-actors all hold their ground well, giving us glimpses of joy, melancholy, and sadness.<br><br> <b>THE BAD - </b>It's an experience more than a story, making any investment in the plot a little elusive with little structure, especially with its two-hour runtime.<br><br> <b>THE OSCAR PROSPECTS - </b><a href="/oscar-predictions-best-international-feature/">Best International Feature Film</a><br><br> <b>THE FINAL SCORE - </b>6/10<br><br>"ALCARRÀS"