“MANCHESTER BY THE SEA” 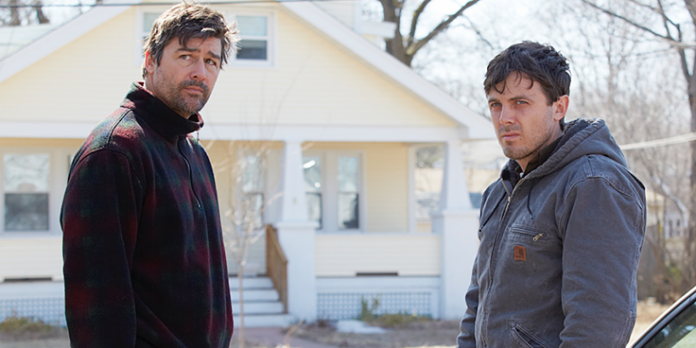 THE STORY – After the death of his older brother Joe, Lee Chandler (Casey Affleck) is shocked that Joe has made him sole guardian of his teenage nephew Patrick. Taking leave of his job as a janitor in Boston, Lee reluctantly returns to Manchester-by-the-Sea, the fishing village where his working-class family has lived for generations. There, he is forced to deal with a past that separated him from his wife, Randi (Michelle Williams), and the community where he was born and raised.

Writer/Director Kenneth Lonergan has a knack for crafting devastatingly intimate stories. He adds to his ever growing list of films with “Manchester By The Sea” and it may be his best effort yet. Boosted by career-best work from Casey Affleck, a heartbreaking performance from Michelle Williams and a breakout turn from Lucas Hedges, “Manchester By The Sea” takes its time while it carefully sets up its setting and its people before it punches you in the gut. It’s a film filled with sadness, laughter and a semblance of hope which touches us deep within our hearts in profound ways.​

Lee Chandler (Casey Affleck) lives a secluded life in Boston as a low-level janitor looking after multiple buildings and coasting through life. One day he receives the news that his older brother Joe (Kyle Chandler) has passed away and that Joe’s son Patrick (Lucas Hedges) is now to be looked after in the care of Lee. However, Lee is not so willing to leave his life in Boston and return back to his hometown of Manchester where his tragic past continues to haunt him, including an old marriage to his ex-wife Randi (Michelle Williams). In the aftermath of his brother’s death, Lee must make a decision as to what to do about his nephew and confront his own internal pain which originates back before his brother’s passing.

Casey Affleck has always been a dependable actor but his acting reaches new levels here. He is a broken man who is silently walking through life hoping to just wither away. His performance is complex and internal with a few moments of raging outbursts scattered throughout. It might simply be his best performance yet. He is backed by two outstanding supporting performances from Michelle Williams and Lucas Hedges. Williams makes the most of her limited screen time in a performance that conveys a lifetime of agony. She has two big dramatic moments in the film. One which is shocking in its devastation and terror while the other is heartbreaking in its emotional catharsis. Her time may be limited but her presence lingers on in your memory long after the film has ended. And Lucas Hedges, who is still a relatively young actor, holds his own against Casey Affleck and also gives a layered performance that feels all too real.

The performances and the patience of the film stems from Kenneth Lonergan, who does not rely on flashy direction to convey his film’s message. His control over the performances and the realism with which he injects into his writing ensures that many will walk away from “Manchester By The Sea” claiming that they just encountered the most human film of the year. That connection comes from the film’s theme of grief and how it touches us all in deeply different ways. Lonergan is smart enough to navigate through this depressing but all too real theme with control and bits of light humor which keeps the film from getting too dark. My only gripe with the film is how the film’s editing chooses to sprinkle the flashbacks throughout the film. There are far too many times where it is jarring and its irregularity takes you out of the film, thus breaking the emotional momentum that Lonergan is constantly building.

“Manchester By The Sea” will mean different things to different people. it touches upon a universal theme, one which we all must deal with in our lives: grief. It touches all of us just as it touches all of the characters in Kenneth Lonergan’s beautiful film. Casey Affleck gives one of the best performances of the year as a guy who’s internal struggle is overwhelming while the supporting cast round out the film with equally brilliant performances. Lonergan gets so much right with his film that with only three directed films under his belt, I think the time has come to consider him one of our most expert directors at navigating the human condition. “Manchester By The Sea” may not be perfect, but its one of the year’s best.