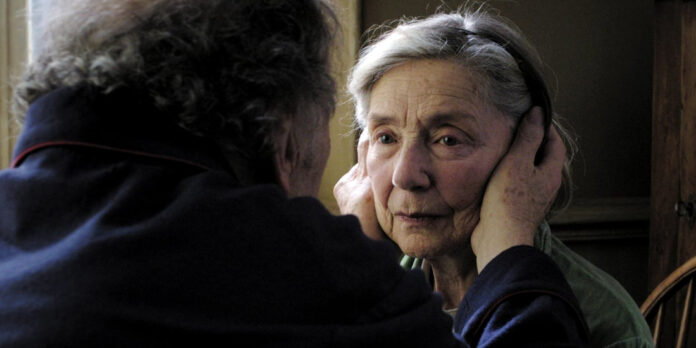 THE STORY – Retired music teachers Georges (Jean-Louis Trintignant) and Anne (Emmanuelle Riva) have spent their lives devoted to their careers and to each other. Their relationship faces its greatest challenge when Anne suffers a debilitating stroke. Though Georges himself suffers from the aches and infirmities of old age, he bravely ignores his own discomfort to take care of his wife, and is determined to keep his promise to her that she never go back to the hospital.

​​​Austrian director Michael Haneke is no stranger to brutality. Gaining international notoriety with his controversial home-invasion flick “Funny Games,” changing the Cannes awards game with his sadomasochistic romantic drama “The Piano Teacher,” and shocking audiences with his stalker-thriller “Caché,” Haneke’s body of work has typically presented us with regular people faced with exceptional, unfamiliar circumstances. That is why his film “Amour,” which won the Palme d’Or at Cannes in 2012, is perhaps his most brutal film to date. While featuring all the typical elements of a Haneke feature: a stable camera, unflinching storytelling, and grounded performances, it uses these unwavering techniques to chillingly recount eerily familiar subject matter, making the experience both terrifyingly real and refreshingly honest.

The film follows a Parisian octogenarian couple, Georges and Anne, played by Jean-Louis Trintignant and Emmanuelle Riva, respectively. Their comfortable, upper-class life begins to disintegrate in front of their eyes after Anne suffers a stroke and complications from brain surgery. Determined to keep his promise of not sending Anne to a senior living facility, Georges does all he can to care for the love of his life as the burden of responsibility grows heavier and heavier.

According to Haneke, “Amour” was inspired by the life and eventual suicide of his aunt, who helped raise him after dealing with years of debilitating rheumatism. Previously, Haneke’s most well-known works have positioned his audience as just that, witnesses watching the action take place in front of us as if through a glass enclosure. “Amour,” on the other hand, submerges us directly in the action, locking us in the stuffy apartment with Anne and Georges, forcing us to see Anne’s health slowly and achingly deplete as our frustration grows with Georges’. Haneke’s frames linger for minutes at a time, unflinching and at times claustrophobic, unwilling to ease our discomfort or distract us with even a slight camera movement.

In such an intimate space, the film is reliant on the perfect casting of its two leads. Riva and Trintignant had made their marks on the cinematic landscape decades prior during the French New Wave of the late 1950s and 1960s. Aside from “Amour,” Riva is best known for her leading role (also her first-ever film performance) in the Alan Renais directed “Hiroshima Mon Amour.” Trintignant’s much more numerous film appearances saw him work with such directors as Roger Vadim, Abel Gance, Claude Lelouch, Eric Rohmer, and Bernardo Bertolucci (to name a few). Both, coincidentally, were cast in a respective third of Krzystof Kieslowski’s “Three Colours” trilogy in the early 1990s (“Blue” for Riva and “Red” for Trintignant). Both actors were deservedly rewarded internationally for their performances in “Amour,” both winning Césars and European Film Awards, while Riva received a Best Actress nomination at the Oscars. Never going over the top or begging for sympathy, the pair’s grounded performances are essential for the film’s success. We believe instantly that these two have been madly in love for decades and will go to the ends of the Earth for one another. Between the two, there is palpable tenderness without a hint of sentimentality. After the end of the first act, Riva’s performance becomes almost entirely physical, relying on her effortless ability to convince audiences of her declining health and mental devastation with her facial expressions and evocative eyes. On the other hand, Trintignant carries much of the film’s weight with his brilliantly conflicted portrayal of frustration and total surrender to the needs of his wife.

The film’s third “character,” as it were, is the apartment where most of the film’s action takes place. A set completely constructed from scratch, the space feels lived-in as if holding the memories of the decades-long relationship in its walls. As the film moves on and Anne’s health and physical mobility decline, the walk from room to room feels longer, the bookshelves get higher, and the bathroom seems further away. Much like the ever-changing apartment of Florian Zeller’s “The Father,” what began as a welcoming home now feels like a suffocating maze trapping us within. Georges and Anne’s life has now become our own. Haneke suggests our completeness in the couple’s lives and the outcome of the film’s story.

Haneke has never used his film’s titles as cryptic poems containing hidden double meanings. The film is, plainly, about love. Other characters visit the apartment and show their love to Anne through different reactions. Her adult daughter Eva (played by Isabelle Huppert) breaks down at her mother’s condition, a crew of nurses behaves with professional apathy, while a former piano student lets his curiosity get the best of him. Georges witnesses it all, achingly aware of his limited ability to ease Anne’s pain. All characters involved, including Haneke and the audience, know, despite our discomfort, that this is not a tragedy. It is not foreign or exceptional. The story does not focus on the misfortune of falling victim to a specific rare disease but the cruelty of aging and the frequent lack of dignity accompanying our last moments on Earth. Like his past thrillers that have rejected notions of fairness and the triumph of good over evil, the film does not offer viewers any moment of satisfaction or relief, nor does it actively try to disturb us. In typical Haneke fashion, it leaves us with a deluge of questions about aging, dying, grief, and of course, love, but never dares to give an answer to any of them.