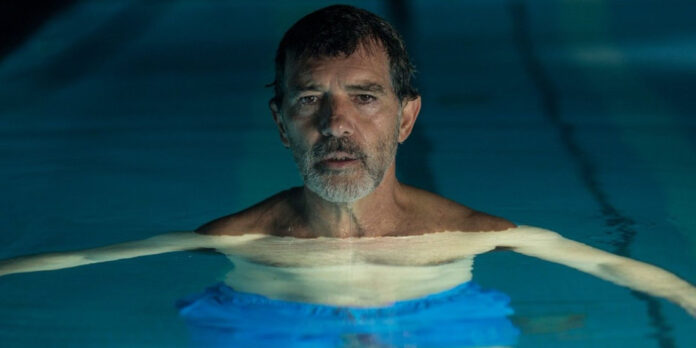 THE STORY – A film director reflects on the choices he’s made in life as the past and present come crashing down around him.

​​​​​​Pedro Almodóvar exploded onto the big screen with “Pepi, Luci, Bom” (1980) but it wasn’t until 1988 that he had his first major critical and commercial success on a global level with his film “Women on the Verge of a Nervous Breakdown” which coincidentally introduced the world to actor Antonio Banderas. Almodóvar has remained at the top of his game for the last thirty years and he continues to dazzle us all with his visually stunning, original and often darkly amusing work. His latest film (which is his 21st feature) is essentially taking the viewer on a journey back to where it all it began. “Pain and Glory” is an emotional rollercoaster of a film in which Almodóvar draws heavily from his own childhood and reflects on his own creative process as a filmmaker in a rather daring, bold and honest fashion.

With “Pain and Glory”, Almodóvar manages to weave together two different narratives and pulls off his usual magic trick of telling a story within a story. The film follows aging writer and director Salvador Mallo (Antonio Banderas) who has become a recluse after the passing of his mother. Mallo is a man who suffers both physically and emotionally. He has every alignment known to man, even tying up his own laces is a struggle. Nothing seems to bring him any pleasure, he collects art and while his house seems full of vivid colors (bold reds, luscious greens, sunshine yellows), it has the atmosphere of a museum. Beautiful to look at, but lacking any real warmth and comfort. In “Pain and Glory”, there seems to be a recurring theme about what makes up a home. Is it the people who live with you or is it the physical appearance of a home?

One of Mallo’s most celebrated films, “Sabor”, has recently been restored and is now set for re-release, which prompts Mallo to seek out the star Alberto Crespo (Asier Etxeandia). Mallo hopes to have Crespo introduce the film and host a Q&A session. The only issue is that the two of them haven’t spoken since the film’s premiere over thirty years ago. Crespo is a functioning heroin user, although it was his drug-taking that annoyed Mallo (he didn’t like the performance that Crespo gave whilst being on the drug). The two men reconcile and Mallo finds himself participating in taking heroin which prompts him to start having flashbacks of his childhood in Paterna, where his mother Jacinta (Penélope Cruz) does her best to ensure that her son receives the best education possible.

“Pain and Glory” is very much a film which taps into the concept of pain, Mallo is a man who is tormented by his pain, but he is also tormented by his past and his pride which acts as more of a hindrance than his aliments. Pride is what kept him from speaking to Crespo for years, and pride is what keeps him from seeking assistance from attaching his name to a monologue which Crespo wants to perform. Almodóvar presents us with the idea that in order to get past our pain, we must swallow our pride and address our past. Once Mallo has completed his journey back into the past, he becomes reconnected with his passion for art and there we get to see the glory that makes up “Pain and Glory”.

Although “Pain and Glory” is very much an Almodóvar film, the film also belongs to its leading actor Antonio Banderas. Banderas is almost unrecognizable here. He becomes truly lost in this character and gives us a very raw, honest performance of this complex man without ever edging into melodrama which some actors may have been inclined to do so. Almodóvar manages to bring the best performance out of Banderas and allows him to prove his acting chops, showing us how serious and dramatic Banderas can be as an actor. Banderas delivers a career-best performance here, and it is hard to see why he walked away with the best actor award at this year’s Cannes Film Festival. The hype is real, and it would be a crime if he wasn’t nominated for the Oscars.

Banderas isn’t the only actor worthy of praise. The younger version of Mallo is played by the splendid Asier Flores who seems wise beyond his years. Penelope Cruz delivers a strong performance as the younger version of Mallo’s mother, presenting us with a feisty, determined woman who is eager to give her son the best opportunity possible to get further in life. Julieta Serrano plays the older version of Jacinta Mallo and presents us with a woman who is still clinging onto that feistiness that her younger self had. The brief, intimate scenes between Banderas and Serrano will evoke strong emotions and will resonate to all of us who have suffered from the loss of a parent.

There are slight issues in terms of pacing with the build-up to the second and final act feeling a little tedious at times, and the flashback scenes feel a little sparse leaving us craving for more. Still, “Pain and Glory” showcases what Almodóvar does best as a director. He presents us with his personality and identity in all of its glory, and he continues to create wonderfully, complex, and often emotional stories of personal growth and exploration. Mostly Almodóvar presents us with the hope that all the pain we must suffer and endure is worth it, and in the end, it will transform its glory.