“THE POWER OF THE DOG” 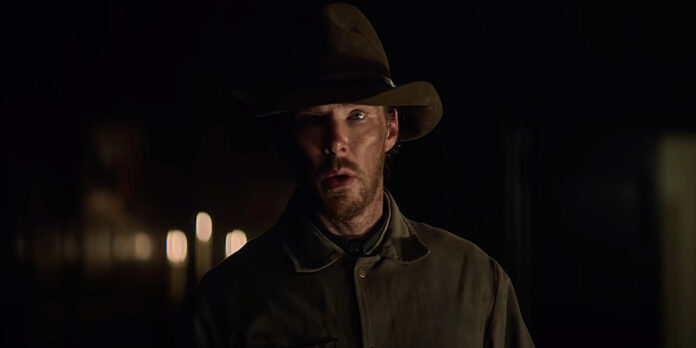 THE STORY – Charismatic rancher Phil Burbank inspires fear and awe in those around him. When his brother brings home a new wife and her son, Phil torments them until he finds himself exposed to the possibility of love.

​​​​​Jane Campion’s “The Power of the Dog” has been one of the year’s most anticipated titles for months. The eighth feature film from the Palme D’Or winning director (“The Piano”) premiered at the Venice Film Festival, where Campion received the Silver Lion for Best Director. Campion presents the audience with a superb exercise of competence: skilled camera work and cinematography, reliable performances, practical sets and costumes, a genuinely wonderful score, all with a capable hand behind it all. As stated, all these aspects are adequate, but what they lack is that final turn of the screw to transform “The Power of the Dog” from a good film, maybe one of the best of the year, into a great one, one that stands the test of time and leaves a lasting impression on the art form as a whole. This proximity to greatness makes the film’s failure to land squarely on its feet all the more frustrating.

From the beginning, the film threatens to turn the tropes of the classic western on its head. Gone is the heroic gunslinger and kind-hearted woman sent to help him see the error of his ways, and in its place remains faint impressions of characters with little to say beyond that which lies on the surface. At just over two hours, the film follows a significant chapter in the life of Phil Burbank (Benedict Cumberbatch), a supposedly ruthless ranch owner hell-bent on terrorizing his brother George (Jesse Plemmons), and those around him. Though cast against type, Cumberbatch effectively conveys a sense of menace, with his deep voice and imposing frame lingering over the scenery even off-screen. Among the film’s many fine performances, his will undoubtedly be the closest that comes to awards conversation, and rightfully so. It’s possibly the best work Cumberbatch has ever done in a career that has already provided many wonderful turns.

Phil’s wickedness is meant to be established in the film’s first half with the arrival of George’s new wife, Rose (Kirsten Dunst). Disgusted by his brother’s new-found-love and marital bliss, Phil makes no effort to welcome his sister-in-law, rejecting her kind advances and teasing her insecurities, eventually leading her to alcoholism and reclusiveness. It is in this foundational hour where the film’s problems begin to arise. To sympathize with the despondent Rose, the audience should understand and share some of her fears towards Phil. However, the film effectively portrays him as a son-of-a-bitch bully and a bit of a scrooge; he’s still not much more than a nuisance. With these unsavory acts diluted over the space of a slow first hour, we get to the film’s mid-point wondering why all these folks are so melancholic without much supporting evidence to help contextualize their actions and feelings.

This frustration with the film’s first act is not aided by the fact that Dunst, one of the most talented and underrated actors of her generation, is vastly under-utilized in her role. She has little more to do than fret, snivel, and portray nervousness. Unfortunately, the same can be said of her partner onscreen and off. As George, Plemmons has little to do with his character other than being what Phil is not, that is kind, gentle, and subservient, ultimately not much more than a wet blanket. While this antithetical character is not in itself a flaw, the casting of Plemmons, who has already established himself as one of modern cinema’s great talents, is a missed opportunity for something which could’ve been truly special. Equally puzzling is the casting of several prominent actors in bit parts, such as Frances Conroy as Phil and George’s mother and Keith Carradine as the governor, doing the bare minimum in these thankless roles.

The film’s core conflict, which causes Phil to be so ill-tempered, has been long exhausted throughout cinematic history and even western history to the point of stereotype (to avoid spoilers, it shall hitherto be referred to as an “albatross”). While an albatross would certainly be a pain in the neck to anyone living in 1925 Montana, as a central subject for a film released in 2021, it does not do enough to require further examination and dissection. There is a lack of modern sensibility and no unique lens to speak of. Alluded to with overtly suggestive imagery, rather than the sword of Damocles, it seems to hang over the movie like a sewing needle.

The story’s second hour is notably more compelling than the first. With the return of Rose’s son Pete (Kodi Smitt-McPhee) from medical school, whom Phil and his ranch hands had previously mocked him for being an effeminate mama’s boy, a new player enters the arena, one with a considerable amount of secret weapons at his disposal. His presence profoundly affects Phil, leading to moments of vulnerability and thus a chance at greater development for both his character and the story. As their relationship takes an unexpected turn towards the film’s end, there is hope for that bang of excellence the audience has been expecting throughout the last two hours. Instead, we are handed an abrupt finish, and our anticipation is reduced to a whimper.

Throughout “The Power of the Dog,” we have been gifted with a new haunting score by composer Johnny Greenwood. The film opens with a gentle strum, suggesting a kind of order in a world where there is none. This effective accompaniment implies a build-up of atmosphere that will eventually pay off to great satisfaction that never arrives much to our disappointment. Campion’s adaptation needed something, whether that be an outstanding supporting performance, out-of-this-world cinematography, dialogue that lingers in your mind for days afterward, etc., to cement its awards potential and continual legacy fully. When all is said and done, “The Power of the Dog” ultimately reminds us of what Westerns have been saying for over a century, that life is “solitary, poor, nasty, brutish, and short.”