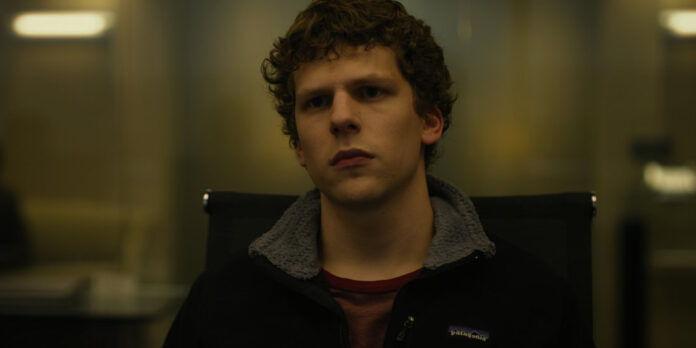 THE STORY – In 2003, Harvard undergrad and computer genius Mark Zuckerberg (Jesse Eisenberg) begins work on a new concept that eventually turns into the global social network known as Facebook. Six years later, he is one of the youngest billionaires ever, but Zuckerberg finds that his unprecedented success leads to both personal and legal complications when he ends up on the receiving end of two lawsuits, one involving his former friend (Andrew Garfield). Based on the book “The Accidental Billionaires.”
​
THE CAST – Jesse Eisenberg, Andrew Garfield, Justin Timberlake, Armie Hammer & Max Minghella

​​​​As this retrospective is being hosted on a site that dedicates itself to award season coverage, it’s difficult not to look back on this film within the context of its particular period. Few films this decade have been able to have as much of a lasting impact in the culture for what it did not end up winning when compared to what it did. That narrative has helped the film become cemented as one of the great achievements in filmmaking from the modern era. It’s a bold statement to place onto any film, but it is one that I cannot readily deny.

The film sets out to tell the story of the invention of Facebook, and the many notorious turns and double-crosses it took to become the behemoth that it is today. The tale is spun like a Shakespearean tragedy, and at the center is Mark Zuckerberg (Jesse Eisenberg). After reeling from the breakup with his girlfriend Erica (Rooney Mara), Mark is set on a path of that indulges in creation and destruction. Collaborating with his best friend Eduardo (Andrew Garfield), he sets in motion the building blocks that will eventually become the social networking site. Along the way, his meetings with Sean Parker (Justin Timberlake) and the Winklevoss twins (Armie Hammer) complicate these proceedings further. The narrative flashes between two separate depositions, where some version of the truth is sure to be revealed.

If I were making a list of people who should be given credit for the film’s success in order of importance, I’d argue the person who at the top is Aaron Sorkin. His screenplays have a reputation for being littered with snazzy dialogue that features sharp observations and quick witticisms that come off like music to your ears. It’s no different in this case, and it is inescapable how much utter joy there is whenever the actors open their mouths and allow Sorkin’s words to flow out of them. The structure of the story that Sorkin weaves is exhilarating to see unfold, and it is a special gift he wields with every new work.

Still, one cannot toss aside the enormous contributions of director David Fincher. His meticulous, calculated exactitude as a filmmaker feels like a perfect marriage with Sorkin’s material, given how both men find a necessity in precision. Every frame that Fincher sets has a deliberate purpose, in lockstep to the rhythm of Sorkin’s words. His direction guides us through a world of complex characters and makes each scene weighted with the engrossing human tension. The level of enthusiasm that is brought to a film made up mostly of scenes with people giving extended speeches can be a difficult task, but Fincher is a master craftsman and knows how to pull an engaged audience in for a thrilling ride.

Fincher’s abilities help to elevate all the glorious technical aspects of the film. Jeff Cronenweth’s cinematography is an aesthetic that has become familiar with Fincher’s filmography, but the exactness of every frame’s composition lends itself well to the film’s sensibilities. Same with the editing, which matches the kinetic energy of the dialogue and pace in an electrifying way. The score by Trent Reznor and Atticus Ross at first feels quite idiosyncratic, but it certainly has a way to lure you into every scene, whether blasting techno riffs or somber blended notes of piano and strings. It’s a unique piece of composition that works quite well in the film.

High praises can also be delivered amongst the entire cast as well, who do the exemplary job of bringing life to these intricate characters. I had been a fan of Eisenberg’s for a few years before the release of this film, pretty much since The Squid and the Whale. However, this was where his true potential was finally shown. The manic energy he had showcased in other works is still present here, but the sinister monster that brews just beneath the surface is sincerely felt as well. The nebbish image he displays with Zuckerberg blends well with the vindictiveness and insecurities he holds. The insults lash out like a threatened animal, and it makes his motives all the more intriguing. As the public persona of Zuckerberg has become even more complicated throughout the years, watching Eisenberg’s interpretation serves as a further interesting analyzation of this man.

However, Eisenberg is not the only member of the cast that deserves praise either. Garfield also maintains a grounded presence in his scenes, often acting as an emotional foil to Mark. His adversarial friendship is well played in Garfield’s hands, selling the sincerity of their bond that slowly turns contentious. It’s a performance that balances humor and somberness well, and it’s very well suited. Timberlake also delivers a terrific turn here in a role that has the potential to be histrionic but is played within the right key for him to always produce a devilish charm.

As the “Winklevii”, Hammer has the difficult job of creating two different characters that feel individually fleshed out, and he manages to pull off that magic trick with incredible effectiveness. In many ways, he is the film’s secret weapon as a set of characters who do not get to indulge in theatrics. As such, their distance paints an even deeper portrait, and Hammer successfully glides between them. Even Rooney Mara in her brief appearances makes a lasting impact. She strikes at the heart of Mark’s flaws and serves as a constant reminder that his intentions, while grand and ambitious, are never pure. It’s a performance that leaves you wanting more because of how wholly effective it is. All in all, it’s an incredibly well-rounded cast.

While I find so much to adore about this film, no piece of art is impervious to criticism. There is an element that is a deficiency that I believe deserves to be singled out. As celebrated as Sorkin has been throughout his career, a common complaint has been his treatment of female characters, and the issue is consistent here. The film already features them sparsely, and the few that do show up are mostly shallow caricatures. This is especially prevalent in the Christy Lee character, a woman with no identification other than arm candy to one of the central characters who turns psychotic on a dime. It’s unfortunate that, apart from Erica, no other woman is given any kind of depths of complexity as the male counterparts. While this can serve the story as to how these men’s egos and personas insulate themselves to an unhealthy degree, it does mean some of those supporting characters get tossed aside with little fanfare.

Even though there are some elements to the film that I wish were given stronger treatment, I must say that my overall enjoyment of the film has not diminished that much since I first saw it. The craft on display is impeccable like every Fincher production, and there’s an equally brilliant screenplay to support him. Every member of this ensemble also soars in their performances, even when you might be left wanting more. What makes the film still maintain so much resonance is the depiction of human drama these characters are going through, and no matter how much more complicated the depiction of the social media landscape may be, it is still worthy of examination.