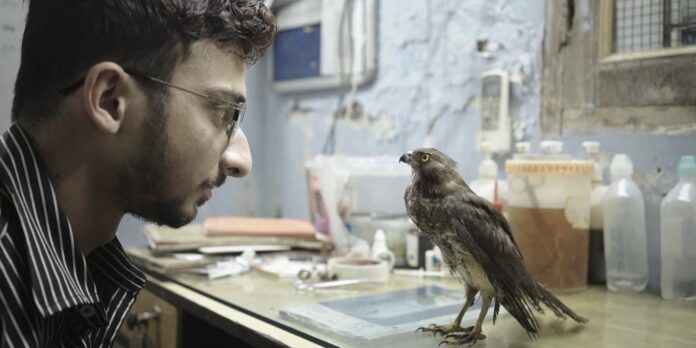 THE STORY – As legions of birds fall from New Delhi’s skies and the city smolders with social unrest, two brothers race to save one of the casualties: a majestic black kite, a bird of prey essential to their city’s ecosystem.

If you were to create a logline for director Shaunak Sen’s new documentary “All That Breathes,” something like “Two brothers work together to rescue and treat injured birds in Dehli, India,” would be wholly accurate and concise. But when you stop to watch the film, it becomes quickly apparent that this doc is so much more — at times funny, angry, melancholic, and always intensely human.

The film, which is the only documentary to win top prizes at both the Sundance and Cannes Film Festivals, focuses on those brothers, Mohammad Saud and Nadeem Shehzad, who were raised by their late mother to appreciate all living things — whether they be plants, insects, animals or people — never differentiating between all that breathe. While operating a soap dispensary business out of their garage, Nadeem (who handles the business end of things) and Saud have a side gig operating a clinic for rescuing and treating injured animals that populate the densely-packed streets and skies of Delhi.

The environmental pollution in Delhi hangs like a literal cloud over much of the film, affecting both humans and creatures on the ground. Still, it is the toxicity of the city’s air (said to be 12 times worse than even polluted Beijing) that is proving to be especially deadly for the city’s most populous bird, the black kite, so much so that kites have begun to fall from the sky in massive numbers. This development puts added pressure on the brothers’ clinic, as Saud and his endearing (if at times hapless) assistant Salik must often treat dozens of injured kites daily. In addition, the black kite holds a special meaning for the men, as it is said among Delhi’s Muslim community that feeding kites earns “sawab” (religious credit) so that the meat you offer eats away your personal difficulties.

Those difficulties in Delhi, however, are not limited to the environment ever since religious rioting has become a regular occurrence with street violence, fueled by anti-Muslim prejudice, coming within blocks of the brothers’ clinic. That, coupled with the crumbling infrastructure of their poor neighborhood that may soon keep donors from supplying them with injured birds, has caused Saud and Nadeem to reevaluate the clinic’s future.

If there is a fourth important character in “All That Breathes.” Delhi’s ecosystem appears to be falling apart rapidly, forcing even non-human creatures to adapt to their environments. Their struggle is captured in the detailed cinematography by Ben Bernhard, who photographed the porcine doc “Gunda” (and knows his way around animals), and the crisp editing by Charlotte Munch Bengtsen and Vedant Joshi which keeps the quiet film evenly paced.

As powerful an environmental statement as “All That Breathes” makes, Sen never loses what the heart of the film is; the element makes the film breathe, if you will. That’s the selflessness of the work being done by Saud, Nadeem, and Salik in their small rescue center. Sen never presents them as saints — the brothers understandably despair at the ever-increasing need for their efforts and (Nadeem in particular) would love to be able to get out from under the responsibility. But stay on the job they do, knowing that, while they can’t stop the growing pollution by themselves, they can at least try to stem its tide of death, one creature at a time. With the perceptive eye of a skilled documentary filmmaker behind the camera, “All That Breathes” is a moving celebration of the brothers’ selfless sacrifice.

<b>THE GOOD - </b>The efforts of two Muslim brothers to rescue and treat injured birds suffering from environmental damage in Delhi are the focus of Shaunak Sen's latest documentary, which movingly captures the power that individuals can bring to fighting the destruction of our ecosystem.<br><br> <b>THE BAD - </b>With little dramatic conflict to drive the action, the film may not impact viewers as much as it might.<br><br> <b>THE OSCAR PROSPECTS - </b><a href="/oscar-predictions-best-documentary-feature/">Best Documentary Feature</a><br><br> <b>THE FINAL SCORE - </b>8/10<br><br>"ALL THAT BREATHES"