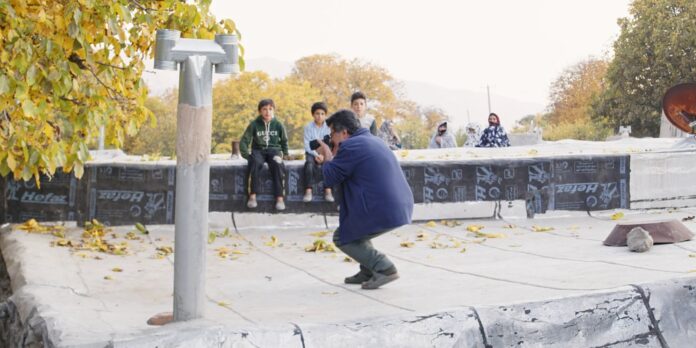 THE STORY – Follows two parallel love stories in which the partners are thwarted by hidden, inevitable obstacles, the force of superstition, and the mechanics of power.

Internationally renowned film director Jafar Panahi’s latest feature, “No Bears,” is his fifth film since receiving a 20-year ban on filmmaking for leaving Iran. Yet another project filmed in secret by the master filmmaker, one might be surprised at how lively and engaging “No Bears” often is, despite the threats and limitations imposed upon him. Panahi not only writes and directs but also stars as himself, or at least a version of himself, directing a film from afar. It’s no minor miracle that he manages to have such a fresh voice, still as subversive as ever, condemning tradition and oppression while crafting a genuinely entertaining story in the process.

Opening on a bustling city street, we see a couple (Mina Kavani and Bakhtiar Panjei) preparing to leave somewhere. The man has brought the woman a long-awaited stolen passport so she can travel to Europe. He won’t be able to travel with her but insists that she go on without him. She’s upset and refuses to go. Suddenly someone yells, “cut.” As an assistant director, Reza (Reza Heydari) walks in to frame; he stares directly into the camera, talking to Panahi as he directs the film we are watching remotely. Through an unreliable internet connection in a remote Iranian village on the border of Turkey, Panahi attempts to make a new film in secret, away from too many eyes in Tehran. His attempts to keep to himself suddenly go awry, as his presence raises many questions among the villagers, and tensions begin to rise.

This isn’t the first time Panahi has played himself in a film, and it’s not vanity. By framing “No Bears” as a director in a small village, he highlights the challenges for creative freedom and how those challenges bleed out more insidiously to other areas of culture. Panahi’s host, Ghanbar (Vahid Mobaseri), does everything he can to be a gracious host but lets the director know that the villagers fear he’s spying on them. They welcome the outsider but want to know his intentions. Rather than worry about this, Panahi is amused by the villagers and gently pokes fun at their concerns. This quiet humor is the most surprising aspect of “No Bears.” In approaching a story from a jailed filmmaker, one would expect something understandably serious, highlighting the oppression with ferocity and heavy drama. Panahi takes a more dignified approach, exposing the absurdity of his situation with a light touch, though no less piercing.

Panahi’s amusing approach begins to wain as darker elements of the story creep in. Reza takes Panahi on a late-night excursion to check out a filming location, failing to warn the director that they are heading to the border of Turkey. Panahi leaps back in horror, realizing the gravity of where they are. Upon returning to the village, the director finds himself tangled in a web of the villagers’ drama involving a photo he may or may not have taken. “There will be blood,” warns a young woman whose fate hangs in the balance because of this photo. While the story begins pretty simply, it gradually builds into something much more engrossing. “No Bears” brilliantly leaves so many things unseen, including the all-important photo, making the ensuing drama all that much more absurd and enraging. Panahi’s character refuses to engage with the patriarchal traditions of the village, despite the threat they pose to people in the town. Because of Panahi’s control over what the audience does and doesn’t see, the story becomes darker and more compelling.

Most impressively, “No Bears” maintains a humane light on everyone in the film, even those seeking to do the most harm. These traditions and systems are the film’s targets more than the individuals. It’s a tricky line to walk, as is the line between humor and tragedy, but Panahi makes it look easy here. Imaginary borders do irreparable harm to both the director and the villagers, as silly as the boundaries may seem. When asking about bears he’s been warned of, Panahi is told, “There are no bears. Stories are made up to scare us.” This is the simple yet powerful thesis of “No Bears.” Oppression stems from tradition and wreaks havoc in every direction.

Despite the absurd humor found in “No Bears,” the dark turn the story takes at the end is tragically prescient. In real life, after completing this film, Jafar Panahi was jailed again in July 2022 for inquiring about another imprisoned filmmaker in Iran. It adds yet another metatextual layer to this story that further highlights the power of Panahi’s voice. “No Bears” is one of the year’s best films from one of the most vital filmmakers in the world.

<b>THE GOOD - </b>Subversive and surprising. A nuanced story that starts in a simple manner but becomes a more engrossing tangled web and quietly comedic. It's vital and dramatically heavy but still genuinely entertaining.<br><br> <b>THE BAD - </b>Shot in relative secret, the cinematography is nothing special, but it gets the job done. <br><br> <b>THE OSCAR PROSPECTS - </b>None<br><br> <b>THE FINAL SCORE - </b>8/10<br><br>"NO BEARS"