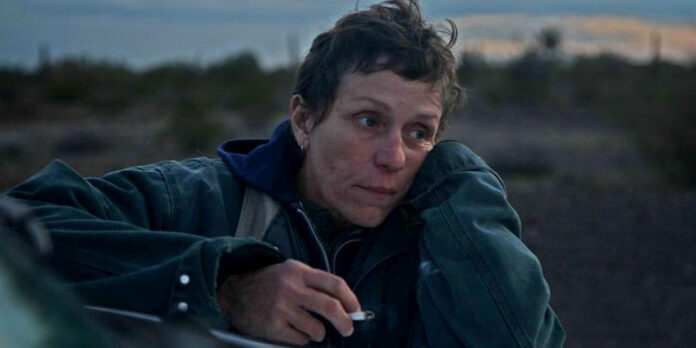 THE STORY – Follows a woman in her sixties who, after losing everything in the Great Recession, embarks on a journey through the American West, living as a van-dwelling modern-day nomad.

​Adapted from Jessica Bruder’s book of the same, Chloé Zhao’s “Nomadland” immerses itself in the culture of workampers – modern-day nomads who make a living doing seasonal minimum-wage labor while living in vans and RVs. These people – mostly women and between 55-75 years of age – largely play themselves in the film, with the notable exceptions of David Strathairn and Frances McDormand, the latter of whom plays Fern, our point of view character.

Fern’s husband has been dead for some time. They lived and worked in Empire, Nevada, a company town that was abandoned when the United States Gypsum Corporation plant there closed its doors after the demand for sheetrock plummeted in 2011. McDormand is an ideal choice to play Fern. Her staunch can-do attitude and straight-shooting wit fits in seamlessly with the ensemble of real people she’s interacting with. Her face is one that looks forged from hard work, concealing deep emotions that overflow into laughter often, but rarely into tears. McDormand is working in a lower register than she usually does, but she turns in a wonderful naturalistic performance nonetheless, saying so much about who Fern is with tiny changes in her face and body. Fern likes work. She needs to work so that she has something to fill her days, but her history has left her with few marketable skills, so she is stuck traveling with the seasons to where the work is and sleeping in her van, no matter how cold it gets outside. She keeps bumping into Dave (Strathairn) in her travels, and he’s quite obviously smitten with her. Will she go with him to meet his new grandson? Will she settle down? Or even just hitch her van with his?

The film is only cursorily interested in these questions, focusing more on Fern’s physical journey than her emotional one. Zhao and cinematographer Joshua James Richards want to immerse us in this subculture of the American West, making sure that we see, hear, and feel what these people do. As brutal as this life can be, what with the sleeping in a cold van and being woken up in the middle of the night being told to move and the high bills from any car trouble, it can also be quite beautiful, as you’re living in the fresh air and wide-open spaces of some of the world’s most awe-inspiring landscapes. Richards shoots these landscapes in stunningly gorgeous colors, with numerous scenes shot at magic hour that give the film an almost indescribable purple-pink-orange hue that reflects the land back onto the characters. It’s an artful way of reinforcing the idea that these people are the modern-day embodiment of the frontier spirit that built America.

Fern’s emotional journey isn’t entirely shafted, however. In fact, her emotional journey is very tied to her sense of place – as she tells a friend’s daughter, “I’m not homeless, just houseless.” Sometimes home is a place, sometimes it’s a community, and sometimes it’s a feeling. Fern makes a home in all three of those ways, but it is not always apparent how she does so. It comes to a head in the last act, in a dialogue-free sequence that is shot, edited, and performed just as beautifully as the rest of the film. But the film has been so gentle with Fern – always observing, never editorializing – that when this happens, it doesn’t register as a big moment. Instead, it feels like just one more stop on her never-ending, elliptical journey between jobs.

This in itself is a potentially powerful statement about this way of life that so many Americans find themselves forced into, but the film’s most impactful scene is closer to its middle when Fern’s friend Swankie (a long-time workamper) opens up to her about her past. This is the moment where the film’s alchemy is at its most potent, where its perfect use of Ludovico Einaudi’s music and Richards’s nighttime cinematography combine with Zhao’s script and the performances to create something uniquely moving. It’s a powerful scene, all the more so for how calm and quiet it is. The film isn’t quite able to recreate that magic again, but this is where the heart of the film truly lies – not with Fern herself, but with the entire community of real workampers living in the margins. Having Fern as our main character means that her personal journey doesn’t land the emotional gut-punch that it could have, but Zhao’s canvas is so much bigger than one person. The magic of that bigger canvas is that you become a different person for having watched “Nomadland”. Knowing these people and places changes your perspective. Not many films have that kind of power, and Zhao’s ability to do so while keeping her film’s tone so quiet speaks volumes about her talent. “Nomadland” might not be her masterpiece, but it’s certainly a statement that she is a major force in filmmaking.