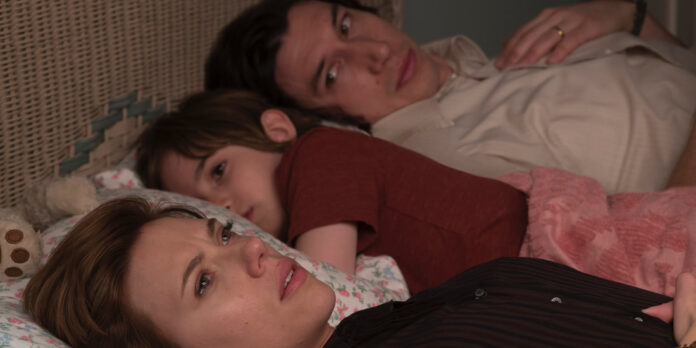 THE STORY – A stage director and his actor wife struggle through a gruelling, coast-to-coast divorce that pushes them to their personal and creative extremes.
​
THE CAST – Scarlett Johansson, Adam Driver, Laura Dern, Alan Alda & Ray Liotta

Noah Baumbach has always been on the cusp of making a truly great movie.  He’s had several good movies. Some very good. But none that I would call “great.” With his latest film “Marriage Story,” Noah Baumbach has delivered easily his best film yet. It’s raw, honest, emotionally devastating and yes, it is also great. It’s also surprisingly funny and sweet, as it captures real human beings, stuck in a real relationship, with real problems. Baumbach’s film goes even further than the emotions of his two central characters, as he also explores the soul and money-sucking legal system that both Nicole and Charlie find themselves in. It’s the best divorce movie of its kind since “Kramer vs. Kramer,” featuring the two best performances of Adam Driver and Scarlett Johansson’s careers.

Charlie (Adam Driver) is a successful New York-based theatre director with his wife Nicole (Scarlett Johansson) as his main actress. The two are married with an 8-year-old son named Henry (Azhy Robertson) but they are currently getting a divorce. Frustrated with her husband’s selfishness, Nicole decides to pursue her dreams of acting further by moving to Los Angeles and seeking full custody of Henry. Charlie now must travel between both New York and LA to balance his work and personal life, while consulting with two divorce attorneys (Alan Alda and Ray Liotta) over how to handle the particulars of his divorce while Nicole seeks her own counsel from a tough LA-based lawyer named Nora Fanshaw (Laura Dern). While everything started off with the best intentions, things between Charlie and Nicole are about to get ugly as they get ready to go to court.

Opening with back to back voiceover narrations told from both Charlie and Nicole’s point of view of one another as they are forced by a counselor to write down their positive thoughts about the other, “Marriage Story” never strays from striking an equal balance between both characters’ desires, thoughts, struggles, and fears. One could make the argument that more of the film is told from Adam Driver’s perspective (let’s call it a 60-40 split). However, in terms of character motivation and emotional investigation into the psyche’s of each, there is never a moment where we don’t understand where Charlie and Nicole are coming from in regards to their feelings towards one another. This all culminates in one of the best on-screen verbal arguments in cinematic history as each of their imperfections are picked apart, piece by piece until tempers are exploding, tears are flowing and walls are being punched. Both Adam Driver and Scarlett Johansson deliver the best work of their careers as the couple who have fallen out of love for each other. In their vulnerability, they are equal parts relatable and frustrating, resulting in a chemistry and dynamic that will have people talking and debating for some time over who is right and who is wrong in their relationship.

The supporting cast are all equally fantastic as well in their roles as well. Laura Dern brings some of her “Big Little Lies” energy to the role of Nora. Alan Alda brings wisdom and a playful expertise to the role of Bert while Ray Liotta is intense and commanding as Charlie’s second lawyer Jay. Julie Hagerty and Merritt Weaver are downright fun and entertaining in their all too brief roles as Nicole’s mother and sister. And Azhy Robertson brings a level of innocence to the role of Henry, reminding Charlie, Nicole and the audience what is really at stake here when all is said and done.

When I stated that this is Noah Baumbach’s best film to date, part of that is also because this is also his most technically polished film to date. The editing employs non-showy (but still effective) methods to handle the delicate balance of Charlie and Nicole’s perspectives. The classical-sounding score by Randy Newman is spirited and adds to the life of the film. The cinematography by Robbie Ryan (“The Favourite” and Baumbach’s own last feature “The Meyerowitz Stories“) is also non-evasive and subtly captures the mood of both New York and Los Angeles. And on the storytelling side, to go along with that amazing verbal fight scene mentioned before, is also what might be two of Baumbach’s best scenes he’s ever shot. One involves an appraiser coming to observe how Charlie is with Henry in his new LA apartment that has bloody hilarious results. The other is a rendition of the Stephen Sondheim song “Being Alive” performed by Adam Driver in a single take.

Much will be said about Baumbach’s personal connection to the story and its ties to his previous relationship with actress Jennifer Jason Leigh (which also ended in divorce). If Charlie is meant to be a stand-in for Baumbach as a way to therapeutically come to grips with what happened, then he’s not letting himself get off easy as Charlie is portrayed to be incredibly selfish and closed off. Some will feel it’s not enough and will want to see Charlie as an all out villain. Some will feel the same way about Nicole. These are not ugly people though and they should not be viewed in such black and white terms. This level of complexity is one that I’m grateful exists within “Marriage Story” and I feel comfortable judging it as a piece of art. I’m not here to pass judgment though on the two people it may be based on and what went down between them. I am here to judge this movie and this movie only. And as stated before, this is a great movie.

“Marriage Story” is filled with many interesting character beats and subtleties, resulting in a deep exploration of a relationship and marriage that feels all too real due to the richness of Noah Baumbach’s writing and the incredible performances from Adam Driver and Scarlett Johansson. It’s not only one of the best films of 2019. It’s one of the best relationship dramas ever made. It’s not all doom and gloom though as Baumbach’s latest is not as depressing as “Revolutionary Road” or “Blue Valentine” though. It’s got just as many funny moments as it does dramatic moments, presenting a look into two people’s lives that feels authentic and does not provide easy answers for resolution. However, what it does provide, feels just right.