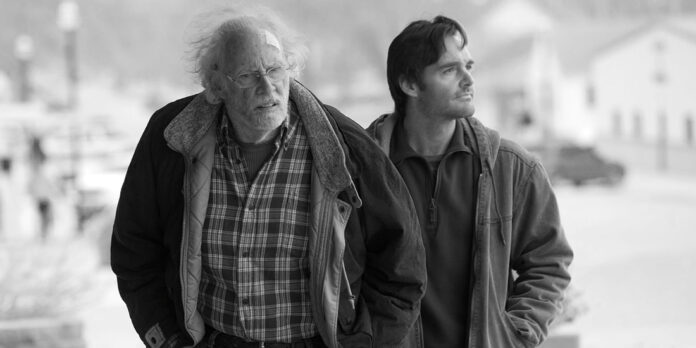 ​THE STORY – Cantankerous old buzzard Woody Grant (Bruce Dern) can barely walk down the street of his home in Billings, Mont., without stopping for a drink. So when Woody receives a sweepstakes notice in the mail and insists on making a 750-mile trip to Lincoln, Neb., to collect his prize, it falls to baffled son David (Will Forte) to accompany him. During a stop in their Nebraska hometown, word gets out about Woody’s fortune, first making him a hero, then later, the target of predatory people.

Often, Alexander Payne films are known for their absurdist set-ups and dark satirical humor, taking a comedic concept and unexpectedly mining it for rich emotional resonance that was previously unforeseen. From stories about drug-addled pregnant women becoming embroiled in the national abortion debate (“Citizen Ruth”) to those about a high school teacher conniving to keep an ambitious female student out of school government (“Election”) to those focusing on a man discovering his wife was having an affair while she’s currently in a coma (“The Descendants”), no matter how peculiar the plot is, Payne never fails to give us complex, compelling characters to follow and make some grandstanding statement on society that sneaks up on us. And that’s precisely what made 2013’s “Nebraska” such a standout when it was announced. In contrast to these more thematically dense works, “Nebraska” had a seemingly simple and straightforward story, with no larger aims besides conveying a satisfying character study complete with charming comedy and pleasing performances. And yet, in this simplicity lies a moving meditation on a man who longs for one last “high” in his life, and in time, “Nebraska” becomes one of Payne’s most playful and poignant pictures, as a result.

For the most part, the film follows a familiar – but fun – structure. The story starts on the dreary David Grant (Will Forte), who, in the dead of night, is called to come to rescue his father Woody (Bruce Dern) from the side of a road in their hometown of Billings, Montana. Upon retrieval, Woody reveals the purpose for his late-night pursuit – a few days prior, he received a sweepstakes letter notifying him that he was the winner of a million-dollar cash prize, to be collected in Omaha, Nebraska. After reading the letter himself, David is confident that it’s some sort of mail scam. Still, Woody refuses to believe him, insistent on making his way to Omaha and taking home his million dollars, much to the annoyance of both David and his mother, Kate (June Squibb). When every attempt to keep Woody home fails, David throws his hands up in the air. He ultimately relents to his father’s wishes, agreeing to take him to Omaha despite Kate’s incessant demands to the contrary. And so begins a raucous yet emotionally rewarding road trip, full of eccentric encounters with old friends (and foes), a plethora of strange pit stops, and a surplus of secrets that finally see the light of day.

It should come as no surprise that the script here is a sharp-witted and satisfyingly satirical success – as is often the case in Alexander Payne films. But this time around, the director didn’t write it himself, instead adapting work by “The Confirmation’s” Bob Morgan. Still, it’s not hard to see what had Payne’s interest piqued; their sardonic sensibilities are a perfect match for one another, and Payne’s sobering direction complements Morgan’s stripped-down screenplay stupendously. In under two hours, Morgan creates a collection of curious characters who all stand on their own with individual peculiarities that don’t draw attention away from the central adventure in any capacity. His ability to flesh out this weird world in the most unflashy way imaginable is immensely admirable, and by the end of the film, you too feel as if you’ve known these people as long as David and Woody. The dialogue he affords these denizens is equally excellent, with an array of amusingly witty asides that catch you off guard with how cleverly comical they are. The seemingly stodgy surroundings and classic black-and-white cinematography may make some audiences feel that they’re in for a depressingly dour affair, but such a thought couldn’t be further from the truth. Though “Nebraska” isn’t devoid of darker drama, it’s an enormously enjoyable expedition for the most part.

Many of the film’s achievements can additionally be attributed to its expertly cast ensemble, led formidably by Forte and Dern. Forte is a fantastic foil to Dern’s wayward Woody, responding to his wacky whims with endearing exhaustion and effortlessly inhabiting this “everyman.” Meanwhile, Dern is just as delightful, fully immersing himself in the mind of a man who is doggedly determined to assure that his days of inspiration and independence aren’t yet behind him via this arduous trek. From his very first scene, you don’t see Dern – it’s solely Woody onscreen, as the actor becomes indistinguishable from this perplexing personality and ultimately conveys both his deteriorating mental state and his still sturdy devotion to this search. He is to be doubted at our own peril, as Dern fully sells Woody’s fervor on these travels, no matter what it may cost him. The tug of war between him and Forte’s David is thus brilliantly humorous to behold, and Morgan mines this dissimilar duo for all possible comedic material. Their relationship really is the heart and soul of “Nebraska,” and its evolution is endlessly engrossing the whole way through.

Those in the supporting cast are certainly no slouches either, with June Squibb’s caustic Kate serving as the standout, delivering one blistering barb after another in her defiance to David and Woody’s drive to Omaha. And, even though she primarily acts as comic relief throughout the picture, she is equally effective in her brief dramatic beats, as family secrets come to the surface and Kate is asked for her honest perspective on the Grants’ past. Stacy Keach is suitably sinister as a belligerent former business partner of Woody’s who aims to attain a portion of Woody’s prize, and he’s incredibly intimidating in each of his interactions with the Grant men. Finally, one can always count on the beaming Bob Odenkirk to handle some deftly written dry humor, and no matter how short his screentime, he charms here as well, adding a new dynamic to the Grant family upon his arrival as David’s older – and far more successful – brother Ross. With mere moments, he fits with Forte, Dern, and Squibb fantastically, and he makes himself a worthwhile member of this foursome.

Despite the astounding number of Academy Award nominations “Nebraska” racked up, some may be shocked to find that it’s not the most structurally complex or stylistically daring dramedy to receive Oscar recognition, but just because a story is simple doesn’t mean it has to lack thematic sophistication. If one looks past “Nebraska’s” supposedly “plain” packaging, they’ll find a compelling character-driven crusade dripping with depth that is delicately integrated into both Bob Morgan’s script and the two powerful lead performances from Forte and Dern. Payne is the master of melancholy. That mood manifests magnificently here as well, drawing audiences in and asking them to dig deeper into the particulars of the plot to discover its purest poignancy. And, after such an outrageously humorous (yet still heartfelt) odyssey, we happily oblige.