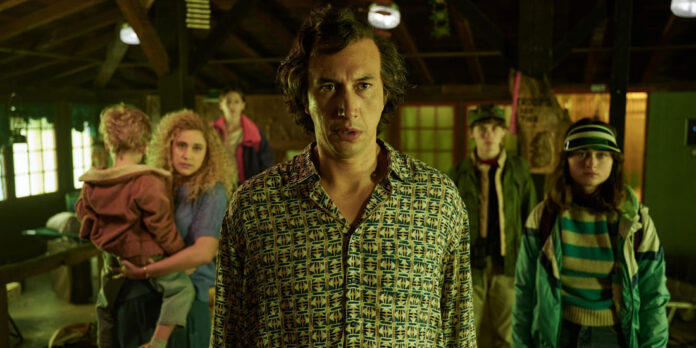 THE STORY – White Noise dramatizes a contemporary American family’s attempts to deal with the mundane conflicts of everyday life while grappling with the universal mysteries of love, death, and the possibility of happiness in an uncertain world.

“Do not advance the action according to a plan.”

That’s the mantra of Jack Gladney (Adam Driver), a distinguished professor of Hitler studies at a small Ohio college and the hero-of-sorts of Noah Baumbach’s latest film, “White Noise,” which marks the writer/director’s first foray into adapting a work from another writer. That source, Dom DeLillo’s acclaimed 1985 novel, presents a wide-ranging satire of America in the 1980s, from obsessions with media and upbeat consumerism to toxic misinformation and, above all, a preoccupation with death, a fear shared by both Jack and his wife Babette (Greta Gerwig).

One wonders why Baumbach, one of our most successful creators of original screenplays, would choose to adapt another artist’s work at this point in his career. And why “White Noise,” a novel that is so identified with another writer? Indeed, the narrative setting of a world panicked by the arrival of an airborne toxic event seems far afield from the familiar universe in which Baumbach has been so celebrated. The answer might be that at the core of “White Noise” is a perceptive look at a family, a subject that Baumbach has explored so successfully in his films, especially “Margot at the Wedding,” “The Squid and the Whale,” “The Meyerowitz Stories,” and, most recently, “Marriage Story.” Here, the blended Gladney family — this is the fourth marriage for both Jack and Babette — faces the usual domestic bickering that any large family would face, as the kids from the prior marriages try to merge (not too successfully).

In the film’s first act, titled “Waves and Radiation,” the family story is paired with a wicked skewering of academia, featuring a delightful performance by Don Cheadle as a visiting professor anxious to get his course on Elvis Presley legitimized by borrowing some of the esteem that his friend Jack has earned with his Hitler course (There’s a two-hander of a scene where Driver and Cheadle team up to lecture a class on the similarities between Elvis and Hitler that’s just delicious). The film’s recurring theme of how people, when frightened, often attach themselves to charismatic individuals, whether they be Hitler or Elvis, is an effective one, not without its contemporary political parallels.

The tone decidedly shifts in Act 2, “An Airborne Toxic Event,” when a freak accident sends a toxic gaseous cloud into the air, threatening the nearby population, forcing the still-bickering Gladneys to rush to the family station wagon in an attempt to flee to safety. The disaster movie vibe is one that’s new to Baumbach’s skill set, and he handles it deftly. The line of fleeing cars stuck in a mile-long traffic jam may remind one of the recent Gerard Butler disaster effort “Greenland.” Still, Baumbach takes a similar situation to the next level by focusing on the scared escapees, many spouting conspiracy theories as toxic as the outside air (COVID, anyone?) while looking for someone to lead them, a focus that only underscores the theme of hero worship raised earlier.

With two solid acts clearly established, Baumbach takes on post-disaster challenges in his third act, titled “Dylarama,” and here is where “White Noise” occasionally runs aground. While the film’s multitude of themes in the film’s early going makes for an excitingly promising mix, those themes need to be resolved, and few are. Instead, his screenplay narrows the act’s focus to the origin of Babette’s addiction to a mysterious drug, Dylar, and how that knowledge might turn Jack from someone who dies to someone who kills. It’s an interesting idea to a degree, but in light of the grand themes suggested earlier in the film, it offers a less compelling and satisfying resolution.

What’s never at issue is Baumbach’s skill with actors. Following his stellar work in “Marriage Story,” Driver never keeps us from being intrigued by his complicated Jack, and while Gerwig seems a bit underutilized in the film’s first two acts, she scores with a moving monologue when she comes clean to Jack that is among the actress’ finest screen work. The supporting performances from Raffey Cassidy, Jodie Turner-Smith, and Andre Benjamin are all solid across the board, providing enough backbone for this story to hold itself up.

While the entertainment quota in “White Noise” is still quite high given the film’s strong ensemble and often-sparkling dialogue, the potential greatness suggested earlier in the film’s runtime is never fully realized. Thus, the film ends on a slightly disappointing note, which is notably peculiar from an artist of Baumbach’s caliber. Still, don’t miss the closing credits — there’s a production number with a banger of an original song by LCD Soundsystem (the band’s new first work in five years) that will send you out on that elusive high that the film’s finale never quite reaches.