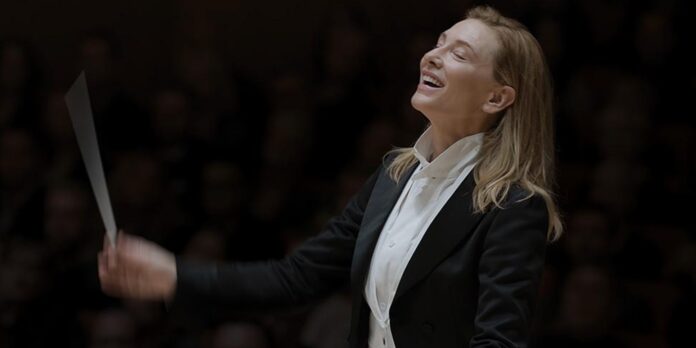 ​​Todd Field doesn’t make easy movies. In his 2001 debut, “In the Bedroom,” he uncomfortably tightens his narrative vice in capturing how a family tragedy can prompt its members to turn on one another. And in his unsettling sophomore effort, 2006’s “Little Children,” he reveals the dark sexual desires lurking within a quiet, upstanding community. Challenging films both, but ones that garnered such critical acclaim that they only whetted the appetite of his fans for his inevitable next big film.

For over 15 years, that big announcement never came. Sure, there’s been a blurb now and then about one project or another, but none for Field had ever come to fruition. One began to wonder that we might never get another film from Todd Field.

Field’s sprawling 158-minute character study of Lydia Tár (Cate Blanchett), the world’s premier female orchestra conductor, begins with a day-in-the-life kind of simplicity but soon evolves into something deeper and far more revealing. Take the film’s opening sequence. Ostensibly, Lydia’s lengthy on-stage interview with The New Yorker‘s Adam Gopnik is designed to provide us with a quick tutorial on her cultural importance to the world. But so much more than biography is revealed in these scenes. Blanchett’s line readings to Lydia’s responses, for example, reveal a woman so in control that her well-rehearsed responses can come off as genuinely spontaneous ones. And watch Blanchett in her physicality. Every twitch, arm gesture, and leg movement reveals that she knows she’s the boss here, a character attribute that also carries over to her private life.

Though the toast of the NPR crowd in America, Lydia’s home base is Germany, where she lives with her wife Sharon (Nina Hoss), who serves as the first violinist in the Berlin Philharmonic, the symphony orchestra which Lydia leads. Mentored early in her career by Leonard Bernstein, Lydia shares her mentor’s love of finding the composer’s intentions through the emotions in the music and has little patience for those caring about anything other than that. In class, she even dismisses a BIPOC transgender student (Zethphan Smith-Gneist) who has no use for Bach because of the cis white composer’s sexual promiscuity with women.

Ironically, Lydia is no slouch in the promiscuity department either. In her past lies a number of young women she has used and even rewarded with promotions before someone new catches her eye, and Lydia moves on. In fact, one such woman is even threatening to expose Lydia’s past to the press, a quick reference early on that only becomes more ominous as the film progresses. But dismissing “TÁR” as merely a film about sexual harassment is to miss how Field uses the issue as the blindspot in Lydia’s mind that becomes the crack that shatters the formidable facade she has erected to hide the true identity of the person within.

If Lydia is exacting in what she expects from her art, Field is as well. By design, “TÁR” is a cold film, shot in a palette of blue and greys that may reflect its heroine’s lack of empathy toward almost everyone in her life except her beloved adopted daughter Petra (Mila Bogojevic), whom she parents with Sharon. To Lydia, everyone else — her devoted assistant Francesca (Noémie Merlant); new paramour and Russian cellist Olga Metkina (Sophie Kauer); and even her wife Sharon — are in Lydia’s circle as long as they are of use to her, with the emotional damage she inflects on them of little concern to the artist.

Given the multitude of contradictions struggling in the single psyche of Lydia Tár, can you think of any other contemporary actress who can not only embrace them all but even suggest new ones? Blanchett has demonstrated time and again her unparalleled talent for offering nuance and subtle shading to her characters as she pulls back the layers of the onion to display the inner character. Clearly, Lydia Tár is an absolute monster of a role, and Blanchett is utterly triumphant in it. It’s a performance about which audiences will be discussing in the same breath as Robert De Niro’s in “Raging Bull,” and indeed, for Cate Blanchett, Lydia Tár is her Jake LaMotta.

Dominant as she is, Cate isn’t the whole show. There’s a terrific performance by Hoss as Lydia’s wife and a great piece of character work by Mark Strong as a wannabe conductor who becomes the victim of Lydia’s most shocking act of aggression. In a film where sound is a crucial element, the design here is spectacular in its detail, and there’s yet another great score by Oscar winner Hildur Guðnadóttir.

“TÁR” marks Field’s debut as an original screenwriter, and he takes his vision as far as he can go, creating characters that jump off the page and conjuring dialogue for them that’s both precise and revelatory at the same time. Sixteen years is far too long to wait for another visit, Mr. Field, so please come back much sooner and bring another script as good as “TÁR’s” along with you while you’re at it. We could all use it.

<b>THE GOOD - </b>Todd Field returns after 16 years with a stunning piece of work focusing on an accomplished woman whose brilliance is finally brought down by her own inappropriate hubris. Cate Blanchett is triumphant in the title role, delivering a performance about which audiences will still be talking years from now.<br><br> <b>THE BAD - </b>Field's choice to make the film appear cold with its chilly palate and unlikeable lead may turn off some audiences.<br><br> <b>THE OSCARS - </b><br><br> <b>THE FINAL SCORE - </b>9/10<br><br>"TÁR"