Forgotten Awards Season Contenders That Could Re-Enter The Conversation 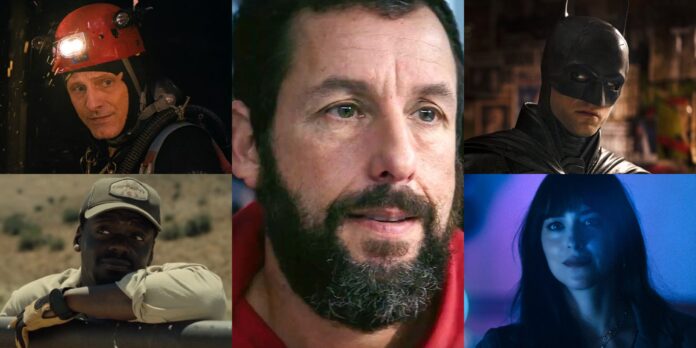 Every year when we get beyond the fall film festivals, there is a list of movies that tend to dominate the Oscar conversation and push everything else that came before earlier in the year out of everyone’s consciousness. This is especially true once we get to the precursors. Films like “The Fabelmans,” “The Banshees Of Inisherin,” “Women Talking,” “TÁR,” “Everything Everywhere All At Once” and “Top Gun: Maverick” are likely here to stay. These critically acclaimed films are the ones that will continually be mentioned by various critics’ groups, thus solidifying them as sure-fire Oscar contenders in our minds. By the time we get deeper into the season, we’ve typically all but forgotten about another set of movies that were flying under our noses the whole the time. They tend to be more populist, geared towards the industry, specifically Oscar voters and are mostly ignored by the critics for any number of reasons. Maybe they were released too early in the year. Perhaps they were seen as “light” or not “awards worthy” when it was so early in the year, and not everything had been seen by that point. But at this stage, when once would-be contenders have lost steam or are struggling to build momentum alongside the films which are looking more solid for an Oscar nomination, this other group of films are strategically lying in wait, ready to strike when the time is right, gain guild support at the last minute and receive an Oscar nomination over other perceived favorites. Some recent examples include surprising nominations and in some cases wins for “The Blind Side,” “Extremely Loud And Incredibly Close,” “A Better Life,” “Flight,” “American Sniper,” “Florence Foster Jenkins,” “My Octopus Teacher,” and many others. So what are the films this year that are almost forgotten but the studios are doing their best to keep them in voters’ minds?

Hustle
The beloved sports drama from “We The Animals” director Jeremiah Zagar quietly came and went at the beginning of the summer on the Netflix platform, but its lead star and producer, Adam Sandler, received really strong reviews for his performance as a basketball scout looking to get an unknown basketball player from Spain (Juancho Hernangómez) a shot in the NBA. One of the recurring themes amongst these films is that they’re crowdpleasers that hit familiar beats in their storytelling but do so in a practically irresistible manner. When Sandler decides to drop his comedic persona and tap into his inner dramatic work, magic traditionally occurs. He’s proven himself over the years to be a dynamic actor when he decides to be. On the heels of his greatest performance yet in the Safdie Brothers’ “Uncut Gems,” it’s clear there’s a newfound confidence that previously may not have existed before allowing him to deliver yet another layered, likable performance so soon. No one is saying “Hustle” will be competing for anything outside of Sandler in the Best Actor category. Still, considering how open the category currently is, with a big IOU from the Academy for his overlooked performance in “Uncut Gems” and with Netflix running a campaign for him, there’s a shot he could pop up as a surprise. The film currently sits on Rotten Tomatoes with a 93% critical and audience score. Not too shabby.

Thirteen Lives
Next up is Academy Award-winner Ron Howard’s “Thirteen Lives.” A film that received some of the best test screening scores in MGM’s history, it was curiously dumped on Prime Video in August before the fall film festivals and seemed to fade into obscurity. That is, until the other night. I attended an Academy screening in New York where Amazon Studios made it clear to me that they were not giving up on the film and were going to go all out for it, have Howard and his cast and crew attend as many screenings as they could schedule and specifically target awards voters by highlighting the film’s crafts, mainly Cinematography, Editing, Production Design (the caves are all re-created sets) and Sound. It’s one thing to say you’re going to do all of these things, and then I remembered the film is currently sitting on Rotten Tomatoes with an 86% critical and 95% audience score, and the audience I saw it with the other night really loved it. Almost all the voters I spoke to had not seen “The Rescue” beforehand, which was something I indicated in my review could be key to the film’s success, and that appears to be the case as there was enthusiastic applause and tears at the end of the screening. I would never expect to see this film winning prizes from the New York Film Critics Circle or the National Society Of Film Critics, but a guild mention or two? Sure. And who knows where that might lead if it continues to rebuild momentum.

Cha Cha Real Smooth
Another film is quietly holding screenings with various groups, hoping to remind voters that it was the talk of this year’s Sundance Film Festival, where it won the Audience Award for U.S. Dramatic Competition. Cooper Raif’s second directorial feature film, “Cha Cha Real Smooth,” was warmly embraced by critics, and Apple is certainly not abandoning it. Where could such optimism land it in the awards conversation? A Best Supporting Actress play for Dakota Johnson and Best Original Screenplay for Raif seem like the smartest ones to go for, but oddly enough, the film doesn’t have the strongest reception one might expect. It currently sits at 86% critical and 61% audience score on Rotten Tomatoes, so maybe this one won’t be so smooth after all. Though, Apple did just work wonders for another little Sundance title last year called “CODA,” which went on to do fairly well for itself at the Oscars, so who knows?

The Bad Guys
While everyone is discussing “Guillermo del Toro’s Pinocchio,” “Strange World,” “Marcel The Shell With Shoes On,” “Turning Red,” “Lightyear” or “My Father’s Dragon,” there’s another animated film that came out all the way back in April earlier this year which could easily find itself amongst the five nominees for Best Animated Feature: “The Bad Guys.” With nearly $250 million in the bank, an 88% critical and 93% audience rating on Rotten Tomatoes, and Dreamworks Animation Studios leading the campaign, this was one of the first films of the season to get its screener out to voters. With memorable characters, a fun style, and serving as a homage to heist crime thrillers, “The Bad Guys” might have the goods to outweigh the bad and score a Best Animated Feature Oscar nomination.

The Batman
While “Elvis” is sucking up all of the air in the room for Warner Bros. on the back of Austin Butler’s tremendous lead performance, we shouldn’t forget the studio had another film released earlier this year which still stands as one of the highest grossing films of the year, has a sturdy 85% critical and 87% audience rating from Rotten Tomatoes and features the Academy’s favorite superhero. More so than Iron Man, Spider-Man, and Superman, Batman has received the most Oscar nominations for his movies in the Academy’s history, with sixteen winning four. Christopher Nolan’s “The Dark Knight” received eight of those Oscar nominations, won two awards, including Best Supporting Actor for Heath Ledger, and almost received a Best Picture nomination. Its miss in that category created an outcry so loud it forced the Academy to extend the number of Best Picture nominees for the first time in decades in the years that followed. While Matt Reeves’ “The Batman” may not be as big of a cultural phenomenon, it still received enough acclaim and respect that its below-the-line talent could easily be recognized come Oscar time should Warner Bros. choose to share the spotlight a bit with “Elvis.” Among them are former Oscar winners cinematographer Grieg Fraser (“Dune“) and composer Michael Giacchino (“Up”), along with the Oscar-nominated sound and makeup teams. Will the caped crusader show up at the Oscars again this year?

Nope
Jordan Peele’s feature directorial debut, “Get Out,” was a box-office hit and instantly became a classic. The Academy would go on to give the film four Oscar nominations, including Best Picture, with a win for Best Original Screenplay. Peele’s follow-up film “Us” disappointed some but still had enough critical adoration to propel its star Lupita N’yongo into the Best Actress conversation. Despite receiving Critics Choice and SAG nominations for her work (along with a ton of precursor wins), she came up short on nomination morning, most likely due to the Academy’s still weird aversion towards the horror genre in most cases. Peele’s third feature, “Nope,” is easily his most ambitious to date, with a higher display of scale than he’s previously given us with awe-inspiring (and terrifying) visual effects and sound work. The film’s haunting soundscape, coupled with Michael Abels’ genre-bending score, should find themselves in the Oscar conversation if critics decide to show as much love towards “Nope” as they did “Get Out” and “Us.” Also, don’t forget the IMAX photography by Oscar-nominee Hoyte van Hoytema. Such large-scale visuals are sure to have made an impression on some voters and will be on their minds when they fill out their ballots for the best camerawork of the year. Universal may have their hands full this year with “The Fabelmans” and “She Said,” but between this and some specific nominations they’re looking for with “Bros” and some of their animated titles, the studio has a well-rounded slate that could find attention throughout the season.

Other possibilities include craft nominations for Robert Eggers’ “The Northman” and Best Animated Feature for “Marcel The Shell With Shoes On.” What’s an Oscar contender you think is flying under the radar, possibly towards a nomination without many realizing it? Do any of these films stand a chance of still receiving a nomination? Please let us know in the comments section below or on our Twitter account, and be sure to check out our latest Oscar predictions here.