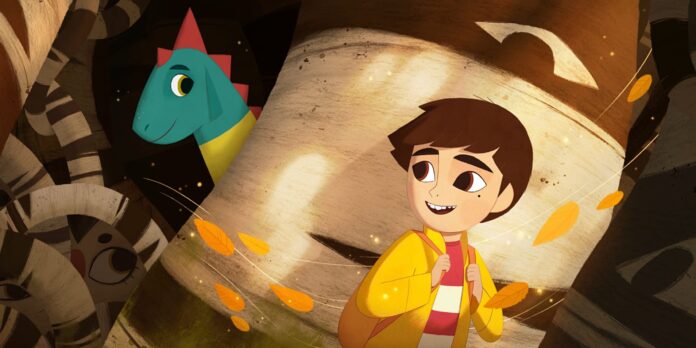 THE STORY – Elmer, who is having trouble adjusting to his new life, decides to set out to find a wild island and rescue a young dragon. His adventures will lead him to encounter ferocious beasts, discover a mysterious place and make a new friendship.

Irish animation studio Cartoon Saloon has been slowly but steadily carving out its own remarkable section in the animation world. They have a nearly unbeatable record of feature films, including “The Secret of Kells,” “Song of the Sea,” “The Breadwinner,” and “Wolfwalkers.” Each of their critically acclaimed films received nominations for Best Animated Feature, a streak that is sure to continue with Netflix’s “My Father’s Dragon.” Full of whimsy and melancholy, this stunningly animated coming-of-age tale based on the 1948 children’s novel of the same name by Ruth Stiles Gannett is as entertaining as it is moving.

“My Father’s Dragon” follows a young boy named Elmer (Jacob Tremblay). When the store he ran with his mother (Golshifteh Farahani) is foreclosed upon, they’re forced to move to a gloomy city called Nevergreen. Broke and without many options, Elmer watches fear and sorrow creep into his mother’s soul. The boy is scared and wants to fix it all himself. After encountering a talking cat (Whoopi Goldberg) who tells him of a dragon who could help, Elmer leaves for Wild Island, a mysterious place full of wild animals and, yes, a dragon named Boris (Gaten Matarazzo). Together, Elmer and Boris must overcome fear and save the Island before Elmer can return home to his mother.

Written by Meg LeFauve and directed by Nora Twomey, “My Father’s Dragon” doesn’t skimp on challenging themes, even for a film that’s clearly aimed at a young audience. Sure, there are talking animals, a silly dragon, and no shortage of cute characters, but the depth of the story matches the cuteness. While watching his mother struggle to pay the rent and turn their misfortune around, Elmer’s fear and anger turn into a need to fix everything all by himself. This continues on Wild Island which is facing destruction as it sinks into the ocean and as Boris tries to become an after-dragon by saving the Island. Elmer puts on a brave face, fighting to solve all the problems life is throwing at home, whether he knows the answers or not. He’s full of guilt and determination, carrying the weight of the world on his shoulders even though he’s just a kid. The phenomenal writing helps these fairly adult themes resonate strongly.

Of course, the animation by Cartoon Saloon helps the story soar as well. Filled with liveliness, color, and characters that pop off the screen, it’s the most gorgeously animated film of the year. There’s a unique storybook aspect to Cartoon Saloon’s animation style that is consistently vibrant, tactile, rich, and perfectly detailed. There’s really nothing else like it in the industry today. Such style is the perfect fit for this type of story, which relies on the imaginative quality of Elmer’s journey.

The story is also vividly brought to life by the flawless vocal performances of the cast. Tremblay (who remains a reliable casting call for the animation realm after stellar work on Pixar’s “Luca“), Farahani, and Ian McShane as a gorilla all deliver outstanding performances that feel perfectly suited to their characters, but it’s Matarazzo’s performance as Boris, the dragon, that is the film’s true highlight. His infectious, bright laughter gives so much energy to the youthful, silly dragon, making the character so much fun for kids and amusing for adults. Yet he also fills Boris with an aching desire to be the dragon he’s meant to be. When failure seems inevitable for Elmer and Boris, the dragon emotionally breaks down, claiming, “The truth is I couldn’t do it anyway. That’s what I really feel at the pit of my stomach.” Matarazzo’s pitch-perfect delivery of these lines is heartbreaking. It continues to show his incredible range as a performer while highlighting screenwriter Meg LeFauve’s beautiful writing and director Nora Twomey’s heartfelt direction.

Though the original novel “My Father’s Dragon” was released much earlier, the story this Netflix animated film takes on is reminiscent of “Where The Wild Things Are.” There’s a reason these kinds of stories continue to work: a child’s imagination creates a coping mechanism for escaping to a fantastical world of creatures to deal with life’s more troubling problems as they grow into adulthood. The themes are familiar, but they still hold tremendous power for children and adults. “My Father’s Dragon” is another fun family adventure from Cartoon Saloon, who are not afraid to balance mature themes with animation geared towards kids. Such fine-tuned storytelling makes it destined to be a classic, just like the original novel, ensuring that its life lessons will still be passed on from generation to generation.