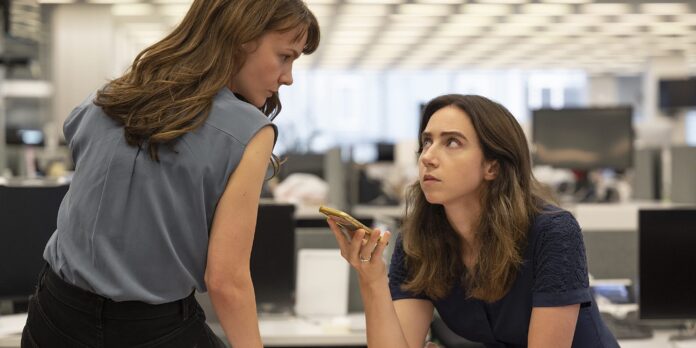 THE STORY – The New York Times journalists Megan Twohey and Jodi Kantor publish a report that exposes sexual abuse allegations against powerful Hollywood producer Harvey Weinstein. The shocking story also serves as a launching pad for the #MeToo movement, shattering decades of silence around the subject of sexual assault and harassment.

In what was the biggest open secret in Hollywood, Harvey Weinstein, the once-powerful producer, and executive, committed numerous acts of sexual harassment, including rape, involving actresses, co-workers, employees, and others spanning 40 years. He continued to stay in power until New York Times journalists Jodi Kantor and Megan Twohey, along with some incredibly brave women, finally came together to bring him down in 2017.

It’s a story nearly everyone in the industry knows of today, as the effects of Weinstein’s downfall reverberated throughout Hollywood and the entire world through the #MeToo movement, bringing about a tidal wave of change in the workplace for protection against sexual harassment. It was a long overdue movement that failed to get off the ground in the past when others came forward due to fear and systems in power built to protect those at the top. Twohey and Kantor’s 2017 Pulitzer Prize-winning story for The New York Times (and the New Yorker) would be recapped in their 2019 book “She Said: Breaking the Sexual Harassment Story That Helped Ignite a Movement,” which has now been made into a feature film by the same industry that failed to take Weinstein down. It’s a story pretty much everyone in the industry knows by this point. Protected by systems of power and using various forms of intimidation, including nondisclosure agreements and threats of destroying careers within the industry, Weinstein was eventually brought down by hard-earned journalism and the courageous stories told by his victims. It was only a matter of time before the story would be made into a movie. While I do not think anyone expected it would be made in less than five years, there’s no denying Hollywood loves to pat itself on the back whenever it can find an opportunity to do so.

Discussing how she can convince a terrified source to come forward on the record for a story, Megan (Carey Mulligan) tells them, “I can’t change what happened to you in the past, but together we may be able to help protect other people.” And although there was a more significant impact brought about by this story’s publishing that has resulted in plenty of positive change, this should not suggest to anyone that the issue of sexual harassment or corrupt systems of power, which are still being upheld to protect abusers, has gone away. Screenwriter Rebecca Lenkiewicz (“Disobedience” and “Colette“) well-researched screenplay ends the story on the satisfying note of the story’s publication (Harvey’s arrest and prison sentence is communicated via text before the credits), celebrating the power of journalism, of women coming forward with their truths, and, most importantly, being believed and having abusers held accountable.

The lead-up to the film’s triumphant ending is, at times, a riveting one as we see in great detail the lengths Megan and Jodi (Zoe Kazan) have to go to piece together the story of Weinstein’s crimes. Even in the fallout of sexual harassment scandals involving then-Republican presidential nominee Donald Trump and former Fox News correspondent Bill O’Reilly, many of Weinstein’s victims are too scared to come forward. The NDAs put in place by Weinstein and his team are tough for anyone to get around legally, but Megan and Jodi keep digging. They keep pushing, and it’s in these scenes that we see their tenacity, intelligence, and compassion shine through. Both Mulligan and Kazan deliver solid performances that radiate these qualities and expertly balance their characters’ struggles at home. Whether it’s Megan dealing with postpartum depression following the birth of her first child (with her husband played by Tom Pelphrey), or Jodi stumbling to find the right words to communicate to her young daughter the nature of the story she’s working on, Mulligan and Kazan elevate the screenplay through their fine emotional work and sense of camaraderie their characters develop the deeper they go into the story. Mulligan definitely has the flashier role of the two as her character is afforded several frustrated outbursts and one particularly memorable moment when she loudly tells a man off at a bar for trying to hit on her after repeatedly telling him no. Her scene with Peter Friedman (from HBO’s “Succession“), who plays an associate of Weinstein’s, is another highlight as she uses her intellect and confidence to pry more information out of him, which could lead to the story having more credibility.

Supporting performances from Patricia Clarkson as The New York Times editor Rebecca Corbett and Andre Braugher as the no-nonsense executive editor Dean Baquet are welcome but not given nearly enough to do. While many women are name-dropped in the film, including actresses Gwyneth Paltrow (who we never hear or see) and Rose McGowan (who we only hear through a phone conversation), it’s Jennifer Ehle as Laura Madden, Angela Yeoh as Rowena Chiu, Samantha Morton as Zelda Perkins and Ashley Judd (who was the most famous actress to initially come forward when the story broke) playing herself who are the beating heart of the film. They’re responsible for its most gut-wrenching scenes as they recount their encounters with Weinstein (which are never shown) using re-enactments with younger actresses (we never see Weinstein’s face, we only hear his voice or see him from a side profile angle). One such powerful moment involves listening to the chilling audio of Weinstein attempting to lure in and assault Ambra Gutierrez (who we never see but only hear through the recording) while only concentrating on empty shots of the hotel hallway where the interaction took place. Morton makes the most of her one scene as a former assistant at the London office — Weinstein’s crimes were far-reaching — to leave a lasting impression, and Judd’s presence adds another unexpected level of authenticity to the film. If that hits too close to home for some in Hollywood who were complicit in Weinstein’s wrongdoings, then so be it.

“She Said” does not pull back any punches in calling out the people and systems that protected Weinstein for so many years. It’s an honest and respectful film that is elevated by its performances and diving into the kind of investigative reporting that can make a difference in the world. Nicholas Britell provides beautifully layered, if a bit forgettable, string work that gives the film a somber tone and then sweeps us in its more dramatic moments. At times, “She Said” can feel like a combination of “Bombshell” and “Spotlight.” It’s never as bad as the former, as it strikes a far more consistently serious and authentic tone, but it’s never as great as the latter, as it struggles to find a smooth editing groove over the course of its 135-minute runtime. Even as it clocks in at over two hours, “She Said” feels like it’s missing individual character arcs for Jodi and Megan as their lives at home are brushed aside in favor of the back half of the film, focusing on finishing the story and publishing it before it loses its potency, or worse, Weinstein kills it. You can sense the earnest, heartfelt desire to correctly tell this still very recent story from Schrader and Lenkiewicz. Given how sensitive the subject matter is for millions of women around the world who have been impacted by sexual harassment or assault, they manage to pull it off with a vital telling that continues to have an impact across the world to this day.