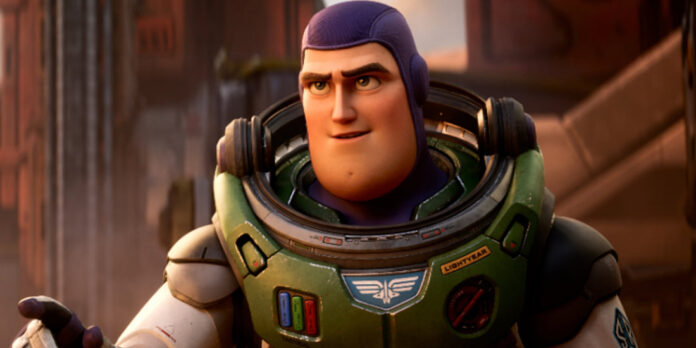 THE STORY – A sci-fi action adventure and the definitive origin story of Buzz Lightyear, the hero who inspired the toy, Lightyear follows the legendary Space Ranger after he’s marooned on a hostile planet 4.2 million light-years from Earth alongside his commander and their crew. As Buzz tries to find a way back home through space and time, he’s joined by a group of ambitious recruits and his charming robot companion cat, Sox. Complicating matters and threatening the mission is the arrival of Zurg, an imposing presence with an army of ruthless robots and a mysterious agenda.
​
THE CAST – Chris Evans, Keke Palmer, Peter Sohn, James Brolin, Taika Waititi, Dale Soules, Uzo Aduba, Mary McDonald-Lewis, Efren Ramirez & Isiah Whitlock Jr.
​
THE TEAM – Angus MacLane (Director/Writer) & Jason Headley (Writer)​
​
THE RUNNING TIME – 105 Minutes

​​After twenty-seven years, Pixar still can’t quit the “Toy Story” franchise. The animation powerhouse has returned yet again to their bread and butter, but this time with a twist. “Lightyear” is no “Toy Story” sequel, nor is it a prequel or even really a spinoff. It’s something else entirely different; an explainer of sorts, bringing us the film that a young Andy watched and fell in love with Buzz Lightyear, the character. It’s the film that inspired the creation of the toy, which inspired a whole beloved movie franchise – or something like that. It’s best not to get too hung up on the details and simply kick back and enjoy “Lightyear” for what it is, an action-adventure space film with likable characters and tons of humor.

Aboard their exploration vessel nicknamed “the Turnip,” the Space Rangers approach a potentially resource-rich planet. One particular space Ranger named Buzz Lightyear (voiced by Chris Evans rather than Tim Allen), along with his commander Alisha Hawthorne (Uzo Aduba), disembark to investigate the planet. Quickly, the crew finds themselves under a deadly attack from swarming bug-like aliens and their overly aggressive vines. On the run, Buzz tries to take control to save the day, refusing help from his team. As one might guess, he fails, sending the Turnip crashing back to the planet and marooning the crew of thousands. Now, they must develop a new hyperspeed crystal to leave the planet. The problem? Every moment Buzz spends in space trying to finish the mission, time accelerates for those back on the planet, leaving Buzz only a few minutes older while everyone else has aged years beyond him.

Directed by Angus Maclane (co-director of “Finding Dory“), “Lightyear” is Pixar’s first true dive into the world of science fiction – and they’re leaning right into the genre. Equal parts “Star Wars,” “Interstellar,” “The Martian,” and, well, “Toy Story,” “Lightyear” functions as an excellent entry point for kids too young for more adult sci-fi films. There are aliens, terraforming, and plenty of robots to be found as we follow a character we have a pre-existing attachment with. The story is surprisingly high-concept, with a good chunk of the film centering around time dilation, which can be a heavy topic for an animated movie geared towards children. Mature as some of these elements might be, they’re handled well in the context of the story, even if, at times, it gets perhaps too confusing for its own good. While the film is still very much for children, seeing Pixar commit to a different genre feels fresh and gives “Lightyear” an exciting sense of momentum.
​
The film primarily prioritizes action first and foremost above its storytelling. Buzz is a certified action hero, or at least a hero in the making, as he still has much to learn about himself as the film’s story progresses. He and a crew of misfits must battle against a mysterious alien force, unprepared and in desperate need of training from the Space Ranger, who is typically more comfortable handling such matters on his own. There are a number of action sequences, fight scenes, and thrilling flights through space which give “Lightyear” a quick pace that never seems to let up. However, this non-stop action comes at the cost of almost everything else the critically acclaimed animation studio usually gets right. There isn’t much of an emotional story to keep the audience invested, as much of it feels too familiar and not nearly as profound as it should’ve been. It’s pretty enjoyable to see these quirky and funny characters on an epic space adventure across time, but the film rarely prioritizes heart over action. The very motivations of the story itself are relatively muddy and never cleared up, especially when a third-act twist involving the evil emperor Zurg (voiced by James Brolin) gets introduced, leaving the audience in a state of confusion than in a state of wonder.

Still, if anything can get you to overlook its mediocre story, it’s Sox, Buzz’s scene-stealing robot cat companion. Brilliantly voiced by Peter Sohn, Sox is one of the most adorable and hilarious characters Pixar has ever put on screen and is sure to be an instant hit with audiences. Alongside Sox are Alisha’s granddaughter Izzy (Keke Palmer), ex-convict Darby (Dale Soules), and the bumbling nervous Mo (Taika Waititi), who join Buzz on his seemingly impossible mission to rescue everyone on the planet and send them back home. Because Buzz is thrown into this story quickly, there’s not much in the way of character development for him as he retains and even recites many of the lines and personality idiosyncrasies Tim Allen introduced in the original “Toy Story” films. Though the film is built to flesh out this iconic hero, he’s a somewhat bland character compared to the rest of his team. However, Evans is used to this square-jawed type of good-guy character (he was Captain America, after all), as he comfortably fits in the role, never fully impersonating Allen but making the character all his own. Some strange choices made in the third act are intended to bring more depth to this iconic character, but the script and Maclane don’t ever fully make it all work, leaving us with a character who has a clear sense of purpose but a film still struggling to find one to justify its own existence.

Thankfully, the thrilling action of “Lightyear,” its characters and humor is enough to make up for the lackluster story. The gorgeous animation makes every laser beam or explosion a marvelous sight to behold as Pixar delivers one of their most visually stunning films yet. It’s no surprise that six-year-old Andy would be blown away by such incredible imagery, which would inspire him and the rest of the world to fall in love with a sometimes goofy but honest and capable hero who stands for the proper morals needed in society. As a result, today’s younger generation will likely have a similar experience giving more life to a franchise that has found ways to endure for nearly thirty years. “Lightyear” is the most exciting adventure of the summer, one that the whole family will enjoy to infinity and beyond.

Powered by JustWatch
Share
Facebook
Twitter
Copy URL
Previous article
The Next Best Picture Podcast: Episode 298 – Oscar Contenders From The First Half Of 2022 & The “Black Adam” Trailer
Next article
“POSER”