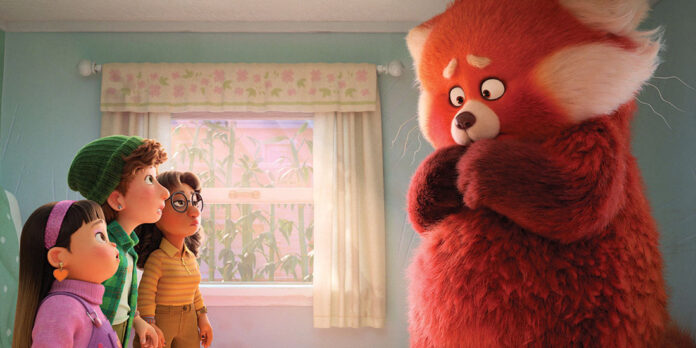 THE STORY – Mei Lee is a 13-year-old girl who is torn between being her mother’s obedient daughter and the chaos of her youth. As if that were not enough, when she gets too excited, she turns into a big red panda.
​
THE CAST – Rosalie Chiang, Sandra Oh, Ava Morse, Maitreyi Ramakrishnan, Hyein Park, Orion Lee, Wai Ching Ho & James Hong
​
THE TEAM – Domee Shi (Director/Writer) & Julia Cho (Writer)​
​
THE RUNNING TIME – 99 Minutes

​​Coming-of-age films are a sweet spot for Disney Pixar. “Inside Out” focused on our emotions and how we deal with them as we grow up. “Coco” explored death, family, and culture. Just last year, Pixar brought us “Luca,” which explored how our young friendships make a permanent impact on us. While the genre may be well-worn by the animation studio, none of their films have tackled adolescence as directly as “Turning Red.” It may not be the strongest of Pixar’s lineup, but it’s an insightful and sentimental story of a young girl’s reluctant journey through the monster that is puberty. It’s also a blast of energy, full of joy, honesty, and plenty of hormones.

Mei (voiced by Rosalie Chiang) is a confident, energetic 13-year-old living in Toronto, and she’s got life figured out. She’s got a great group of friends, she helps out in her parent’s temple, and she’s got a mild obsession with the greatest boy band of all time, 4*Town. Naturally, things inside Mei start to change, like developing her first crush for the geeky kid behind the counter at a convenience store. As these feelings present themselves through endless doodles of the boy she likes, Mei begins to clash with her mother (Sandra Oh), who humiliates Mei in front of her crush. And in a show of perfect timing, that’s when puberty hits her full-on. Mei wakes up as a literal giant red panda, smashing her way around her room.

The metaphor conveyed in Domee Shi, and Julia Cho’s screenplay is pretty thinly veiled. In fact, when Mei’s parents realize something’s happened, they think that Mei’s gotten her first period. While this may be the first time a Pixar animated film has featured pads and a conversation around menstruation, it’s refreshing to see such frank topics mentioned, albeit briefly. Still, the red panda represents more than that. It’s Mei hitting puberty and experiencing all the physical and emotional highs and lows that go along with it which gives “Turning Red” its universal power for a broad audience.

This is by far the biggest strength of “Turning Red.” We’re used to seeing animated films with a universal message that kids can understand while featuring emotional themes that will resonate with adults, but “Turning Red” aims its sights directly at pre-teens in a helpful way. Mei is such a relatable character all along her journey. Who didn’t feel mortified when their parents discovered we had an early crush? Who didn’t feel self-conscious about their changing body as a teenager? While none of us have ever dealt with turning into a giant red furry creature, this story brings so much truth about adolescence, especially for teenage girls.

Domee Shi’s feature directorial debut also features an early 2000s animation style with anime touches and is bursting with energy from beginning to end. Billie Eilish and Finneas O’Connell wrote the music tracks for 4*Town that gives this 90s kid a flashback to music videos that would loop on Disney Channel back in the day. The single from the film, “Nobody Like U,” is a certified bop sung by Jordan Fisher. The animation style brings plenty of throwback flair, too, departing from what we expect from Pixar in both good ways and bad. With crash zooms and dutch angles, much of the CGI animation is accentuated with seemingly hand-drawn elements. It’s much more cartoonish than expected, but it works well within the framework of the story being told.

As Mei wrestles with accepting who she’s becoming, her mother tries to help her see that it’s better to throw away the parts that make her original in order to conform. This is what it takes to be proper and to fit in. Instead, Mei tries to find the right balance of accepting herself while not letting her emotions get the best of her. Much like “Encanto,” “Turning Red” wrestles with family who prefers order and perfection as a way of preservation and how to challenge those relationships without losing the people you love. While Pixar’s latest may not pack as hard of an emotional punch, it’s still a very sweet and satisfying film. Ultimately, it’s one of the best films about puberty ever made and a wonderful movie in its own right, one that is an easy recommendation for anyone when it hits DIsney+ later this week.