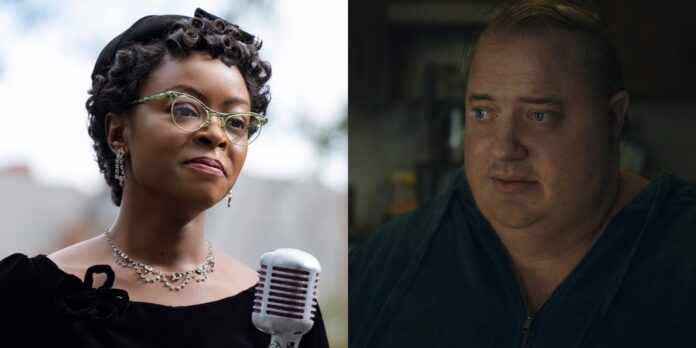 After “CODA” shattered a few decades-old stats to win Best Picture last year, statistics and historical trends may not be entirely trusted this year. Nevertheless, there are trends and droughts this year that could be a factor for not one, but two candidates in the lead acting races, depending on how strong “The Whale’s” Brendan Fraser and “Till’s” Danielle Deadwyler really are and if their movies can’t ride their coattails. Fraser has been the undisputed leader for Best Actor since the fall film festivals, yet “The Whale” remains squarely on the Best Picture bubble and could stay there right up until nomination morning. As for Deadwyler, she has charged into the Best Actress conversation after “Till’s” recent release and could well be a passion pick even against the likes of Cate Blanchett, Michelle Yeoh, Michelle Williams, and Margot Robbie – yet might still be the sole nominee for “Till” as a whole.

Despite Fraser’s raves, a comeback story, and a relatively weak Best Actor field, his biggest obstacle could be a Best Picture snub for “The Whale,” as no Best Actor winner has won for a non-Best Picture nominated film since Jeff Bridges for “Crazy Heart” in 2009. As for Deadwyler, if “Till” doesn’t get another nomination, she would have to become only the third Best Actress winner of this century to win as her film’s sole nominee, joining Charlize Theron for “Monster” in 2003 and Julianne Moore for “Still Alice” in 2014. Add in the fact that “Till” is struggling at the box office despite high audience scores, A24 is holding their cards close to the chest in regards to “The Whale’s” marketing, stiff competition in both categories and the two contenders both have an uphill battle ahead of them.

Despite a 98% Tomatometer score, “Till” is a long shot at the moment for nominations in Best Picture, Best Original Screenplay, and Best Original Song and does not appear to be a likely factor in any other category. And unlike Marion Cotillard in 2007, Meryl Streep in 2011, Renee Zellweger in 2019, and Jessica Chastain last year, Deadwyler’s physical transformation likely won’t yield a Best Makeup & Hairstyling nomination as a safety net. So unless a few Best Picture bubble films drop off, and perhaps unless “Till” shifts into the more wide open Best Adapted Screenplay category, Deadwyler would stand alone as “Till’s” sole nominee if she gets in at all.

“The Whale” would seem to have much more support for Fraser since a Best Adapted Screenplay nomination appears likely, and Hong Chau could very well be a significant Best Supporting Actress contender herself. Those additional nominees could well give the movie the boost it needs to reach Best Picture, and if it gets there, Fraser’s victory might be secured then and there. But between its rather low 71% Tomatometer score and 7.1 Rotten Tomatoes average rating, lingering controversies about Fraser’s fat suit and possible “fatphobic” content, and the potential for even more divisive reactions once general audiences see it (It’s 38 days until its theatrical release and there still has not been a trailer from A24), this movie could honestly go either way. There is a very real scenario where “The Whale” could be a truly serious late threat to win it all like “CODA” did if it wins for Best Adapted Screenplay and/or for Chau along with Fraser. But there is also a possible scenario where “The Whale” completely misses the Best Picture cut and drags Fraser to defeat along with it – depending on whether “Elvis” makes it into the Best Picture lineup instead and boosts up Austin Butler or whether “The Banshees Of Inisherin” is a serious enough Best Picture threat to help push Colin Farrell towards an Oscar win.

Regardless, unless “The Whale” sinks completely in the next few months, Fraser should remain the Best Actor favorite by the time nominations come in. But if his movie misses the Best Picture cut, that 13-year-old stat will become a massive subplot in the last weeks of the race. Likewise, suppose Deadwyler makes the Best Actress field, and “Till” still gets snubbed everywhere else. In that case, she will be a solo nominee completely dismissed as a potential winner, at least until and unless she wins something big. In these scenarios, the next step would be to analyze if Fraser and Deadwyler have the kind of performances, narratives, and potential momentum to shatter recent history, like “CODA” ultimately did. In some contexts, they both have the advantages of overcoming it, while the task may look more daunting in others.

For Fraser, he might be trying to do something no one has done since Bridges, yet Bridges had a lot more than a Best Picture nomination on his side in 2009. Like many before and since, Bridges had the “overdue” narrative on his side, as the desire to see him accept an Oscar at last drowned out any other concerns about his movie. But since “Crazy Heart” also won Best Original Song and got Maggie Gyllenhaal a last-second Best Supporting Actress nomination, that gave Bridges enough extra support from his film even if it still missed Best Picture. “The Whale’s” potential additional nominations for screenplay and Chau could work the same way, regardless of how Best Picture shakes out. Of course, Fraser doesn’t have Bridges’ long career and multiple past nominations to make him the “overdue” candidate. But Fraser is riding a major career comeback, has received tears and standing ovations at pretty much every film festival appearance, and has very Academy-friendly prosthetics, even if not all of this community agrees. As such, like Bridges before him, Fraser may have far too much goodwill for any Best Picture snub and historic stat to count against him.

Deadwyler’s obstacles might be more daunting, even if there’s slightly more precedent in this century for a sole nominee to win Best Actress. If not for the Best Makeup & Hairstyling category alone, there would have been a lot more recent examples than just Theron and Moore. But Theron and Moore had other advantages to overcome the lack of additional support from their films – advantages that are unavailable to Deadwyler. Aside from already being a rising star by the time “Monster” came out, Theron had her own Academy-friendly prosthetics and “transformation” to make her an overwhelming winner in 2003. As for Moore, she had Bridges’ advantage of being a multiple past nominee and “overdue” contender in 2014 for “Still Alice,” to say nothing of her Oscar-friendly transformation into a person with Alzheimer’s.

While Deadwyler just recently emerged into the limelight for projects like “The Harder They Fall” and “Station Eleven” before “Till” came out, she is more of an unknown than Theron was by the time she leaped into the Oscar race. And while Deadwyler plays a victim of racial injustice as the mother of the murdered Emmitt Till, her on-screen suffering is more emotionally transforming than physical or mental. It’s a towering performance that is worthy of the win and could pull it off without any additional support but she will also have to contend with the statistic that she would be only the second Black actress to win Best Actress in nearly a hundred years of Academy history, something Jordan Davis went into detail in his piece for NBP here.

Perhaps toughest of all, Deadwyler would probably have a much harder field to beat out than Theron and Moore did. While their rivals barely challenged them, Deadwyler would likely face formidable challengers like a two-time winner and likely early favorite Cate Blanchett (TÁR), overdue and more famous contenders like Michelle Yeoh (“Everything Everywhere All At Once“), Michelle Williams (“The Fabelmans“), and Robbie (“Babylon“), and perhaps past winners like Olivia Colman (“Empire Of Light“) and Viola Davis (“The Woman King“). What’s more, almost all of them may be backed by Best Picture nominees and potential winners – unlike last year when not one single Best Actress nominee came from a film in the Best Picture field. But like with Fraser, pretty much everyone who has seen Deadwyler so far has raved and cried over her, regardless of what else they thought about her movie. Like with Fraser, there are already more than a few people on the record who think Deadwyler can ride passionate support and a tearjerking performance to victory, regardless of her field or the Best Picture lineup. It may be a far more difficult challenge for Deadwyler than for Fraser, especially since she still needs to be guaranteed a nomination amongst the far more formidable competition.

Either way, there is a real scenario where the Best Actor favorite and a potential Best Actress sleeper would both defy recent history by winning. It might not shatter the kind of long-standing trends “CODA’s” victory did last season, yet a double triumph for Fraser and Deadwyler – under certain circumstances – would make Oscar night 2022 something we haven’t seen in some time as well. A winning Fraser-Deadwyler duo will look far more conventional in another scenario where “The Whale” scratches out a Best Picture nomination and “Till” slips into any other field besides Best Actress. Then again, Fraser’s comeback after being sexually harassed and allegedly “blacklisted,” and Deadwyler being only the second African-American Best Actress winner, would make their potential victories historic no matter what. In those contexts, winning lead acting Oscars for films without Best Picture or any other nominations doesn’t seem so daunting. Still, there are reasons why such things haven’t happened in a while and why the few who have done it in this century managed to buck the trend. But in a few months, we’ll have a better idea of whether it can happen twice in one year – and whether Fraser and Deadwyler will even have to try.

Have you seen either “The Whale” or “Till” yet? If so, what did you think of them? Do you think either Danielle Deadwyler or Brendan Fraser will win in their respective categories at this year’s Academy Awards? Please let us know your thoughts in the comments section below or over on our Twitter account and be sure to check out our latest Oscar predictions here.