“MARCEL THE SHELL WITH SHOES ON” 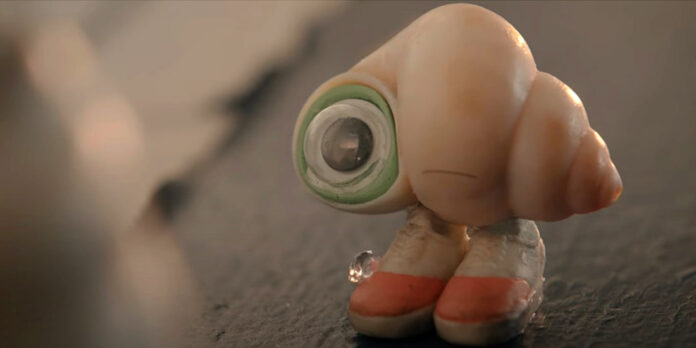 THE STORY – Marcel is an adorable, 1-inch-tall shell who ekes out a colorful existence with his grandmother, Connie, and their pet lint, Alan. Once part of a sprawling community of shells, they now live alone as the sole survivors of a mysterious tragedy. However, when a documentary filmmaker discovers them, the short film he posts online brings Marcel millions of passionate fans, as well as unprecedented dangers and a new hope of finding his long-lost family.

​It’s been over a decade since the first “Marcel The Shell With Shoes On” short film was posted to YouTube – followed by a “sequel” in 2011 and a third film to close out the “trilogy” in 2014 – but in those twelve years, series creators Dean Fleischer-Camp and Jenny Slate have been hard at work creating a feature-length film about Mr. Marcel, and eight years after it was officially announced, “Marcel The Shell With Shoes On” is finally hitting theaters this summer. And for those who have long worried that the shell would’ve worn out his welcome after such a long wait or that 90 minutes of Marcel would be too much, fret not, as Fleischer-Camp and Slate have crafted an endlessly endearing, overwhelmingly optimistic, and mightily moving movie here that stands as one of the sweetest and most emotionally satisfying films of the summer, sure to have audiences chuckling and crying in equal measure.

When Dean (Fleischer-Camp) takes up residence at an Airbnb following a particularly bad breakup, he definitely doesn’t anticipate a roommate in the form of an anthropomorphic shell with shoes on, but that’s precisely what he finds in the form of Marcel (Slate), who quickly introduces him to all the specificities of his little life in his humble abode, from the tennis ball he uses to travel from room to room to the wide variety of nuts he keeps hidden in a nook in the wall to the gorgeous garden tended to outside by his Nana Connie (Isabella Rossellini), who also happens to be the last remaining member of his family after the rest seemed to have been lost when the former inhabitants of the house – a constantly contentious couple (Thomas Mann and Rosa Salazar) – moved out. As Dean starts to document Marcel’s daily habits and post them online, a following forms around the sweet-natured shell, and eventually, a movement also materializes to help Marcel find his family, with Dean shepherding the search as he finds himself growing closer and closer to his new friend and learning valuable lessons about life and love along the way.

Right from the start, the ace up “Marcel The Shell With Shoes On’s” sleeve is its extensive earnestness. Much like the feel-good “Paddington” franchise, “Marcel The Shell With Shoes On” finds itself in this unique space where it manages to be cheerful and comforting without ever feeling cloying – it’s a “nice” film, free of negativity, but it never oversells this attribute, nor does it try to pat itself on the back for it – it simply exists, endearingly, and that’s enough. You’re fascinated from the first frame to the last, enveloped by Slate’s soothing narration as the magnetic Marcel, and it may at first feel perplexing how far the film is able to get simply by letting us view life through Marcel’s perspective for nearly 90 minutes (the family reunion plot really only comes into play in the third act), but that’s the magic of the movie’s screenplay, which is so sharply and sensitively written, interweaving side-splitting humor with sentimental explorations of our existence and our connections with community.

There are some scenes towards the end of the second act where you start to feel “Marcel The Shell With Shoes On’s” short film origins a bit more (as it strains to fill the time with new situations for Marcel to stumble into), but this is when Fleischer-Camp, Slate, and co-writer Nick Paley smartly revisit the plan Marcel has to reunite with his family, leading to a rich and resonant – if semi-rushed – resolution that ties all of this tiny tale’s themes together tremendously and offers many affecting answers to some of “Marcel The Shell With Shoes On’s” lingering mysteries. In such a dark and divided time, there’s also real value in seeing a film so unashamedly embrace and champion open communication and camaraderie, whether it be between Marcel and his family or Marcel and Dean. Alone time is all well and good, but we as humans are naturally social beings, and “Marcel The Shell With Shoes On” is a film that revels in the magic that happens when we work together and when we’re surrounded by supportive and softhearted friends and family, instead of living solo – a reminder that’s sorely needed.

Truly, you’ll find few films more full of light and life this year than “Marcel The Shell With Shoes On,” and that shell is undoubtedly going to go down as one of the standout stars of the summer. It’s rare that a movie can balance being both a soothing salve for the soul and a raucously lively laugh riot, but “Marcel The Shell With Shoes On” is one of the lucky few, trying to juggle a variety of tones over a tight 90-minute runtime and doing so terrifically. In an era of continuous mind-numbing content, a movie like “Marcel The Shell With Shoes On” is all the more monumental – a memorable and moving experience that seeks not solely to offer entertainment but to enlighten you emotionally. And, on both fronts, that shell succeeds.