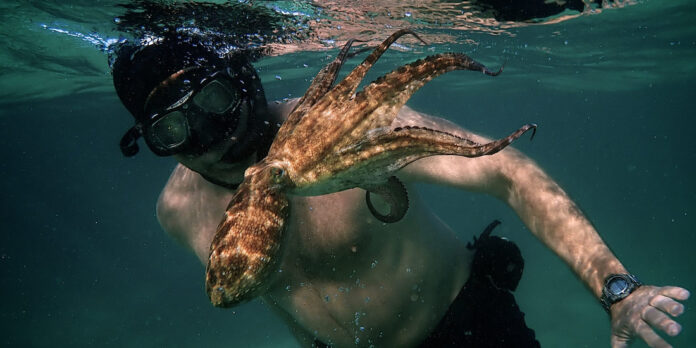 THE STORY – A diver swims with an octopus that lives in a kelp forest off the coast of South Africa.
​
THE CAST – Craig Foster
​
THE TEAM – Pippa Ehrlich & James Reed (Directors/Writers)

​​​​​​Nature documentaries are a dime a dozen. Most of them take humans out of the picture entirely, observing either one species or one particular area of Earth for a period of time and presenting them with an authoritative-sounding narration about the psychology/biology of what we are seeing. Much rarer are those films that feature humans as an integral part of their surroundings, usually learning some sort of lesson from the animals/landscapes they’re observing. The Netflix documentary “My Octopus Teacher” starts as one of the latter, but most of its running time focuses on being one of the former. While this approach leaves the human element of the film’s story often feeling like a bit of an afterthought, it still manages to garner an emotional response through the intimacy and purity of its story.

Naturalist and filmmaker Craig Foster found himself in a depressed state in the early 2010s, and in an effort to get back to himself, began free-diving near an underwater kelp forest near Cape Town, South Africa. Before long, he spies a ball of shells on the bottom of the ocean floor that turns out to be the makeshift shelter of an octopus. Over time, he becomes obsessed with the octopus, observing her and learning from her, eventually returning to life and his family. Things start out in a Werner Herzog-ian vein, helped quite a bit by Foster’s mellow, measured, lightly philosophical narration. But this opening where Foster talks about what drove him to the water – what he was looking to get out of it and why reflecting back on the experience – is a bit of a lie. The heart of the film, directed by Pippa Ehrlich and James Reed, is about octopuses themselves. Through observing this one octopus, Foster and we learn about the whole species, and they are the most fascinating creatures.

Even just looking at the octopus for the shortest length of time proves what an enigmatic creature it is. Her shape and size seem to be constantly changing, looking completely different from one moment to the next. An octopus’s skin can change color to match its surroundings, and its bodies are fluid. Each of their eight tentacles is practically a brain, each of her 2,000 suckers moving independently of each other to touch things and relay information to the body’s nerve center. Watching the octopus move is fascinating enough, but watching her hunt and then attempt to protect herself from being hunted is even more so. For the non-marine biologists among us, this is something we have not seen before, and the environment in which she lives is pretty foreign to us as well. The kelp forest is gorgeous, full of so many different animal and plant species and multi-colored rocks and shells, and the film captures it in crystal-clear images that heighten its otherworldly beauty. This beauty is heightened by Kevin Smuts’s score, which does not shy away from cliché, but effectively manipulates the emotions.

The film’s slight problem is Foster himself. He doesn’t have the charisma of a Werner Herzog, so in the few moments when he goes off on tangents to philosophize about how spending so much time with this alien-like creature was opening himself up to “the other,” it’s incredibly easy to roll one’s eyes at him. The film also does not care even the slightest bit about Foster’s family or relationships with other humans, so we get no evidence of all this supposed change that observing and becoming close with the octopus has made in his life. When Foster says things like “in a strange way, our lives started mirroring each other,” we have to take it at face value, as the film gives us no real reason to believe it.

In the end, though, that doesn’t really matter much. The film takes its cue from Foster’s low-key temperament, and after not much time at all, becomes downright hypnotic to watch. The luscious cinematography and gentle score become the perfect escape from the painful world of 2020/2021, just as Foster’s daily trips to the kelp forest were for him. The storyline of the octopus’s life is a strong spine, effectively showing us what it’s like to be an octopus in as close to the first-person point of view as we will ever get. “My Octopus Teacher” may be somewhat standard stuff as far as nature documentaries go. Still, it’s an incredibly beautiful one, one that gives us a gorgeous close-up look at an animal very few people have ever seen in its natural habitat. The connections it draws between the animal’s life and its human subject’s life may be tenuously presented but this unique aspect brings us closer to nature, heightening our connection to the underwater world that has seemed even farther away from us than usual these days. It’s one hell of a pleasant escape, one that will teach you quite a bit, and there’s not much more you can ask for from a nature documentary.

Powered by JustWatch
Share
Facebook
Twitter
Copy URL
Previous article
“wework: or the making & breaking of a $47 billion unicorn”
Next article
The Next Best Picture Podcast – “The Courier”