“EVERYTHING EVERYWHERE ALL AT ONCE” 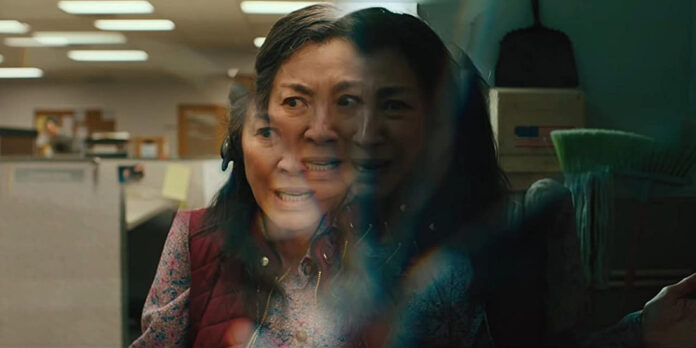 THE STORY – An aging Chinese immigrant is swept up in an insane adventure, where she alone can save the world by exploring other universes connecting with the lives she could have led.​

​​The plot of “Everything Everywhere All At Once,” the latest film by the duo known as Daniels (Dan Kwan and Daniel Scheinert), sounds like every significant sci-fi/fantasy property of the past decade or so mashed together like they were potatoes: Evelyn Wang (Michelle Yeoh) is barely holding it together in her humdrum existence running a laundromat with her chipper but unhelpful husband (Ke Huy Kwan). Her lesbian daughter Joy (Stephanie Hsu) is drifting away. Her highly judgmental father (James Hong) is now living with them. The laundromat is hosting a celebration for the Chinese New Year soon, and to make matters worse, the business is being audited. One day while meeting with their auditor Deirdre (Jamie Lee Curtis), Evelyn is told by her husband that he is not, in fact, the husband that she knows, but another version of him from another universe, and that among all the Evelyns in all the universes, she may be the only one who can save the multiverse from a great, unspeakable evil. In order to do this, she will have to create connections with versions of herself from other universes and use their skills to fight and overcome this evil. In doing so, Evelyn will have to reckon with her past decisions, the lives she could have led, and her fractured relationship with her daughter. Seamlessly weaving together tropes of immigrant family sagas, philosophical sci-fi spectacles, relationship dramas, and martial arts flicks alongside their own patented brand of off-kilter wackiness, Daniels have created something wholly singular, the type of once-in-a-blue-moon go-for-broke triumph that announces a filmmaker as a true master of the cinematic art. And it’s also the best popcorn movie of the decade so far. Yes, we truly can have it all!

Given the state of the world in the past two years, it’s easy to obsess over how things could have been different if just one tiny thing had changed. It’s also easy to come to the conclusion that nothing we do matters because the world will just screw it up somehow. “Everything Everywhere All At Once” grapples with these issues and is surprisingly moving because of it, but it’s never dour or overly serious. I wouldn’t dream of spoiling any of the film’s ingenious visual gags, but trust that some of the alternate universes we get to see are so supremely silly that it’s nearly impossible to imagine the person who wouldn’t at least chuckle at them (the moments riffing on films as disparate as “Ratatouille” and “2001: A Space Odyssey” are absolute howlers). Despite the heaviness of the film’s themes, Daniels imbues the film with such a sense of playfulness that it feels as light as puff pastry. Even when the film takes a severe dip into the waters of nihilistic philosophy, it will still splash at you every few minutes to ensure you’re entertained while you ponder the meaning of life.

If all of this sounds like a directorial showcase where the performances are an afterthought, rest assured that the entire ensemble is doing fantastic work. Hsu is heartbreaking as Joy, even when she lashes out in anger. Quan is a lovable presence, even and perhaps especially when he turns into a martial arts badass, unclipping his fanny pack and using it as a weapon in one of the film’s many incredibly clever fight sequences. But the film belongs to Yeoh. Daniels have gifted her with the best role she’s ever had in an English-language film, and she repays them with the performance of a lifetime. Her multifaceted, layered performance matches the film around her beat for beat, turning on a dime from sullen to joyous, dull to sharp. The full range of her skills has never been put to better use, from her sly sense of humor to her martial arts physicality. Her most potent asset here, though, is her capacity to display many different types of longing. In her own universe, she is experiencing a deep-seated longing for a better life. In another, where a genetic deformity has caused everyone to be extremely dextrous with their toes, she’s confused by and longing for her lover. In another, shot like a Wong Kar-Wai film in which Evelyn is essentially Michelle Yeoh, she experiences a sudden longing for a life that could have been. This is the actress’s crowning achievement, a cementing of her status as a global superstar that doubles as an ode to her legendary career. If awards bodies have any sense, they will remember and honor her come December.

It’s nearly impossible to explain the experience of watching this film fully. It is one of those rare beasts that feels like it could do anything at any moment and actually does. In this world of so many pre-processed, focus-grouped pieces of product disguised as films, “Everything Everywhere All At Once” stands out as a piece of pure cinema. Nothing about it feels safe or pre-ordained, and it comes by its emotional finale, honestly, by putting work into making us care for these characters and their world(s). Thanks to the directors’ light touch and penchant for the oddball, it also never feels like a piece of Serious Art. This is exactly the kind of exhilarating entertainment that Hollywood should produce more of but is so obviously a product of a singular source that it’s understandable why they don’t. None of this is to say that the film is perfect. Indeed, it is doing so much that at a certain point, it can become exhausting, and by the end, it feels longer than it actually is, even though it is never anything less than completely captivating. But captivating it is; even from the first frame, you’ll be glued to the edge of your seat, gleefully anticipating what surprise Daniels will throw at you next. Watching “Everything Everywhere All At Once” is like eating a gourmet burger made from wagyu beef – it may be a bit exotic, and it may be difficult to get access to. Still, once you taste it, you’ll understand just how flat and basic (albeit nostalgically comforting) every fast-food burger is. There’s a place for both in this world, but after so many cinematic fast food burgers, it sure is nice to have something crafted from such rich ingredients and with such care and attention.