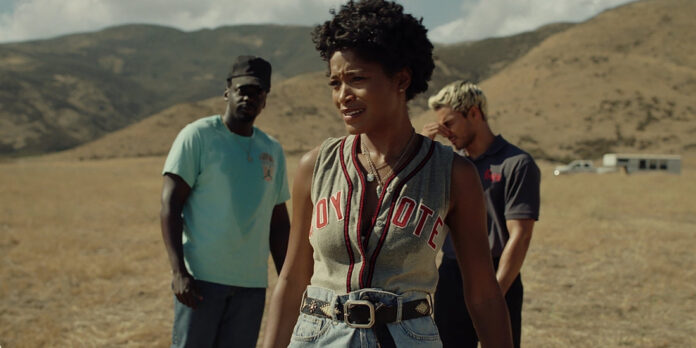 “What we’re about to do…They can’t erase that.”

Like Christopher Nolan, Denis Villeneuve, Paul Thomas Anderson, and a very small list of few other filmmakers, Jordan Peele’s name can sell a movie on its own. After winning an Academy Award for Best Original Screenplay with his directorial feature debut “Get Out,” and then confounding and dazzling audiences with “Us” two years later, Peele truly cemented himself as the new voice in modern horror. Now, with his latest film, “Nope,” Peele is turning his eye away from the social commentary of his previous two films and toward the sky as he has expressed he wanted to put spectacle first and make a can’t-miss event film for audiences. Even if you’re not aware of Peele’s intention outside of the film, “Nope” opens up with this declaration with a verse from the Book of Nahum, the seventh book of the 12 minor prophets of the Hebrew Bible, stating, “I will pelt you with filth, I will treat you with contempt and make you a spectacle.” With stunning cinematic moments of pure dread, terror, and wonder, Peele has indeed delivered on his promise to bring audiences something unique, but at what cost?

“Did you know the very first assembly of photographs to create a motion picture was a two-second clip of a Black man on a horse?” asks Haywood Hollywood Horses co-owner Emerald Haywood (Keke Palmer), as she and her brother (and fellow co-owner of the Californian desert horse ranch) OJ Haywood (Daniel Kaluuya) get ready to train a film crew on animal safety as they’re about to lend one of their horses for a film shoot. The Black man Emerald is referencing was her and OJ’s ancestor, and the Black-owned horse ranch has been in their family for generations since then. Out in the middle of nowhere (so far away from the nearest town that Emerald can casually blast her record player at maximum volume at night without a single disturbance), the two have created a productive life for themselves despite offers to sell the ranch to local tourist “Star Lasso Experience” amusement park owner and former child star Ricky “Jupe” Park (Steven Yeun). One day, random objects start falling from the sky with a coin specifically striking OJ and Emerald’s father (Keith David) in the head, killing him instantly. Six months pass, and the bizarre occurrences do not stop there as OJ and Emerald begin to notice their electricity completely shuts off when an unidentified flying object (UFO or UAP as they’re not being referred to nowadays) starts hovering over their home, disguised as an unmovable cloud in the sky. With the help of Frys Electronics Store salesman Angel Torres (Brandon Perea) and overly serious documentarian filmmaker Antlers Holst (a scene-stealing, deep raspy-voiced Michael Wincott), Emerald and OJ formulate a plan to capture the UFO on film for what they deem to be the money shot (or the Ophra shot). Using new and old cameras, air dancers (or as “Family Guy” famously dubbed it, the wacky waving inflatable arm flailing tube man) and their grit, the brother-sister duo whose family changed the industry before with the establishment of their business attempt to carve out their own place in history.

Re-teaming with Oscar-winner Daniel Kaluuya (“Judas And The Black Messiah“) after their successful collaboration on “Get Out,” Peele’s biggest miss with “Nope” is the writing for his characters. While there is a central relationship between OJ and Emerald which shows hints of a spark that causes OJ to come out of his shell more, Kaluuya underplays the role almost too much compared to Palmer’s more energetic performance. However, the two of them and the supporting cast are all let down by Peele’s non-existent character development. Events may happen to OJ and Emerald, but outside of the plot’s story beats, we don’t really know anything about them on an individual level. There are no meaningful character arcs, and motivations are left unclear. All of the screenplay’s themes, ideas, and metaphors are used to mask this flaw. Still, Peele is unable to successfully unite them all into a single satisfying whole, mostly because he fails to establish early on why we should care about any of these characters outside of the traumatic events they experience, whether its OJ watching his father die from an unexplainable event early on or a flashback involving Ricky having to witness a star-monkey named Gordy go on a bloody rampage against his cast and crew members on a film set back when he was a child.

“Nope” is Peele’s most ambitious project yet, filled with even more refined technical precision than his previous two films (mostly thanks to working with Academy Award-nominated cinematographer Hoyte Van Hoytema who shot this primarily in IMAX). The soundscape created by him and his team is the film’s definite highlight, with ambient, dark sounds heard over the Californian desert fields. The audience does not know if these sounds are cries of panic from humans, a horse’s scream, or the dusty winds hurling over the landscape. It’s an all-enveloping and creepy atmosphere, expertly punctuated whenever the sound completely drops out to immerse audiences in some sequences of pure fright, including Gordy’s attack on a television soundstage in 1998 or OJ hiding out from the UAP in his car. When Peele takes us into the UAP’s interior to see and hear what happens to the humans it pulls up like a tornado, the nightmarish sounds are enough to make your blood curl. Peele certainly knows by now how to elicit horror from his audiences, and outside of the film’s threatening tone, the jump scares in “Nope” are perfectly calibrated to do just that as well. However, what one will walk away more affected by will be the moments where the sound work fully hovered over them, just as the UAP does over Haywood ranch with a sense of anxiety and fear.

The film’s marketing has cleverly highlighted the more spectacular scenes, but in a way that still preserves whatever secrets are to be found in Peele’s screenplay. Unfortunately, those mysteries and thematic connections do not reverberate as strongly as “Us” or especially “Get Out.” Some effort is put into the theme of OJ and Emerald establishing their own place in history, as many Black people before them have either had credit stripped away from them for their accomplishments or have been erased entirely. Much will be discussed regarding the thought-provoking ideas Peele has put forward regarding the American Western (watching Kaluuya ride on horseback in the film’s finale dressed in a “The Scorpion King” crew orange hoodie already feels like a new iconic image), our fascination with spectacle, and our treatment of animals (the film’s title sections are named after the animals) and the planet, but how much of it will matter if we cannot get emotionally invested in the characters? One thing is for sure, though, Jordan Peele’s spot in cinematic history is only growing deeper, as many will continue to debate “Nope,” its meaning, and its place within Peele’s evergrowing filmography for years to come.