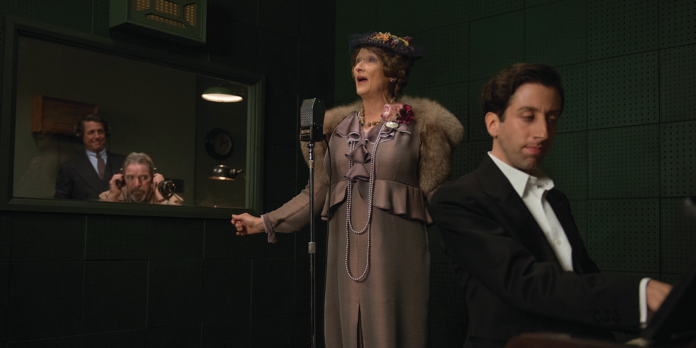 THE STORY – In the 1940s, New York socialite Florence Foster Jenkins (Meryl Streep) dreams of becoming a great opera singer. Unfortunately, her ambition far exceeds her talent. The voice Florence hears in her head is beautiful, but to everyone else it is quite lousy. Her husband St. Clair goes to extreme lengths to make sure his wife never finds out how awful she truly is. When Florence announces her plans for a concert at Carnegie Hall, St. Clair soon realizes that he’s facing his greatest challenge yet.

Have you ever heard the expression, “It’s so bad, it’s good?” That was the epitome of Florence Foster Jenkins who was passionate about music and loved to sing, but could not meet the standard’s of society’s objective viewpoint towards what constitutes as a good singer. Delicately handled with the appropriate amount of comedy and drama by director Stephen Frears (“The Queen” & “Philomena”) and acted to perfection by Meryl Streep and Hugh Grant, “Florence Foster Jenkins” is a well told true story of an individual who stood in the face of everyone and sang her heart out. It may not have been perfect and neither is the movie, but you cannot deny the heart which both the film and its subject emits through passion.
​
​Taking place in New York City during the 1944, socialite Florence Foster Jenkins (Meryl Streep) has always loved music. She has dreams of one day becoming a famous opera singer. She will one day become famous but not in the way she intended as her singing is quite objectively horrible. Her devoted husband St. Clair Bayfield (Hugh Grant) does everything in his power to prevent his wife from discovering the truth about her singing ability as she believes herself to be quite good. With a new piano man accompanying them in Cosme McMoon (Simon Helberg), Florence musters the courage to announce a live performance at Carnegie Hall where she will be performing, much to the concern of St. Clair.

Meryl Streep is probably the greatest actress to have ever walked the face of the earth. Every year she turns in yet another memorable and awe-inspiring turn and here as Florence Foster Jenkins she succeeds yet again. However, surprisingly it’s Hugh Grant as St. Clair Bayfield who steals the show with his best performance in years as the devoted husband who could not bear to see his wife fail despite her shortcomings. Together, their energy, delivery, and chemistry ignites the screen in what is a lovely duet between the two actors. One should not discount Simon Helberg as Cosme McMoon who is absolutely hysterical in his comic timing and polite awkwardness when sharing the screen with Hugh Grant and Meryl Streep.

Stephen Frears makes a competently well-made film which has lavish costumes and fantastic performances. The screenplay doesn’t have higher aspirations than to be an enjoyable mixture of both comedy and drama. However, the film’s message of reaching for your dreams despite the naysayers and the physical limitations in place is both heart warming and life affirming for those looking to do the same. One need not look any further than when Florence watches a live concert performance early on in the film and is moved to tears by the loveliness of the singinging involved. While Florence was never able to make anyone achieve that same exact feeling in life, Stephen Frears, writer Nicholas Martin and the actors succees in moving us to tears by the film’s end.

“Florence Foster Jenkins” is a film that is all about achieving your dreams and what that means to you. Success is trying. There is only failure if you do not try. The “American Idol” age of how we judge singers and their talent could learn a thing or two from a film such as this. With a lively performance ranging in emotions from Meryl Streep and a high point in the acting career for Hugh Grant, “Florence Foster Jenkins” becomes quite the enjoyable movie going experience that makes us laugh, makes us cry and teaches us a few good lessons along the way.