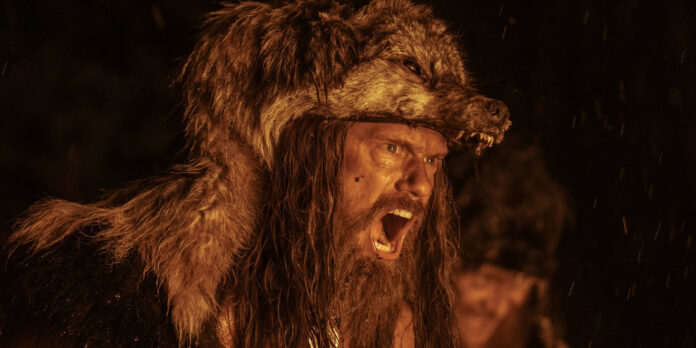 THE STORY – Prince Amleth is on the verge of becoming a man when his father is brutally murdered by his uncle, who kidnaps the boy’s mother. Two decades later, Amleth is now a Viking who raids Slavic villages. He soon meets a seeress who reminds him of his vow — save his mother, kill his uncle, avenge his father.
​
THE CAST – Alexander Skarsgård, Nicole Kidman, Claes Bang, Anya Taylor-Joy, Ethan Hawke, Björk & Willem Dafoe

​When it was announced that Robert Eggers, the same director responsible for “The Witch” and “The Lighthouse,” would be setting out to make the definitive Viking movie with “The Northman,” many were skeptical due to the film’s larger production and increased budget compared to those first two films. Surely, there had to be some level of studio interference that would result in Egger’s third feature film being dumbed down and stripped of the same unique elements which have made him one of the most standout directors of the last decade; right? Well, anyone who was worried “The Northman” would not be a full-blown Robert Eggers movie can rest easy. Not only is the director’s distinct style retained, but his fascination with exploring cultures and lore through language, customs, period re-creation, and diving deep into the darkness of the human soul is still intact, only this time, presented on a massive scale we have seen from him before.

Amleth (Oscar Novak) is a young Viking prince living peacefully in the North Atlantic close to the Orkney Islands with his mother, Queen Gudrún (Nicole Kidman). When his father, King Aurvandill (Ethan Hawke), returns home to his beloved son and wife wounded from his journey, he puts Amleth through a ritual (led by Heimir the Fool, played by a creepily committed Willem Dafoe). Embracing their inner beasts and barking like dogs while the supernatural becomes a reality, Amleth is all set to take his rightful place as his father’s heir should something terrible happen to him. Not long after, Amleth’s uncle and Aurvandill’s brother, Fjölnir (“The Square’s” Claes Bang), betrays and murders the king in front of Amleth’s eyes. The ten-year-old Amleth is forced to flee his kingdom and leave his mother behind. While rowing away by boat, he repeatedly tells himself, “I will avenge you, Father. I will save you, Mother. I will kill you, Fjölnir,” a phrase which he’ll carry in his vengeance fueled heart for twenty years. Now, Amleth (a fully-grown and physically imposing Alexander Skarsgård) is a Viking berserker who has lost his way as he and his raiding party brutally attack Slavic villages in Eastern Europe as they separate the strong from the weak. One fateful evening, a Seeress (played by a returning Björk — this marks her first feature film role since Lars Von Trier’s “Dancer In The Dark”) reminds Amleth of his destiny to avenge his father, save his mother, kill his uncle. Amleth leaves his clan and swims upstream, where he stowaways on a slave boat traveling to Iceland. There, he meets Olga of the Birch Forest (Anya Taylor-Joy), a sorceress who tells Amleth, “Your strength breaks men’s bones. I have the cunning to break their minds.” Together, they become enslaved people under Fjölnir’s rule on his farm in Iceland. Seeing the vengeance that has driven him this far finally within his grasp, Amleth must find a way to get close to his uncle and honor his vow to his father.

Visually dazzling, meticulously researched, and utterly brutal in its grounded presentation of Viking lore, “The Northman” tells a deceptively simple story that starts out slow and pretty straightforward at first. As it progresses, Eggers richly explores the hatred pushing Amleth towards his goal of vengeance in a manner that is not necessarily new (this ancient Scandinavian legend served as the primary inspiration for William Shakespeare’s “Hamlet”) but how he dresses up and presents the themes of the story is rarely seen in films of this size nowadays. Much like last year’s “The Tragedy of Macbeth,” even if you cannot fully understand the heavily researched language Eggers and his co-screenwriter, Icelandic novelist and poet, Sjón, have conjured up for this revenge tale, the story is easy to follow through Eggers’s visual command of the medium and the committed performances from the actors.

Alexander Skarsgård has bulked up for films before, such as “The Legend Of Tarzan,” and we’ve seen him be downright terrifying in HBO’s “Big Little Lies,” but here, he’s reached a primal level of savagery and sheer physical power that is unlike anything we’ve ever seen the 45-year-old actor deliver. Drenched in blood and embodying the physical characteristics of a wolf and bear, Skarsgård roars and howls with sheer force as he cuts down his enemies (sometimes even biting them) with his strength. The actor even receives his own “Gladiator” moment (“My name is Maximus Decimus Meridius…”) when he gets to ragefully shout “…And I am his vengeance!” before attacking more men on his quest for revenge. The first act is especially tough to get through as Amleth’s time as a child is rushed before Skarsgård comes on screen, and when we first see Amleth as a man, he’s aiding in the brutal massacre of innocent people, including women and children. Such a rocky start for a character we’re supposed to be following on this near two and a half hour journey is something very few actors could overcome, but Skarsgård, through sheer force of will, gets us there by the end. It’s easily one of the best performances he has ever committed to despite there being little to no character depth for Amleth outside of his thirst for vengeance.

Outside of Skarsgård, the rest of the supporting cast also suffers from a lack of character development as Eggers gets a little too lost in the world-building to focus on anything else. Still, enough material is afforded to each of the supporting characters to enrich Eggers’ vision. Nicole Kidman fans may feel slighted at first as her Queen Gudrún is barely in the film at all during the first and second acts, but when the third act rolls around, she is given a monstrous monologue and an opportunity to share the scene again with her “Big Little Lies” co-star in an equally messed up manner that will have audiences squirming. Past Eggers collaborators Willem Dafoe (“The Lighthouse“), Ralph Ineson Kate Dickie, and Anya Taylor-Joy (“The Witch“) all return with minor but effective roles except Taylor-Joy, whose Olga teams up with Amleth for their own mutual survival. The section of the movie where the two are devising nightmarish schemes that will haunt Fjölnir, his family, and his men is where the film finally starts to have a little bit of fun with its highly dark and serious premise. You can tell Anya Taylor-Joy is enjoying the chance to work with Eggers again as she finds ways to make Olga more than a simple love interest for Amleth and continues to show us the depth of her talent. Like Kidman, Claes Bang’s character and performance really come alive in the film’s third act as his villainous Fjölnir is given some extra unexpected depth, highlighting the film’s themes of vengeance and the consequences such actions can have on our souls. When he and Skarsgård have their climatic, epic showdown in front of an active volcano at Mount Hekla in what is deemed “The Gates Of Hell,” the operatic quality of the filmmaking combined with the emotional and physical commitment from the actors makes for a grand spectacle worthy of the preceding two hours which had come before it.

The technical mastery of Eggers has already been established in his previous two films, so it shouldn’t surprise anyone that “The Northman” continues that trend as he reunites a third time with Oscar-nominated cinematographer Jarin Blaschke to beautifully capture the vast landscapes of Iceland with several long and carefully composed takes. The nighttime photography is particularly striking as Blaschke deploys a desaturated, almost monochromatic look which gives those scenes a distinct look and ominous feeling. And the beforementioned fiery final confrontation between Amleth and Fjölnir is as epic as modern-day filmmaking gets, with lights, smoke, and a combination of practical and visual effects being utilized to engross us. There is a heavier usage of visual effects than what Eggers could use in the past, but they’re all in service of the grounded and heavily researched story Eggers wants to tell. The costumes by Linda Muir are extensive, representing separate cultures and traditions and encompassing a cast of hundreds. Each of the actor’s costumes has been carefully thought out to be both period-accurate and inform the audience about the character wearing them. It’s jaw-dropping work, especially the outfit worn by the otherworldly Björk, which contains a memorable headdress. And finally, the score by U.K.-based musicians Robin Carolan & Sebastian Gainsborough, in their first feature film score, is what ties it all together. Eggers wanted authentic instruments from the Viking Age to drive the transportive score, but the duo also incorporated symphonic strings, a choir, and drums to make the soundscape of “The Northman” feel thunderously monumental and entrancing.

While “The Northman” may not be my favorite film from Eggers, it’s undoubtedly his most ambitious and mainstream offering to date. However, the final product does not seem to indicate the young filmmaker’s voice has been silenced or compromised. Credit should be given to Focus Features for bankrolling such a large-scale production, one which will probably polarize audiences as Eggers unleashes wondrous possibilities for what can be achieved with blockbuster filmmaking today. “The Northman” is a ferocious monster of a movie, packed with blood and gore, mythology, and the kind of period re-creation that is fully immersive. Eggers set out to tell a cohesive story that would stand the test of time as the definitive Viking film. It may not be perfect, but one cannot deny he has achieved exactly that.