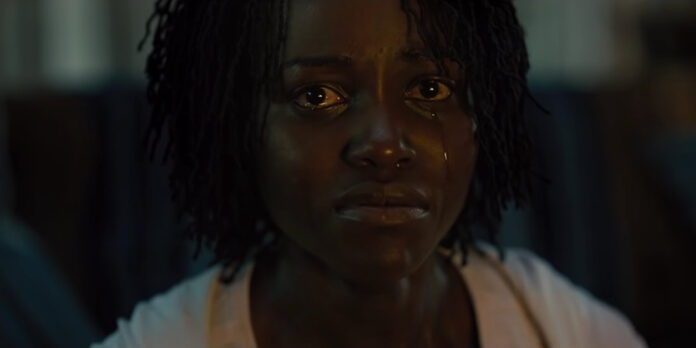 THE STORY – Accompanied by her husband, son and daughter, Adelaide Wilson returns to the beachfront home where she grew up as a child. Haunted by a traumatic experience from the past, Adelaide grows increasingly concerned that something bad is going to happen to her family. Her worst fears soon become a reality when four masked strangers descend upon the house, forcing the Wilsons into a fight for survival. When the masks come off, each stranger takes the appearance of a different family member.

​Jordan Peele has nothing left to prove. “Get Out” was a clear cut massive success not only commercially and critically, but culturally as well. Peele had an eye for horror and we saw that with his debut. But something more sinister has birthed out of him this year. Something, that you want to look away from but your curiosity just won’t let you. “Get Out” was an outstanding start to Peele’s career and the entire world is putting a magnifying glass up on his sophomore project. Let me tell you, we can take that magnifying glass away because “Us” is downright genius.

While on a family vacation to their summer home, the Wilson family becomes terrorized by an unknown threat. After a terrible experience when she was a child Adelaide Wilson (Lupita Nyong’o) begins to become more and more familiar with this presence threatening her family. Once their once tranquil summer home is invaded it becomes clear to the Wilson’s, they’re being hunted by themselves. Doppelgangers that look exactly like them but are a bit twisted and pure evil with only one goal, to kill their counterparts.

Jordan Peele’s direction has skyrocketed to an entirely new level with this project. Not only did he figure out how to completely immerse his vision in with countless influences like Darren Aronofsky’s “Black Swan” and Satoshi Kon’s “Perfect Blue,” but he figured out just what makes an audience tick. “Us” is a horror film, there is no doubt about that. There won’t be the whole comedy, suspense thriller debate that happened with “Get Out.” No, “Us” shakes you to the bone. Peele’s uses the background and things moving even when they’re out of focus to frighten us. He has the ability to caress one single moment and drag it out for as long as humanly possible so you can feel the discomfort grow and then when you finally can’t take the pressure anymore, he cuts. The best way to describe Peele’s direction with this film is patience. Nothing feels rushed and certain scenes, specifically in the first act, even start to feel like they are dragging at times. But I don’t think Peele is trying to make moments drag to bore us. I think he is purposefully letting these moments go on too long. For example, when we stare at a television screen in the first shot of the film for almost a full two minutes, or we watch a character walk around an environment for what feels like a ten-minute sequence, that’s when things start to feel too long. But I believe Peele’s objective was to get under our skin with this technique. Yank, pull and contort these shots until they are nothing but bone so that we can physically feel their importance.

The clear thing to take away from this film is that Jordan Peele isn’t here to play. Not only has his technical craft gotten better but how he approaches telling his stories has improved. To learn these skills on only your second film is just so impressive. First and foremost, Peele clearly has an eye for horror and is an obvious maestro of the genre. I’ve seen some say that the visual style feels rather Kubrick-ian in ways and while I totally agree, I’d like to throw another name into the hat of comparisons and that is David Lynch. “Us” feels like a more grounded David Lynch project.
.
The main visual element that gives off a Lynchian vibe is Peele’s static shots. He will let the actors perform their craft within a static shot and force the audience to focus on nothing but that actor’s performance. We see this mostly with Lupita Nyong’o’s character, but it does show up among the rest of the cast as well. Winston Duke, Shahadi Wright Joseph, and Evan Alex, they all get these moments where we just have to uncomfortably sit with them among the horrors. Instead of flashing images at us or creating ridiculously loud sound cues, the horror for “Us” comes from the smaller, more intimate moments. Like when Evan Alex’s character takes off his plastic gorilla mask and his doppelganger copies his movements to reveal the horror underneath. There’s nothing fancy or over the top being used here, it’s just simple filmmaking, placing two images together to create suspense.

While Peele does indulge himself at times with his murder scenes or even with other scares, the scenes and shots that stick with me the most are the simpler ones. The split focus shot of two Lupita Nyong’o’s both staring at the camera is what sends a shiver down my spine. These little moments show that Peele understands that all you need in order to scare an audience is not bombastic jump scares, but patience.

The entire ensemble is amazing, of course. That seems to be a specialty of Peele’s, is too ensure the entire cast gets some time to shine. Winston Duke is great as the embarrassing dad character, Evan Alex is perfect as the curious youngest child with a heart of gold, Shahadi Wright Joesph is electrifying as the confident badass older sibling, but the true star of the whole show is Lupita Nyong’o. Nyong’o transcends herself onto an entirely different level than the competition here. This performance easily gets catapulted into the category of “greatest horror performances of the 21st century” and if not, “greatest horror performances of all time.” Yeah, she’s that good. The way that Lupita can make you sink into her eyes with the way she looks at the other characters or makes you feel the pain with the tone of her voice, is all something that few other actors possess. She is fierce, dominant, powerful, and relentless. From her shrieks and screams to her laugh and smile, she flawlessly plays both sides of the spectrum and never once loses her step.

“Us” is a film that requires, even demands, multiple viewings. So much is at play within the film like the references to the bible, or even what the musical cues mean to the overall story. Everything is so deeply layered within Peele’s sophomore film that it is truly overwhelming at times. “Us” is a terrifying film but not in the traditional way. There’s no monster under the bed or ancient demon coming to find you, it’s just…you. The horror comes from the thing that stares back at you in the mirror which is frightening on a profound level. “Us” will knock the wind out of you because it makes you question yourself. It forces you to look deep down and think about what is it that you are truly afraid of. Are you afraid of the world surrounding you? Or are you simply afraid of yourself?