“THE BANSHEES OF INISHERIN” 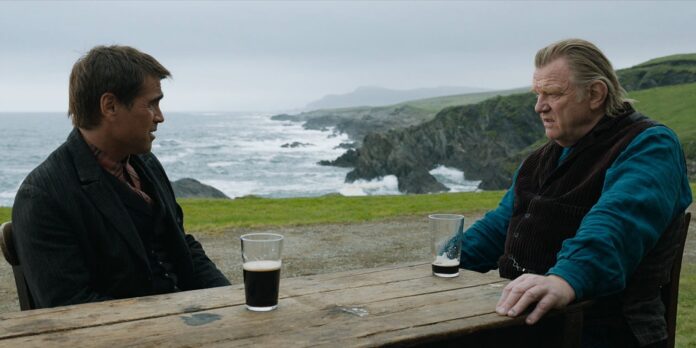 THE STORY – On a remote island off the coast of Ireland, Padraic is devastated when his buddy Colm suddenly puts an end to their lifelong friendship. With help from his sister and a troubled young islander, Padraic sets out to repair the damaged relationship by any means necessary. However, as Colm’s resolve only strengthens, he soon delivers an ultimatum that leads to shocking consequences.
​
THE CAST – Colin Farrell, Brendan Gleeson, Kerry Condon & Barry Keoghan
​
THE TEAM – Martin McDonagh (Director/Writer)
​
THE RUNNING TIME – 114 Minutes

​​In the small island village of Inisherin, Pádraic (Colin Farrell) is known as the nicest guy in town. He always stops to say hello, pets every dog in the village, and is best friends with his fiddle-playing mate Colm (Brendan Gleeson). That is, until one day, Colm announces that he doesn’t like Pádraic anymore. No reason is given. It is just the way that it is. Pádraic, understandably, is beside himself. Was it something he did? Or said? Pádraic will never know because Colm’s lips are sealed.

If you consider that premise and those actors, it will probably come as no surprise that “The Banshees of Inisherin” comes from the mind of Martin McDonagh, the writer/director behind such darkly comic classics as “In Bruges,” “Seven Psychopaths” and “Three Billboards Outside Ebbing, Missouri.” And when McDonagh’s around, there is always something slightly askew, something deeper and funnier, and you can be sure that for at least one of his characters, it is not going to end well.

As much of a fan as I am of McDonagh’s films, however, I am an ever bigger admirer of his work in the theater with such plays as “The Beauty Queen of Leenane,” “The Cripple of Inishmaan” and “The Lieutenant of Inishmore,” all of which were set in small Irish villages. There is something about the people who inhabit these hamlets that McDonagh knows very well, and they have brought out an extra amount of poetry in his writing that has taken these plays to another level. My fervent wish has always been that somehow McDonagh could bring that same Irish-village inspiration to the big screen. Thankfully, that same spirit is flowing throughout the entirety of “The Banshees of Inisherin.”

Indeed, the village of Inisherin feels like a character itself in the film with its cobblestone streets and muddy roads. And in the distance, occasional explosions in the ongoing 1923 Irish Civil War are visible on the mainland, another world away. All the neighbors have their own quirks; from the town gossip and pervy police chief to the local gollum (Sheila Flitton) forever predicting doom to anyone crossing her path and pub owner Jonjo (Pat Shortt), into whose tavern the town pours every afternoon at two. And where Colm and Pádraic’s feud only escalates.

What begins as Colm’s simple, “I just don’t like ya’ no more,” only heats up as his insistence for distance results in the younger man trying ever harder to salvage the friendship that meant so much to him. When Pádraic’s pleadings become too much for Colm, he lays down an ultimatum: every time Pádraic bothers him to try and make up, Colm will cut off one of his own fingers. Pádraic thinks he’s kidding, of course, and attempts one last session of tough love, which Pádraic thinks may just have ended their feud. Then one night, something small and bloody hits Pádraic’s front door.

Of all the contemporary writers, there isn’t one who loves language and manipulates it so skillfully for maximum effect as McDonagh. His best lines often begin in a familiar way where one thinks they know where the sentence is going, then he takes a quick left turn and finally reveals the zinger. That technique inevitably increases the laughs, and the dialogue he wrote for “The Banshees of Inisherin” has generated some of the longest, loudest laughs that I’ve heard in a theater in quite some time.

But McDonagh’s dialogue can only indeed come to life when it’s delivered by a cast of high quality. For example, Irish actor Barry Keoghan’s quirky line readings fit perfectly with McDonagh’s own style. His Dominic, the village’s idiot savant who knows more than he lets on, may be a small role, but Keoghan knows how to land his lines and make each of his scenes count.

Perhaps the film’s most significant discovery is Kerry Condon, an Irish actress who played a small part in “Three Billboards Outside Ebbing, Missouri” but really comes into her own here with a more substantial role. As Pádraic’s sister Siobhán, she loves her brother deeply, even stepping up to stand by his side as he faces his tormentor. But Siobhán knows that a fulfilling life for her lies not in Inisherin but on the mainland, and as the days approach before her departure, she becomes concerned that this feud will break her brother for good. There are deep reservoirs of love inside her tough-talking Siobhán, and Condon brings out every shade in the character, offering superb support.

But the real lure for any film lover is the long-awaited reunion of the “In Bruges” stars Farrell and Gleeson. These two men have a chemistry together onscreen that is totally their own, a bickering brotherhood bonded in respect and love. With “The Banshees of Inisherin,” Gleeson takes a back seat to his comrade as Colm, a man who sees his days as only growing shorter and having little patience left for his best friend’s dullness. This is Gleeson working at the top of his game. He suggests moments of affection that once existed between the friends only to pull back, knowing that there is any crack in his wall, Pádraic will be back to dominate the rest of his life. It’s one of the best performances that Gleeson has ever given.

But “The Banshees of Inisherin” is Colin Farrell’s show from start to finish. Never has the actor been given a role that has offered this much range, allowing him to be both puppy-dog adorable and sadly embittered. With “In Bruges,” Farrell found his muse with McDonagh, and here Pádraic wins over the audience early and never loses them, even when the perplexed farmer acts in a way that, as he calls it, “not nice.” Having scene partners of the acting caliber of Gleeson and Condon would raise anyone’s game, and here Farrell responds with a career-best performance that absolutely sings.

Complementing McDonagh’s vision is yet another top-flight score by Carter Burwell, and notable too is the cinematography by Ben Davis — watch how Davis’ camera uses light when it spills into an interior space. You can feel the beauty of Ireland just in that single composition, but there are many other wide-angle shots of the landscapes which will take your breath away. The delightful conceit of the film’s early scenes might have suggested a light tone would remain throughout. Still, the complexity of McDonagh’s screenplay adds weight and consequence as it builds, finally resulting in a shattering moment when we face the potential end of a friendship. There may be a civil war happening on the mainland, but there is a second war between brothers going on, this time in Jonjo’s pub. And how McDonagh finally resolves it is a thing of beauty.