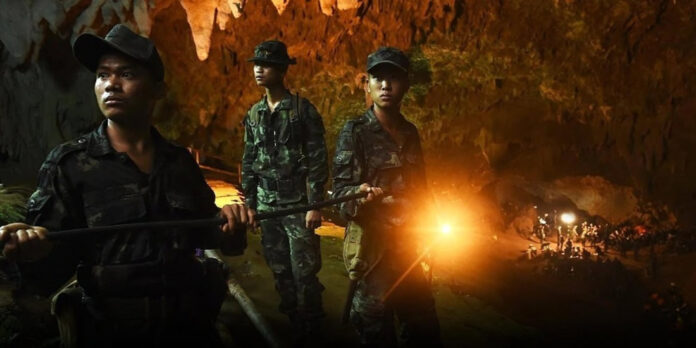 THE STORY – Follows the story of the Wild Boars youth soccer team who got trapped and their dramatic 2018 rescue.

​​​Between “Meru,” the Oscar-winning “Free Solo,” and now “The Rescue,” directors Jimmy Chin and Elizabeth Chai Vasarhelyi have established themselves as the masters of the nature-thriller documentary. They select stories that you might already know or heard about but explore them in such a riveting fashion that knowing the ending or not still has viewers on the edge of their seats throughout.

Departing from climbing (which both “Meru” and “Free Solo” focused on), Jimmy Chin and Elizabeth Chai Vasarhelyi instead look downward into the murky world of cave diving with their latest film, “The Rescue.” The headlines surrounding the Thai children’s soccer team trapped in a flooding cave are still fresh in everyone’s memories. The news stations carried that story non-stop for three weeks straight, keeping us posted on every update. We all know they ended up being rescued, and it was a true moment of international unity brought on by the herculean effort of thousands of people. What “The Rescue” explores, through interviews with the rescuers involved, footage taken from the event, and impeccable recreations, shows just how utterly insane and unlikely the said rescue actually was.

Part of what makes the film click is its engaging interview subjects. At the center of the rescue are two schlubby middle-aged British cave divers who were brought in to assist the Thai Navy SEALS, who had minimal assistance with cave diving during the rescue. These two are the ideal interview subjects as their wry senses of humor and tendency towards descriptive language put the listener right in the middle of the event’s chaos, understanding the stakes and the odds which were so incredibly stacked against them. The other rescuers who join the attempt, such as an Australian anesthesiologist, prove equally endearing. Together, they make the viewer a part of the rescue effort, taking us on a journey as we relive those three weeks of trials and tribulations back in 2018.

If the subjects provide a sense of levity and warmth, Chin and Vasarhelyi compensate by ratcheting up the tension through crisp editing, a pulsating score courtesy of Daniel Pemberton (“Spider-Man: Into the Spider-Verse”), and well-shot recreations of the cave rescue (featuring the actual real-life participants instead of actors). By the time the film reaches its final half-hour (actually depicting the rescue), the film has taken on all the trappings of a thriller. The viewer gets to appreciate just how many things could have (and did) go wrong as this unlikely but likable team fights against impossible odds.

If there are any flaws in this superb crowd-pleasing documentary, they are due to the limitations of adhering to reality (apart from the horrendous and tacky Christian rock-sounding original song that the Academy music branch may be unable to resist titled “Believe”). Although the filmmakers were willing to recreate aspects of the rescue, they refused (appropriately) to recreate the death of Saman Gunan, the Thai Navy SEAL who drowned during the mission. The limited interview access to Gunan beforehand means that he was only briefly referenced early in the film, somewhat jarringly, and then not mentioned again until his death. Additional interview footage featuring those who knew him would have provided the viewer with more of an idea of who he was as a person and would have added to the film’s emotional depth. And if coverage of Gunan was limited, Navy SEAL Beirut Pakbara, who died from an infection he received during the rescue, received even less exposure. The film clarifies how brave the navy SEALs were, but ultimately, their sacrifice deserved more attention than what is shown by Jimmy Chin and Elizabeth Chai Vasarhelyi.

Additionally, there was only a certain amount of footage taken by the divers of the boys when they were initially discovered deep within the cave. As a result, the film noticeably reuses the same shots multiple times. But again, the interest of not tastelessly recreating the moment of those boys being trapped for the sake of a documentary feature film is entirely understandable.

A few minor quibbles aside, “The Rescue” is mainstream documentary filmmaking at its finest. Jimmy Chin and Elizabeth Chai Vasarhelyi had a tall order before them in attempting to follow up their wildly successful and Oscar-winning previous film, “Free Solo.” Luckily, “The Rescue” is another slam dunk of a documentary experience, cementing Jimmy Chin and Elizabeth Chai Vasarhelyi as two of the very best documentary filmmakers we have working today. It’s the kind of film that inspires and reminds the viewer of humanity’s capacity for good, providing a much different type of story than “Free Solo” but just as thrilling, with the added bonus of being funnier and ultimately more emotional.