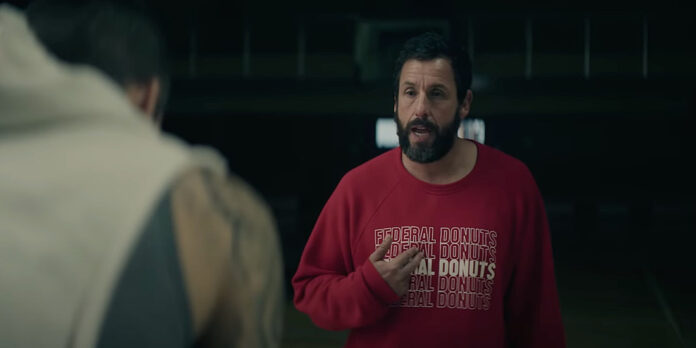 THE STORY – After a down-on-his-luck basketball scout discovers an extraordinary player abroad, he brings the phenom back without his team’s approval.

​​​​​Though it’s an accurate plot description, “Adam Sandler as a washed-up basketball scout seeking to prove himself with a new recruit” may conjure images of an overbroad comedy with gross-out humor and a Rob Schneider cameo. Thankfully, “Hustle” is nothing like that at all. Instead, the Sandman lays down the caricatures that gave him his superstardom to give this sports drama real weight with one of his very best performances. “Hustle” is an old-fashioned, understated crowdpleaser, even for those who couldn’t care less about sports. Jeremiah Zagar’s follow-up to his independent drama “We The Animals” is a sincere love letter to the game of basketball and its players.

Sandler plays Stanley Sugerman, a scout for the Philadelphia 76ers who needs a win in his life. Wanting to move away from the scouting world so he can coach and spend more time with his family, Stanley is facing adversity as the beloved 76ers’ owner (Robert Duvall) has recently passed away, leaving his hopes of any kind of career advancement put on the backburner for the time being. Traveling the world from Serbia to Senegal to Germany in search of the next great undiscovered star, Stanley stumbles upon Bo Cruz (Juancho Hernangómez) by chance at a random park game in Spain. Cruz is a young construction worker and single dad who didn’t even consider playing professional sports despite his God-given talents. Stanley is convinced that Cruz is the next big thing, despite the new owner of the Sixers (Ben Foster) declining to pursue him due to his troubled past and unmarketable star status in an industry that cares more about how one’s image will translate into profit than talent. Taking matters into his own hands, Stanley stakes his entire career on the kid determined to get him into the draft and change his life forever.

We’ve seen a thousand underdog sports dramas, and there’s no getting around the formulaic story of “Hustle.” Jeremiah Zagar’s vibrant direction infuses this well-worn story with an exhilarating spirit courtesy of some dynamic editing and camerawork. Even with the added benefit of such directorial flair, these stories have been told time and again because they simply work. It’s thrilling to watch someone so passionate about what they do work hard to succeed. And in this case, we see two versions of that from both Stanley and Cruz’s perspectives. Zagar’s not trying to reinvent the formula of such a story; instead, he turns the focus away from the goal of winning and toward the work itself. There’s not a single game in this film in which we are looking up at the scoreboard to see how many points someone is ahead. Instead, we’re focused on Cruz’s performance, and development as Stanley pushes his limits past their breaking point (proving why he should be a coach in the first place). Somehow, without keeping score, there are still plenty of heart-thumping thrills to be found in “Hustle.” Zagar skillfully can build tension less from the outcome of the basketball games and more from the internal pressure the players place upon themselves. Thanks to his commitment to keeping this sports drama centered on its characters, we best understand their goals and what drives them.

Zagar’s character-driven approach results in two pitch-perfect performances from its leading stars. This is easily one of Sandler’s best performances. He’s perfectly cast as a charming basketball scout who doesn’t quite fit on the business side of the game and feels more connected to its players, just as he’s strongly connected with his family (Queen Latifah plays his wife). Though not as meaty a role as he had in “Uncut Gems,” Sandler still brings an effortless dramatic weight to Stanley, making him instantly relatable and easy to root for. He continues to prove that he has layers as an actor that he simply hasn’t tapped into enough. Right alongside him is Hernangómez, the real-life NBA star who shines as Cruz. He’s not simply there to make the basketball look realistic as he nails the genuine emotion of a fish-out-of-water and also might get more laughs than Sandler does through some of his dialogue.

So much of “Hustle” works because of the understated, grounded visual style. Zak Mulligan’s cinematography fills every game with expressive movement, keeping us invested in Cruz and Stan’s world without letting the imagery get stale. Paired with Dan Deacon’s emotional score and the crisp editing by Tom Costain and Brian M. Robinson, “Hustle” delivers a conventional but well-told story that might’ve faltered in lesser hands.

After producing a number of juvenile comedies, “Hustle” is Happy Madison’s greatest film to date. It’s a thrilling time to be an Adam Sandler fan (“Hubie Halloween” withstanding) as he continues to pursue more challenging and authentic work. It would be disingenuous to say Sandler’s “playing himself” or finding easy roles as displaying this sort of naturalism is vulnerable, especially for a performer who’s mostly avoided these dramatic roles over a thirty-year career. He may have threatened us with “Grown-Ups 3” if he missed out on the Oscar nomination, but it’s exciting to see this new era his career may be embarking on.