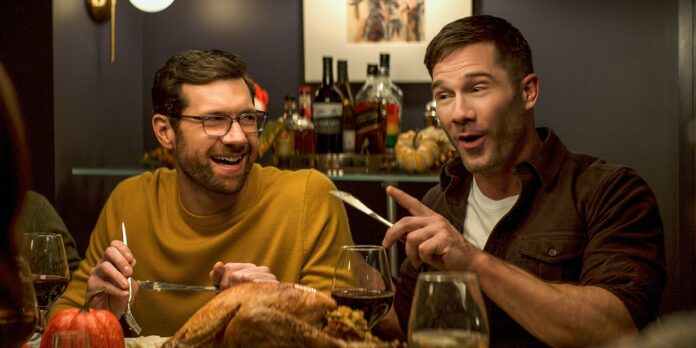 THE STORY – Bobby is a neurotic podcast host who’s happy to go on Tinder dates and content not to have a serious relationship. That all changes when he meets Aaron, an equally detached lawyer who likes to play the field.
​
THE CAST – Billy Eichner, Luke Macfarlane, Harvey Fierstein, Ts Madison, Monica Raymund, Guillermo Díaz, Guy Branum, Amanda Bearse, Jim Rash & Bowen Yang

It is a truth universally acknowledged among gay people that the whole “love is love” thing is kind of a lie. Yes, all love is created equal, but straight people and gay people love very differently, and straight and gay relationships are not the same. God bless Billy Eichner and Nicholas Stoller, then, for making “Bros,” a film that acknowledges this and then proceeds to show its audience exactly how gay relationships are special. Plus, the fact that they managed to do this while still fitting into the romantic comedy formula that has ruled Hollywood for decades makes it something of a miracle. “Bros” should be celebrated for just how superbly it threads the needle of being the standard bearer for a new generation of films that will not have this film’s burden of representation.

Bobby Leiber (Eichner) has parlayed his success as a podcaster and sometimes author (of children’s books about important LGBTQ+ icons such as “Are You There God? It’s Martina Navratilova”) into being on the committee overseeing the launch of the nation’s first LGBTQ+ history museum in his hometown of New York City. He’s incredibly smart, incredibly witty, and extremely cynical about relationships. So naturally, he is thrown for a loop when the conventionally gorgeous probate lawyer Aaron (Luke Macfarlane) seems to be into him. Aaron is also smart, witty, and not really into relationships, but in different ways from Bobby. Their differences are just enough to set sparks flying between them. How do two gay men in New York City navigate a relationship when neither of them “do” relationships?

Eichner and Macfarlane have fantastic chemistry together, perfectly nailing the slow burn of Bobby and Aaron’s relationship. Each of them is dealing with different kinds of traditional gay trauma – Bobby believes that he has only himself to rely on. At the same time, Aaron feels stuck in a conventional lifestyle, unable to do what he really wants to do. While they both fit the humor of the roles like a glove (Eichner did co-write the film, after all), it is the dramatic moments that pack the most punch. Eichner, in particular, shows a completely unexpected range, nailing not one but two big monologues in which Bobby bares his soul. Macfarlane has the trickier part, but he finds the cracks in Aaron’s stoic facade and burrows in deep, giving a performance that grows more interesting with each new scene.

The real star of “Bros,” though, is the screenplay by Eichner and director Nicholas Stoller. Any and every gay man will feel attacked by the scalpel-sharp savagery of Eichner’s observations on gay life, be they about sex, friendships, cultural history, or the sniping that occurs when the whole alphabet soup of the larger queer community comes together in an attempt to accomplish something. This satire is so funny, though, that gay audiences will simultaneously laugh and cringe in recognition with every other line the characters speak, while non-gay audience members will just laugh. This film is densely packed with laugh lines, and nearly every single one of them lands. This is impressive enough, but the dramatic moments are well-written, too, and stand out all the more for how deeply heartfelt they are next to the comedy, which in true Eichner style can come across as too knowing and self-satisfied at times.

What elevates “Bros” above your average major-studio rom-com is how much care Eichner and Stoller have put into teasing out the script’s themes. This is just as dense thematically as it is comedically, sometimes to the point of feeling overstuffed. But if it must be a bit much in order to pack in as much as it does, then so be it, because “Bros” does a fantastic job of presenting as many different perspectives from within the LGBTQ+ community as possible. Its leads may be white, but the scenes involving the museum committee (Dot-Marie Jones, Jim Rash, TS Madison, Miss Lawrence, and Eve Lindley) offer experiences from the non-cis-white-gay-male side of things in a humorous package that never undercuts or demeans them. Bobby himself is incredibly passionate about telling the stories of all the historical queer people who have never had their stories told, and in the end, that turns out to be the perfect meta twist for this film.

It is an astonishing indictment against Hollywood that it took so long for a major studio to release a film like this, with two gay leads falling in love and getting to have a happy ending, cast with all LGBTQ+ performers (and two straight ally icons in hilarious cameos). But now that we finally have it, so many more doors have been opened that never would have been otherwise. Because of this whip-smart, razor-sharp, big-hearted romantic comedy, we will get more films by and for people who haven’t had their stories told on such a massive scale before. The importance of this cannot be understated, and just in case you didn’t get it, Eichner makes it clear in the screenplay just how much it means for queer people to see these kinds of stories so that they have examples to follow. Gay and straight people are equal, but they’re not the same. And now, gay people have a major-studio romantic comedy to call their own, to laugh and cry over and watch over and over to revel in our community’s mating rituals. Not to mention, if audiences turn out in the droves that this genuine crowd-pleaser deserves, then we will get many more. Eichner and Stoller have set the standard. Let’s hope the films that follow in their wake have the same level of smarts, heart, and humor.

<b>THE GOOD - </b>Line for line, this is the funniest film of the year so far. But it is also equally thought-provoking in how it acknowledges the difference between straight and gay relationships and interrogates the importance of LGBTQ+ people discovering our history and telling our stories.<br><br> <b>THE BAD - </b>The burden of representation can make it feel overstuffed at times, and if you're not a fan of Billy Eichner's style of humor, this may not work for you.<br><br> <b>THE OSCAR PROSPECTS - </b><a href="/oscar-predictions-best-original-screenplay/">Best Original Screenplay</a> & <a href="/oscar-predictions-best-original-song/">Best Original Song</a><br><br> <b>THE FINAL SCORE - </b>8/10<br><br>"BROS"