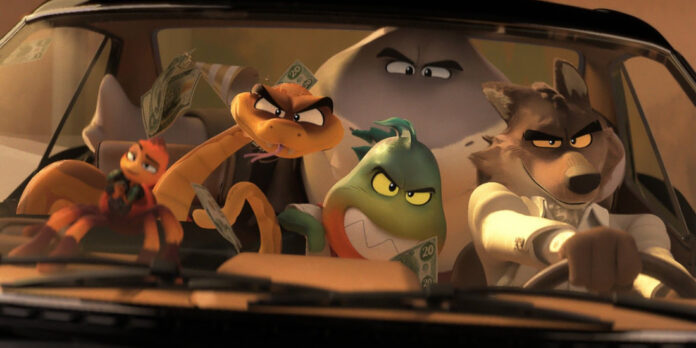 THE STORY – After a lifetime of legendary heists, notorious criminals Mr. Wolf, Mr. Snake, Mr. Piranha, Mr. Shark and Ms. Tarantula are finally caught. To avoid a prison sentence, the animal outlaws must pull off their most challenging con yet — becoming model citizens. Under the tutelage of their mentor, Professor Marmalade, the dubious gang sets out to fool the world that they’re turning good.

​​​I’ve always thought that François Toulour’s (Vincent Cassel) heist scene in “Ocean’s Twelve” was one of the best crime moments in cinematic history. Before he could get his hands on a Fabergé egg (or at least what he thought was one), Toulour had to get past a never-ending stream of lasers. But with crazy good agility, as he’s dancing to one of the catchiest electronic songs of all time, we got an extremely gripping and exciting scene that continues to be the film’s highlight no matter how many times I’ve seen it. Well, now even Toulour has to admit he’s been out-heisted once again. Not by Danny Ocean or his gang, but by a group of crazy animated animals led a big bad wolf. No one can outwit the police, toy with the police chief’s (Alex Borstein) emotions, drive through insane traffic – and down a long flight of stairs – and get away with it quite like these guys. Pierre Perifel’s feature directorial debut, “The Bad Guys,” manages to take all the things you love about Steven Soderbergh, Guy Ritchie, and Quentin Tarantino’s crime movies and puts them in animated form. With its fast-paced and smooth editing and surprises throughout, it’s a move that adults and children will easily enjoy.

The Bad Guys have earned a pretty bad rap for themselves – just look at their name. The group consists of leader and master pickpocket Mr. Wolf (Sam Rockwell), safecracker Mr. Snake (Marc Maron), master of disguise Mr. Shark (Craig Robinson), short-fused “muscle” Mr. Piranha (Anthony Ramos), and expert hacker Ms. Tarantula (Awkwafina), aka Webs. No crime is too big for this group, and everyone in the city is after them.

Seeing the Bad Guys in action is fun. Webs utilizes all eight of her legs when she needs to get into ultra hacking mode, while Mr. Shark shows why he’s the true master of disguise with a sparkly red number. These moments will make both adults and children laugh, and that’s exactly what you want from an animated film. In these scenes, audiences are also treated to some truly amazing animation. The opening robbery scene features sleek editing and fast-paced movements that only continue to build from that moment on. With each new plan they think of or attempt to execute, there’s plenty of energy that will remind you of different live-action heist movies from the last thirty years with a clear reverence from the filmmakers.

But there comes a day when all good things come to an end, and the group finally gets caught. Please don’t fret, though; they still have one more heist up their sleeves. Instead of going to prison, Mr. Wolf makes a deal that the group will go good. Under the mentorship of Professor Marmalade (Richard Ayoade), a brilliant guinea pig who is a model citizen, the group will learn from the best and finally leave their bad habits behind – at least that’s what they say. But along the way, Mr. Wolf begins to see the good in being good, even if his teammates aren’t necessarily on the same page. And when he gets closer to Gov. Diane Foxington (Zazie Beetz), he wonders if going back to his old self is worth losing all the good feelings and acceptance he’s finally received.

The vocal performances from the ensemble really make the film come alive. The core five are so vibrant and expressive in their voice acting that it’s hard to imagine any other actors filling these roles. The supporting actors also help make their characters shine and bring so much life to them, helping keep the film’s propulsive energy at a consistently high level. One ding that is worth mentioning is the less-than-sleek animation style. “The Bad Guys” doesn’t look as elevated or hyper-detailed as some other Dreamworks animated films, but it’s not something that sticks out due to the smooth and stellar animation editing.

“The Bad Guys” is a ton of fun that mom, dad, the kids, the older siblings, and even the babysitter can enjoy. With a great cast, sleek editing, and scenes that will remind you of your favorite heist films, it’s an animated feature that can’t be missed. But just remember to keep your eyes on Mr. Wolf and the gang’s hands at all times; you never know what they might try to pull from under you.

Powered by JustWatch
Share
Facebook
Twitter
Copy URL
Previous article
Adapting The Unadaptable: Why Some Broadway Shows Should Not Be Made Into Movies
Next article
A Special Look At Pixar’s Upcoming “Lightyear”