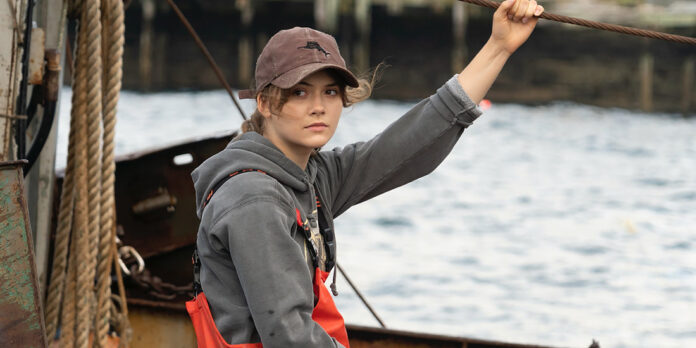 THE STORY – Ruby (Emilia Jones) is the only hearing member of a deaf family. At 17, she works mornings before school to help her parents (Marlee Matlin and Troy Kotsur) and brother (Daniel Durant) keep their Gloucester fishing business afloat. But in joining her high school’s choir club, Ruby finds herself drawn to both her duet partner (Ferdia Walsh-Peelo) and her latent passion for singing. Her enthusiastic, tough-love choirmaster (Eugenio Derbez) hears something special and encourages Ruby to consider music school and a future beyond fishing, leaving her torn between obligation to family and pursuit of her dream.
​
THE CAST – Emilia Jones, Eugenio Derbez, Troy Kotsur, Ferdia Walsh-Peelo, Daniel Durant and Marlee Matlin

An adaptation of the French Film, “La Familie Belier,” Siân Heder’s “CODA” (which stands for Child of Deaf Adults) is a crowd-pleaser of the highest order. It’s a sweet, sincere and heartwarming family drama that will work its magic over even the hardest of cynics. Nearly every element of Heder’s latest film (her follow up to another Sundance film, “Tallulah”) is perfectly calibrated to appeal to a mass audience in all of the best ways possible. It was the perfect opener for this year’s Sundance Film Festival and will surely be widely embraced by audiences once picked up by a distributor.

Ruby (Emilia Jones) is a teenage girl living in Gloucester, Massachusetts, and she is the only member of her deaf family that can hear. She lives with her parents (Marlee Matlin and Troy Kotsur) and brother (Daniel Durant), who operate a fishing business. Constantly being ripped off for their catchings, Ruby’s parents often need her to interpret for them but Ruby has dreams of her own, even if she doesn’t realize it yet. She is blessed with a lovely singing voice but has never received validation for how good she is because no one in her family can hear her and she’s not the most popular at school (you wouldn’t be either if you smelled like fish all the time). When she signs up for the school’s choir club to get closer to a boy she likes (“Sing Street’s” Ferdia Walsh-Peelo), she comes under the instruction of her teacher, Bernardo Villalobos (Eugenio Derbez). He is a overwhelming presence in her life at first as he’s constantly pushing Ruby out of her comfort zone and demands that she does not waste his time. However, over time, he helps her to find her confidence with her voice. As she progresses and her time in high school starts to end, Ruby must decide between her family and pursuing her own dreams.

Emilia Jones is not a newcomer but this will undoubtedly be seen as a breakout role for the young actress. Having to perform sign language while showcasing her vocal and dramatic talents, she is effortless in the lead role of Ruby and makes for a likable protagonist you want to root for. Ruby is an outcast not just to those at her high school but also to her family at times, having to serve as an interpreter for most of their issues instead of pursuing her own goals and Jones manages to garner a tremendous amount of empathy from the audience for how she conveys that relatable struggle.

Jones’s chemistry with every other cast member is apparent throughout. In fact, the entire supporting ensemble around Jones are all just as good as her. Eugenio Derbez has so much charisma and energy as Jones’s flamboyant choir teacher that he almost comes off as caricature but thankfully, it never veers too much into that territory. The same can be said for Ruby’s parents, played terrifically by real-life deaf actors, Marlee Matlin and Troy Kotsur. Both of them bring a high level of enthusiasm and humor to their roles that walk a fine line between being entertaining versus being offensive. However, much like Derbez, Heder finds the right notes within their performances and supplies them with enough naturalistic and affective writing to bring a level of authenticity that wrings our emotions. Both of them get their own dramatic scene with Jones in the film’s third act. Each one elicited a tremendous amount of tears in how beautifully Heder and the actors presented their relationship, not just as a hearing teenager trying to communicate to her deaf parents, but also just as a universal connection between mother/father & daughter.

While Heder’s screenplay predictably plays out precisely as you would expect any coming of age story to do so, there is enough earnestness within the film’s performances, tone, and message to avoid such harsh criticism. There is one sequence in particular where the sound completely drops out and we perceive the world as Ruby’s parents do as she’s singing and it is absolutely stunning. It will most likely be regarded as one of the best scenes of the year, even if we witnessed a similar type of moment just recently with “Sound Of Metal.” By that point, you’re so bought into Ruby’s journey and her relationships with the other characters that it becomes difficult to point out any flaws within this joy of a film. As many have pointed out, it probably would’ve played super well to a packed theater and I hope that wherever it lands, it still manages to have that same impact.