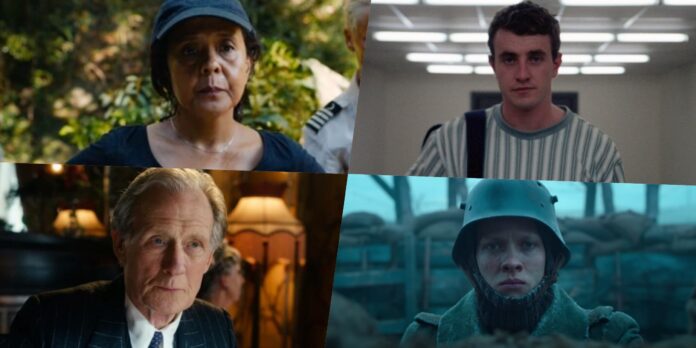 The 2023 BAFTA longlist has just been revealed, highlighting the films officially up for consideration to be nominated at this year’s ceremony, with final nominations arriving on January 19th. There have been some rule changes to the longlist from last year, in which most of the categories now have fewer selections to choose from, in the hopes that it encourages members of the voting body to view every film before voting on the nominees. This year’s Best Film category consists of ten films, as opposed to fifteen last year, which could give us a good insight into what may be the films most likely to break into the Best Picture lineup when Oscar nominations are revealed. The decreasing number of spots in this year’s list makes the omissions more noticeable, making it very clear which films the voting body loved and which ones they didn’t connect with. Here is a breakdown of what happened with this year’s BAFTA longlist…

There has been a growing trend within BAFTA to recognize British talent, and 2023 has been a fantastic year for British and Irish filmmaking. With Joanna Scanlan winning the BAFTA for Leading Actress last year for “After Love,” there are numerous categories this year in which independent British cinema could once again be rewarded on the big night. Unsurprisingly, Martin McDonagh’s “The Banshees of Inisherin” had a strong showing in the BAFTA longlist, securing places in Best Film, Director, Original Screenplay, as well as the four actors – Colin Farrell, Brendan Gleeson, Barry Keoghan, and Kerry Condon – all receiving their respected spots alongside some craft nominations. It is also great to see Charlotte Wells’ feature directorial debut, “Aftersun,” perform strongly after winning Best Film at the British Independent Film Awards a few weeks ago. The little A24 film picked up nominations in Best Film, Director, Original Screenplay, and Leading Actor for Paul Mescal, as well as a couple of craft nominations. What was somewhat surprising was the inclusion of “Living” in the Best Film category, which also performed well with a mention for Bill Nighy in Leading Actor and a place in the Best Adapted Screenplay list. A quick shout-out should also go to Colm Bairéad, who made the Best Director lineup with his film “The Quiet Girl,” beating out several prominent male directors to secure a slot on that list. While it is still uncertain how much impact the British voting block of the Academy will have on films such as “Living” and “Aftersun” on Oscar morning, seeing them recognized here and receiving nominations at BAFTA in a few weeks would be great and would be even sweeter to see them mentioned at the Oscars in a few days when nominations are announced on January 24th. Both could get acting, screenplay, and, yes, even Best Picture nominations.

The BAFTA longlist may have also revealed the frontrunner in this year’s Best International Feature Film race, as Edward Berger’s “All Quiet On The Western Front” cracked into the Best Film race after having a solid showing on the Oscars shortlist a few days ago. Not only that but the film overperformed in numerous categories, including the mention of Felix Kammerer in Best Leading Actor and Albrecht Schuch in Best Supporting Actor. In fact, “All Quiet On The Western Front” made it into every longlist that it was eligible for, earning a spot for Director, Adapted Screenplay, Casting, Cinematography, Costume Design, Editing, Makeup & Hair, Score, Production Design, Special Visual Effects, and Sound. While other films in the Best International Feature category did score places on the longlist elsewhere, including Best Director for “The Quiet Girl,” “Corsage,” “Decision To Leave,” and “Saint Omer” and a Best Original Screenplay slot for “Decision To Leave” and Best Adapted Screenplay for “The Quiet Girl,” none of them came near the total that “All Quiet On The Western Front” scored today. If Netflix were smart, they would realize this is their contender for Best Picture this year and do everything they can to push it for a nomination at this point.

Out of the two significant blockbusters contending for Best Picture at the Oscars this year, it is clear which one the British voting body preferred. “Top Gun: Maverick” had a great showing this morning, with mentions in Best Film, Director, Leading Actor for Tom Cruise, Adapted Screenplay, Cinematography, Editing, Special Visual Effects, and Sound. On the other hand, “Avatar: The Way Of Water” was only mentioned in Best Production Design, Special Visual Effects, and Sound. While this shows a lack of support for James Cameron’s sequel with the British voting body, it should not prevent it from scoring a Best Picture nomination at the Oscars, especially with the headlines made this week that it has officially become the highest-grossing film of 2022. This does solidify the idea, however, that “Top Gun: Maverick” is a powerful contender in this year’s Oscar race in numerous categories and that there may be a chance that Tom Cruise could slip into the fifth slot for Best Actor, especially if the Academy’s passion for that film is higher than we anticipate.

While there are films that over-performed, there are also films that have slowly started to slip throughout this year’s race. One example is “Women Talking,” in which director Sarah Polley failed to get a Best Director nomination at the Golden Globes. The voting bodies have been unwilling to pick a lady to back in the Best Supporting Actress race, and that trend sadly continued here as well. While Polley was comfortably able to score a spot in the BAFTA longlist for Best Director, the film did fail to crack the ten for Best Film. Ben Whishaw made the ten for Best Supporting Actor, but none of the ladies could enter the Supporting Actress race again. Whether that came to a vote-splitting issue or lack of passion for the film, both are factors that could eventually lead to no nominations at the Oscars. If “Women Talking” continues to underperform at upcoming precursors, particularly with SAG and PGA, it may not even make the Best Picture list on Oscar nomination morning.

It seems like right now, Steven Spielberg’s “The Fabelmans” is one of the strongest contenders to win Best Picture, but that film also did not have a fantastic morning going by the BAFTA longlist. Most notably, Steven Spielberg failed to score a place on the longlist for Best Director, the category “The Fabelmans” as of right now is most predicted to win at the Oscars. There is also no mention of Paul Dano or Judd Hirsch in Best Supporting Actor after both didn’t show up at the Golden Globes. The film should have been mentioned in Best Cinematography and Editing if it were that strong of a contender. Even the legendary John Williams failed to get a mention for Best Original Score. I would not worry yet about “The Fabelmans” not performing well in terms of nominations at the Oscars. Still, I would question if it will fail to make the top five in categories such as Best Original Screenplay at the BAFTAS, where the voting body has more passion for films such as “Aftersun” or “The Banshees of Inisherin.”

In comparison, the current leader of the precursors for Best Picture, A24’s “Everything Everywhere All At Once,” performed as well as expected in the BAFTA longlist. It scored three acting mentions – sadly leaning for Jamie Lee Curtis over Stephanie Hsu again in Best Supporting Actress – as well as expected placements for Best Film, Director, Original Screenplay, Casting, Editing, Original Score, Production Design, Special Visual Effects and Sound. While it would have been nice to see it score nominations in Best Costumes, Hair & Makeup or Supporting Actress for Hsu, it did exactly what it needed to continue its path towards a potential Best Picture victory while “The Fabelmans” showed signs of weakness.

The voting system for BAFTA works differently from the rest of the precursors, particularly when it comes to Best Director and the acting categories. A prime example of this is last year’s Best Actress category, in which none of the six ladies nominated at the BAFTAs were nominated at the Oscars. The nominations at the BAFTAs may only partially reflect what will happen with the Oscar nominations. Still, they indicate passion and support from the British voting body, which has a crossover with the Academy’s membership. To see the love for films such as “Aftersun,” “Living,” “Triangle Of Sadness,” and “All Quiet On The Western Front” at the BAFTAs potentially suggests that they could carry over. Still, we can never be sure what is just a British thing and what is a real contender across the pond. These longlists give us, as Oscar pundits, a chance to see what the general opinions of the voting body are as a whole and start to connect patterns, which has been able to show not only the rise of certain contenders as mentioned but the continued fall of others like “Women Talking” and another film which missed out big today, Damien Chazelle’s “Babylon.” The BAFTA nominations will be announced on January 19th, two days after the voting period closes for the Oscar nominations, meaning that the nominations themselves will have no impact on influencing the ballots of the Academy members. We will have to wait to see whether the passion from BAFTA carries over to the Oscars or if they go in a different direction this year.

What are your thoughts on this year’s BAFTA longlist? Do you think “Aftersun,” “All Quiet On The Western Front,” “Living,” and “Triangle Of Sadness” can perform just as well at the Oscars and land in the Best Picture lineup? Should we be worried about “Women Talking” and “Babylon” continuing to underperform? Please let us know your thoughts in the comments section below or on our Twitter account, and check out the Next Best Picture team’s latest Oscar predictions here.